A 4-0 blanking was definitely not a predictable script. Other than Harbhajan Singh, who predicted England would be blanked by India at home, no one seriously thought Mahendra Singh Dhoni’s team would hand such a drubbing to Australia. 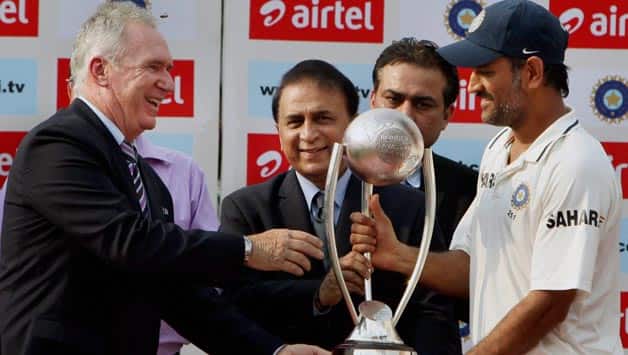 A 4-0 blanking was definitely not a predictable script. Other than Harbhajan Singh, who predicted England would be blanked by India at home, no one seriously thought Mahendra Singh Dhoni’s team would hand such a drubbing to Australia. Although, some may sneer at wins achieved on friendly, doctored surfaces, and some (like me) may not derive a great deal of pleasure from such wins, a 4-0 sweep nevertheless is a huge achievement for any Test side.

Having grown up watching the West Indies take England apart in what were known as “Blackwashes”, I had yearned for similar ruthlessness from Indian teams. Even when conditions were favorable for India to deliver such wins, our captains demurred. The 3-0 verdicts against England and Zimbabwe in the early nineties were the closest India came to being ruthless — Vinod Kambli being the destroyer in chief in those series.

Our “Fabled Four” [Sachin Tendulkar, Rahul Dravid, Sourav Ganguly and VVS Laxman] didn’t get to bask in such a series win, although they did deliver rare overseas series victories on the back of strong batting performances — the wins in Pakistan and England being the most notable with the drawn series in Australia and South Africa being very engaging.

A new India team has arrived on the scene and the retirements of Dravid and Laxman have hardly caused a hiccup. If anything, it appears that they overstayed slightly in an Indian sort of way. Tendulkar’s presence in the team has been rendered irrelevant by mainly Cheteshwar Pujara and by the smart Virat Kohli. Pujara’s mountain of runs and consistent performances, including fourth innings deliverances, have outshone even the genius that is Tendulkar. Pujara and Kohli’s consistency gives India the perfect cover to groom a replacement for the master.

Obviously, the hope is that this team takes baby steps overseas and does not get destroyed like Mohammad Azharuddin‘s side got drubbed in England in 1996 or Tendulkar’s team got blanked in Australia in 1999. Pujara and Kohli have sufficient pedigree and more miles in them than Dravid and Ganguly did on those two tours. Hopefully, the results are better. While a series win in South Africa this winter may be far-fetched, a fight would be well respected. Taking test matches into the fifth day will be a great beginning for a side lacking the quality that Zaheer Khan brought to overseas Tests as well as the spine that Dravid provided the batting.

The jury is still probably out on the opening combination. Shikhar Dhawan’s magnificent and confident Test debut augurs well, but more needs to be seen from him before anointing him successor to the genius that Sehwag has been.

Murali Vijay has done very well to cement his place. Although, at times, he has not looked convincing outside the off stump, he has shown guts in battling it out. He has heart, and that is a critical ingredient to succeed overseas.

Ravindra Jadeja is likely to play as the second spinner even overseas, with Ashwin being the main spinner. It means Jadeja has to clock more runs. His 45 in the Delhi Test was a promising start.

All of this means that Dhoni well and truly has steered India through a difficult transition with minimal fuss. A new look-team has emerged and is demonstrating a ruthless streak never before associated with Indian teams. It’s a matter of time before a Manoj Tiwary or a Rohit Sharma or Unmukt Chand or Ajinkya Rahane or other take Tendulkar’s place in the side, with Kohli  likely take the No 4 position in the line-up. And like all the transition that has happened till now, that too may become a non-event. Maybe that’s the greatest contribution that Tendulkar will make in that he didn’t leave the team in disarray with his departure.

We are fortunate to have Dhoni who has now led India to World Cup victories and a “Brownwash”.

A series win in Australia and South Africa are the holes in India’s resume. Will those too happen under Dhoni’s leadership? When Shane Watson was floored!