MS Dhoni, Sachin Tendulkar, Virat Kohli: Films that could be based on cricketers’ lives

MS Dhoni, Sachin Tendulkar, Virat Kohli: Films that could be based on cricketers’ lives

Shiamak Unwalla picks out films that could be based on the lives of MS Dhoni, Virat Kohli, and others.

There are some cricketers whose lives are so dramatic they can be made into films. On the other hand, there exist certain movies that could be seen as metaphors for the lives of cricketers. Shiamak Unwalla picks out films that could be based on the lives of MS Dhoni, Virat Kohli and others.

He was the hero India needed, but not the one it deserved. He made it his job to save the day repeatedly when all seemed over (remember all those last-over wins?) but was still criticised for the occasional failure. Batman beats villains to a pulp; Dhoni does that to bowlers.

There can even be a parallel drawn between the Harvey Dent-Batman relationship and Yograj Singh- Dhoni. Dent wanted to protect Gotham but was corrupted by the Joker. Yuvraj Singh wanted to serve Indian cricket, but his father Yograj attacked Dhoni. READ: Does the Indian cricket team deserve a better class of fans?

In the end, Batman put his image on the line, and did what he thought was best for the city. Dhoni retired midway through the Test series in Australia because he thought Virat Kohli was ready to lead.

This might be a bit of a stretch, but bear with us. Without a doubt India’s most popular cricketer of all time, Tendulkar was all about overcoming the odds. There are a bunch of stories about how Tendulkar learnt from his dismissals to come back strongly the next time.

In many ways, Star Wars Episode IV —A New Hope is one of the most iconic films of all time. One would be hard-pressed to find a film series that has produced six films (with a seventh on the way), numerous video games, cartoons, novels, comics, and a whole lot of merchandise. ALSO READ: Martin Guptill vs Captain America: Superheroes of ICC World Cup 2015

It all began with the adventures of Luke and Leia Skywalker, Han Solo, Obi-Wan Kenobi, and the others. Kohli has characteristics of the two main protagonists, Luke and Han. He is brash, impulsive, and roughish like Han, while at the same time young, energetic, and with a firm sense of duty like Luke.

A film based on dancing, overcoming hardships by dancing, and celebrating by dancing. In other words, what Bravo does every morning. While Chris Gayle, Darren Sammy, and Andre Russell have appreciable dance moves as well, none of them can come close to the sheer charisma shown by Bravo.

Step Up features a very young Channing Tatum (you might recognise him from Magic Mike, 21 Jump Street, or GI Joe), an outcast who does not play by the rules. His dance moves are stunning, and he is a cheerful, magnetic personality. Bravo has a problem with authority (or the WICB at any rate) as well, and he too is an upbeat, mesmerising presence on the field.

While it is not yet proven, it has long been suspected that AB de Villiers is not a native of this planet. For all we know, he too could be a superhuman alien sent from a distant galaxy, whose powers and abilities increase extraordinarily on Earth. Short of heat-vision, icy breath, and flight, de Villiers seems to enjoy a lot of similarities with the Man of Steel. READ: AB de Villiers: Don Bradman of this generation?

Superman is the mightiest superhero of all time, the most powerful member of the Justice League, and also largely affable, good-natured, and almost unaware of his greatness. While the movie Man of Steel might be a much darker version of Superman than we know and love, de Villiers is straight out of the comic books. He might as well start wearing a cape.

The Godfather Part I was about Michael Corleone’s ascent from the unwilling son of a mafia don to the new head of the family. Michael was still innocent and inherently good; someone who wanted to make a positive difference. The same might be said of the Srinivasan family’s initial cricketing endeavours.

The Godfather Part II sees Michael descend from honourable and good to evil and scheming. He has his own family member killed for going against him. By the end, he has all wealth and power he wanted, but none of the respect he yearned for. Need anything more be said of Srinivasan?

All images were designed by Rakesh Sharma. Not the cosmonaut, of course. 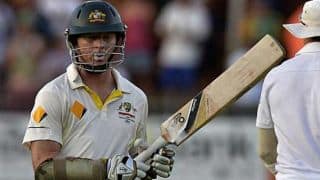