This is not an article listing statistical highlights of MS Dhoni s career as captain. There will be no analytical insights. This is an outcome of the reaction of a cricket-lover in the guise of a journalist, someone who is not a bona-fide Dhoni fan, but still...

This is not an article listing statistical highlights of MS Dhoni s career as captain. There will be no analytical insights. This is an outcome of the reaction of a cricket-lover in the guise of a journalist, someone who is not a bona-fide Dhoni fan, but has still felt something was amiss after hearing the news that out of the blue, realising that a massive change has taken place in Indian cricket. MS Dhoni, the face of India s limited-over cricket, has resigned from his position. There is no doubt about certain things, like who will be handed over the command, that if India will be able to perform as brilliantly as they have been in recent times, he has taken the call in such a way.

Being a cricket reporter, I need to keep myself updated of everything that goes on in cricket (even if I do not want to, in such a way). I left office after spending a long day covering two Ranji Trophy semi-finals (ironically, Dhoni s own Jharkhand lost one of them) and had just completed my dinner when my fellow hostelite came up to me to break the news.

Oh well, another hoax, I thought. But then, my Editor called me to confirm the fact. There was no way two completely unrelated people could have presented the same lie to me at the same time. Yes, the feared, the inevitable has happened. Captain Cool, who was present at the Gujarat vs Jharkhand Ranji Trophy match, had announced that it is time to step down from his duties as the leader.

Dhoni, for all he has done in his career so far, is a common name in any cricket related discussion. How he can be a crucial member of the side despite not leading the team has been argued innumerable times. My colleagues, and I am sure about this, will come up with a breakup of his performance as captain by the next day (even if they do not, the Editor will force them to).

For once, let us just for once step aside from all the technicalities. I am simply going to list down three things I will be missing when he represents India the next time, but not as a captain.

1. The ever-chatting voice behind the stumps: Wicketkeeping has often been listed among the factors that have improved Dhoni s qualities as a captain. While he has been a brilliant presence behind the stumps, pulling off blinders, stumping batsmen in a flash and running them out without even looking at them, what came as bonus were the gems the stump-microphones captured.

Listen to them yourself.

2. The art of dealing with media: Press conferences can be intimidating to any captain. The pressure of leading the side, dealing with defeats, keeping emotions under control in victories a captain has to go through it all. Captains do lose their cool. But Dhoni proved to be the boss in handling that, coming up with different ideas every single time. Who on earth can call up a journalist to sit along during a press conference? MS Dhoni is the name.

3. Unpredictability: Unpredictability has been a distinct quality of Dhoni. Anyone had hardly imagined him to announce retirement from Tests when he did. He nailed it once again as he stepped down from captaincy in limited-overs format when there was hardly any international cricket happening in India.

4. The art of being calm: All players surely feel the pressure but the captain probably feels it the most. But anyone has hardly seen Dhoni express either excitement or sadness. There is a reason they call him Captain Cool!

5. Enjoying from behind: What has been very interesting to notice over the years is Dhoni s ability to pull back when the team celebrated. The man leads from front and stands at back when the champagne bottle is opened.

Wait, did I say three things? I found five, and many more are still in my mind. Because be a fan or not, there is a lot Dhoni, the captain, reminds you of. 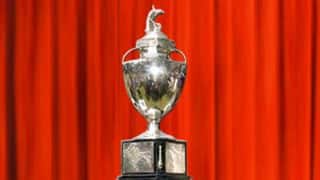