As a wicketkeeper-batsman, Dhoni has not only revolutionised the role but also the batting technique.

MS Dhoni, born on July 7, 1981, is one of the greatest limited-overs cricketers the game has seen. As a wicketkeeper-batsman, Dhoni has not only revolutionised the role but also the batting technique. Though a legend in shorter formats, Dhoni also has nine Test hundreds to his name and as a skipper led India to the No 1 spot in ICC Test Rankings. From a sea of great international knocks, Suvajit Mustafi lists down 13 across formats.

The MS Dhoni-Virender Sehwag partnership sealed it for India. Batting at No 3 in what was his fifth One-Day International (ODI), Dhoni came in to bat at 26, at the fall of Sachin Tendulkar’s wicket. He went on to add 96 with Sehwag off 62-balls. Dhoni smacked 148 from 120-balls, hitting 15 fours and four sixes. His knock masterminded India to a massive 356 and which finally helped the team win by 58 runs, to 2-0 in the series.

Dhoni had cemented his place in the ODI side. If his 148 had announced his arrival at the biggest platform, this knock was an assurance that the 24-year-old superstar from Ranchi was here to stay. India were set a target of 299 and Dhoni, batting at No 3, came out to bat in the first over. He struck an unbeaten 183 from 145-balls, smacking 10 sixes, as India chased down the score in the 47th over. The next highest score was 39. Dhoni, in his first year in international cricket, equaled Sourav Ganguly’s 183 which was then the second highest individual score by an Indian in ODIs.

Dhoni brought up his maiden Test ton in his fifth Test and scored 148 against Pakistan. He brought up his maiden ODI ton too in his fifth ODI against the same opposition. His Test hundred was a stunning display of counterattacking batting. He dealt the lethal pace of Shoaib Akhtar with same severity as he dealt Danish Kaneria’s spin. Bailing India out of trouble, he helped the side get a 15-run lead. Dhoni’s 148 came of only 153-balls, an innings that contained 19 fours and four sixes.

It was the fifth ODI of the series and Dhoni was in red-hot form. His 68 helped India reach a big total in the first game and his match-winning 72 not out at Lahore was applauded by all including the Pakistan President Pervez Musharaf. Already 3-1 up in the series, Dhoni displayed a remarkable calm as he once again stitched an unbeaten partnership of 146 from 99-balls with Yuvraj Singh, to help India win the match. With his 77 from 56-balls, Dhoni made the chase look like a cakewalk. India required 82 from the last 10-overs and they won it with 19-balls to spare.

Bangladesh had their tails up. In less than two months back, they caused a massive heartbreak when they beat India in the World Cup encounter which later resulted in their exit from the tournament. In what was India’s first assignment after the World Cup, India had rested some of their big names and a lot of pride was at stake. In the first match of the series, Bangladesh had posted 250 from their 50 overs. Batting at No 3, Dhoni was struggling with cramps and batted virtually on one leg, with a runner. The pain didn’t bother him enough as he guided India to a win with an over to spare. He ended up with a courgeous 91 not out from 106-balls and showed all that his batting is not just about brawn.

Dhoni once again displayed his brutal side of batting, this time for Asia XI. Led by Sri Lanka’s Mahela Jayawardene, Asia XI had already won the series 2-0. In the 17th over, Africa XI had the Asians reeling at 72 for five, when Dhoni walked out to bat. He stitched a massive 218-run stand with Jayawardene to take his side to 331. Dhoni scored 139 from 97-balls a knock that contained 15 fours and five sixes. It didn’t end there; he also affected three stumpings in the game as Asia pulled off another win.

An attacking batsman by nature, Dhoni had to curb his instincts in an attempt to save the Lord’s Test. In hindsight, the unbeaten 76 by Dhoni on the final day proved to be extremely crucial as India went on to win the Test series. Batting mainly with the tail, he fought for close to three and half hours till rain came to the side’s rescue.

It was the second ODI of the series and India had got off to a good start. Dhoni came to bat at 97 for three in the 16th over and continued the momentum powering India to 354. Dhoni scored 124 from 107-balls in an innings that contained nine boundaries and three sixes.

In the biggest stages of all, Dhoni delivered under immense pressure and helped India to lay hands on the World Cup for the second time. Chasing 275 in a high pressure World Cup final, Dhoni promoted himself to No 5 and added 109 with Gautam Gambhir. The Sri Lankan bowlers had no answer to Dhoni’s serenity under pressure as he took India home with 10 balls to spare. His unbeaten 91 from 79-balls in the World Cup final is truly iconic.

Despite ending in the losing side, Dhoni was awarded the man-of-the-match for his Herculean efforts. The game’s fate was decided in the first 10 overs and Dhoni only delayed the Pakistani win. In the 10th over, India were 29 for five and with 102 on the board the sixth wicket fell. In what was a true captain’s knock, Dhoni crafted an unbeaten 113 from 125-balls to take India to 227. The score enabled India to make a match out of nothing, but Pakistan sealed it in the 49th over.

11. Love affair continues at Chennai 224 vs Australia at Chennai, February 2012

Chennai loves Dhoni. For years he has represented the city franchisee in the Indian Premier League (IPL). The Indian skipper too loves the city. He saves his very best for this venue. India took on Australia in 2012 in tough times. Not only had India suffered two whitewashes in England and Australia, in late 2012, Alistair Cook’s England beat them at home. The Aussies were sharpening their knives and looking to repeat the Englishmen’s act. In the first Test at Chennai, Australia had put up 380 and had India 196 for six, when Dhoni stepped in. In what was a vintage Dhoni, he counterattacked and brought up his maiden double hundred. His 224 came off only 265 balls, as India took a 192-run lead. His breezy knock gave the bowlers ample time to seal the game in India’s favour. The captain set the tone and India went on to win the series 4-0.

If anyone had doubts over Dhoni being the best finisher, watch this video. On a difficult wicket at the Queens Park Oval, India chasing 202 to win the tri-series final, were cruising at one stage at 139 for three. Soon after Rohit Sharma’s wicket, Sri Lanka staged a remarkable comeback and had India at 182 for nine in the 47th over. The ever-calm Dhoni played it out with the tail and got the game to a stage when they needed 15 off the last over. The bowler Shaminda Eranga looked nervous. Dhoni missed the first ball but the game’s fate was decided in the next three deliveries a six over long-off, then a boundary over point and another one over extra-cover this time. The ecstatic teammates sprinted towards their skipper as India lifted the trophy.

In what was the third game of the series, Dhoni came in to bat at 76 for four in the 13th over. The Indian batsmen, barring Virat Kohli, didn’t seem to have answers to Mitchell Johnson’s chin music. With the help of Kohli, Dhoni began resurrecting the innings. But the latter fell for 68 with only 148 on the board. While wickets fell at the other end, Dhoni braved on. Ignoring a knee injury, Dhoni went on to belt an unbeaten 139 from 121-balls smacking 12 fours and five sixes, guiding India to 303. Till the very end it seemed the match was in India’s pockets, but the bowlers couldn’t defend 44 from the last three overs as James Faulkner’s 64 off 29, guided Australia to a remarkable win as they went up 2-1 in the series.

(Suvajit Mustafi consumes cricket for lunch, fiction for dinner and munches numerous other snacks throughout the day. Yes, a jack of several trades, all Suvajit dreamt of was being India’s World Cup winning skipper but ended up being a sports writer, author, screenwriter, director, copywriter, graphic designer, sportsmarketer , strategist, entrepreneur, philosopher and traveller. Donning so many hats, it’s cricket which gives him the ultimate high and where he finds solace. He can be followed at @RibsGully and rivu7) 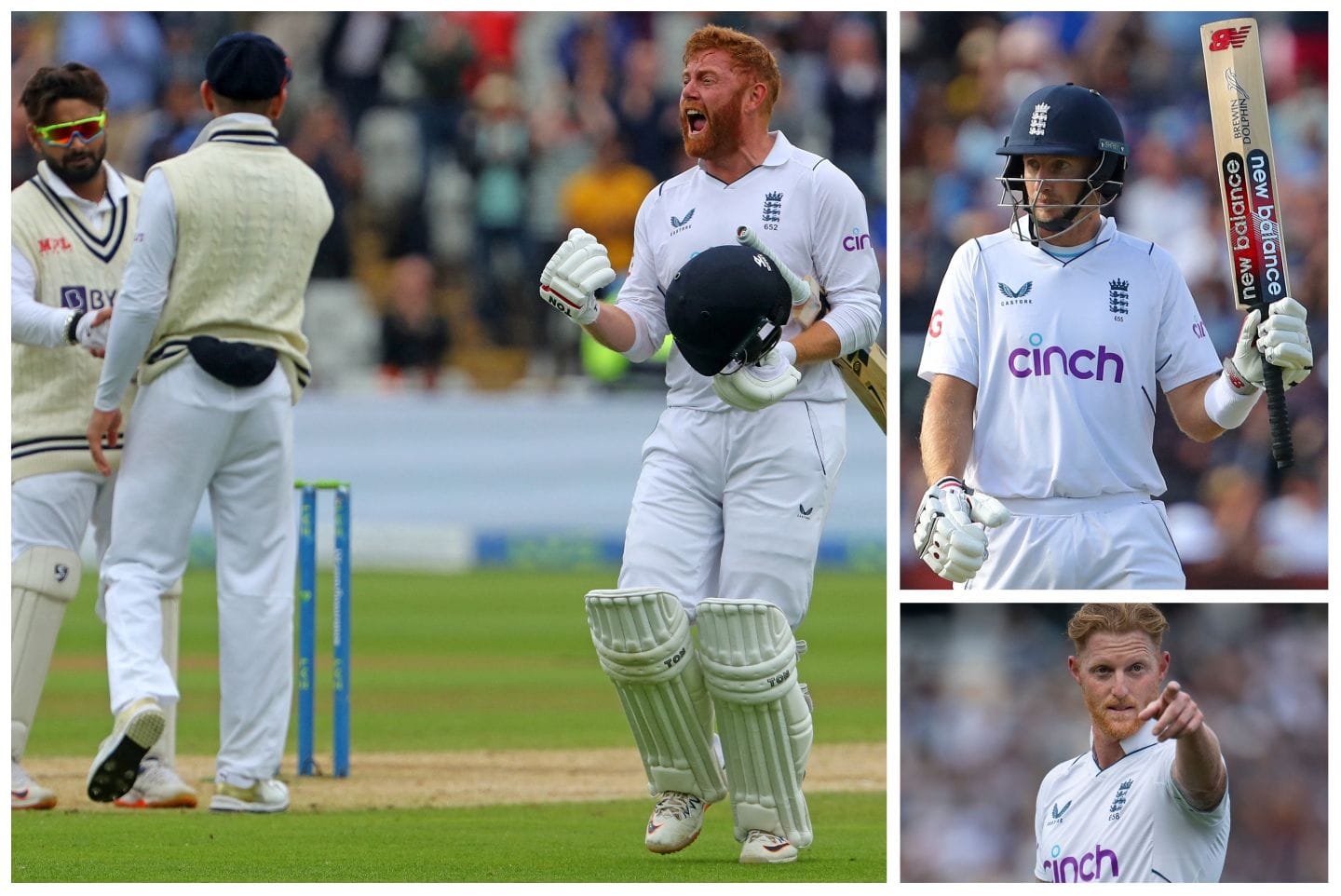 Rohit Sharma Excited to be on the Field Again, Says Was Very Hard to Watch From Sidelines