MS Dhoni becomes the first Indian captain to lead India in 50 Test matches. Abhijit Banare briefly looks at the journey of India’s most successful captain, his records and the challenges ahead.

If there’s any Indian cricketer who has come close to carrying the expectations of a nation as much as Sachin Tendulkar, MS Dhoni would be right on top of that list.

His style of captaincy and the ability to take risks is as unorthodox and unique as his batting styles. He has been an exceptional performer across all formats. As Dhoni adds another feather to his cap becoming the first Indian to captain in 50 Tests, Captain Cool with his calm demeanour will walk with the same intensity and focus against South Africa at Johannesburg in the first Test.

Updated before the start of first Test between India and South Africa.

It’s been a long journey for Dhoni who has witnessed different phases of Indian cricket as a captain. Right from leading a young team to a Twenty20 World Cup triumph, being a quiet leader with the experienced pros around in Tests, reaching the Test No 1 spot, the low phase of being whitewashed on tours of England and Australia, he has seen it all. If Sourav Ganguly showed that India can be consistently successful overseas, Dhoni carried the expectations of winning overseas. As a leader, he has exhibited an exceptional personality, keeping faith in each of his selections and backing the players well. The 26 Test wins further prove that he is the best Test captain India has ever seen.

The style of captaincy has remained constant, but the batting has not been impressive in overseas Tests. He has averaged 33.34 in 37 away Tests. Though it’s not bad coming down the order, but with the absence of seniors, Dhoni will have to be Mr Dependable down the order in Tests as well. He has hit some fine innings under pressure in the longest format as well, with a 224 scored against a hapless Australian attack this year at home. The home records have been exceptional as seen in the table below, but not the same away from home.

However, the biggest disappointment of his career till now has been the seven successive losses as captain and eight overall in overseas conditions, in 2011-12. At present, if there was any way to split Dhoni’s Test career in half, it has to be the pre and post 8-0 loss India faced in England and Australia. The leader who looked flawless, calm and supposedly termed as the man with the ‘midas’ touch came under extreme scrutiny during the phase. The tumultuous period also signalled the slide of a batting era with Rahul Dravid being the first among the trusted batsman to hang up his boots. The retirement of Rahul Dravid, VVS Laxman and Sachin Tendulkar will have a great impact. As discussed in this article about Dhoni’s overseas records, these three batsmen have performed well in all the Tests Dhoni has won overseas. Throughout these phases as a captain, credit goes to Board of Control for Cricket in India (BCCI) as well for backing him right through. Moving forward, Dhoni has to adjust to a young inexperienced batting line-up.

Dhoni has successfully shaped up the limited overs side, but the process is just in its baby steps beginning with this Test series against South Africa. And as much as it is a test of batting technique, bagging 20 wickets is all that matters eventually to win a Test. And India are not quite sure where the latter part is heading. The Indian skipper will be wise enough to understand that he doesn’t quite have the resources to take on the might of other formidable batting sides on tours. But he has to back his bowlers to be smart enough to use the conditions as much as possible. If the future of the bowling is anything to go by, Mohammed Shami looks like the only promising bowler who has the skill coupled with the pace to take things forward, while the rest are still a work in progress.

As far as the batting is concerned, the potential is visible. Each one is a match-winner in his own way. The level of maturity and skill that batsmen like Rohit Sharma, Virat Kohli and Cheteshwar Pujara have shown, the future of Indian batting is promising. But nothing would count if those promises are not delivered on the field. Ahead of the first Test, Dhoni emphasised on what the transition means:

“When the seniors were part of the side, we didn’t really have to worry much about how preparation is going. Because once you have played international cricket for a long time, you know your game and at the same time, you know how to prepare well in different conditions.

“They (Sachin, Rahul, VVS) had toured England, South Africa, Australia and New Zealand many times, so their basic plan to prepare was almost done and they just had to set up. But with the younger players, at times you have to guide them as to what needs to be done and what are the areas where they need to improve.”

This is the first Test since the last overseas loss in Australia and Dhoni’s side, which has lacked practice so far on this tour, will be eager to start the post-Tendulkar era on a positive note. 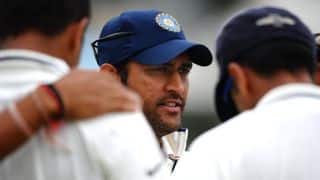 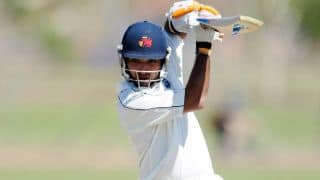 India tour of South Africa 2013: Ajinkya Rahane needs to bat in a role familiar to him