An innings where Mudassar Nazar brought the concept of scoring to a halt.

Mudassar Nazar’s famous ‘yawnathon’ began on December 14, 1977. Abhishek Mukherjee looks at an innings where a man brought the concept of scoring to a halt.

What would you expected on the first day of a series? When Mike Brearley’s England toured Pakistan in 1977-78, the series had some promise to be an exciting one. Both sides, after all, had done well in their previous series. While England had beaten India in their own den 2-1, Pakistan had also emerged victorious in New Zealand by a 1-0 margin.

The spectators could not be blamed if they had expected some bright, aggressive cricket from both sides. England had two debutants — the Somerset icon Brian Rose and the Yorkshire off-spinner Geoff Cope — in their side. Pakistan, on the other hand, went in with their new leg-spin sensation called Abdul Qadir.

Day One: The crawl begins

Wasim Bari won the toss and elected to bat on what seemed like the deadest of pitches. Things looked bad for England, more so as the Test was played during Pakistan’s experiment with the eight-ball over, which meant that the bowlers would probably be exhausted more quickly if there was a long partnership.

Sadiq Mohammad opened with 21-year old Mudassar Nazar. Both were from celebrated cricket families: while Sadiq was the youngest of four brothers to have played Tests for Pakistan (a fifth had also been twelfth man) Mudassar was the son of Nazar Mohammad, erstwhile Test opener and then the coach of Pakistan.

Nazar Mohammad, and more significantly, Sadiq’s elder brother Hanif Mohammad, did not think much of entertaining the crowd. The genes showed, and the pair went on defending on and on and on.

It took England 103 minutes to break through. Sadiq’s 67-ball 18 (sans boundaries, of course) finally came to an end when Geoff Miller trapped him leg-before. There was some excitement when Chris Old had Shafiq Ahmed out the next over for a duck. Pakistan were 49 for 2.

An enraged Mudassar jumped into prompt action. The process was simple: stretch the foot, block, plod, repeat. Bob Willis, John Lever, Old, Miller, and Cope were all tried out: not only did Mudassar seemed like getting out, he did not look anything remotely close to playing his strokes either on a featherbed of a pitch.

At the other end, an unfazed Haroon Rasheed carried on. Completely unaffected by Mudassar’s attitude, Rasheed played a few strokes in a valiant effort to keep the spectators awake. He soon went past Mudassar, who had absolutely no intention of doing anything but leave or block.

Mudassar reached his fifty just before stumps. He finished unbeaten on 52 after an entire day’s play. Rasheed remained unbeaten on 84, and Pakistan ended with 164 for 2. Exactly what Bari was trying to achieve remains unanswered, but whatever it was, it was far from entertaining.

Rasheed duly reached his hundred and continued the good work. He eventually hit one back to Lever for a 244-ball 122, which probably felt like a 30-ball hundred given the circumstances. He had hit 17 fours and — shudder, shudder — a six. The pair had added 180 in 298 minutes.

With his hundred coming up, Mudassar got slower, which one would think was only possible in theory, not practice. When he reached 99, there was a pitch invasion. Wisden described: “After one had been belaboured by police, running fights began. Police were chased across the ground, and four found refuge in the England dressing-room. Bricks and stones were hurled in the direction of the dressing-rooms and the VIP enclosure.”

An early tea was taken with Mudassar on 99. To the utter bewilderment of everyone, the rioters cleared the ground on their own to ensure play resumed on time. Even then, 25 minutes were lost. One can only wonder whether the riot was a reaction to the torture inflicted by Mudassar.

Then the moment arrived. Mudassar eventually reached the magic three-figure mark in 419 balls and 557 minutes. Both records stand unvanquished today, and given the pace at which runs are scored these days, it’s nigh impossible that anyone would ever break these records.

After he brought up his hundred Mudassar accelerated; he eventually hit one back to Miller for a 449-ball 114 with 12 boundaries. His dreary essay had included 12 hits to the fence. Javed Miandad’s 71 also came to an end soon, and Pakistan returned with 360 for five with Wasim Raja on 12 and Qadir on a single.

Pakistan went for quick runs on the third morning, with Raja hitting 2 sixes and Bari also joining in. Bari eventually stunned the world by actually declaring at 407 for 9 (though not before he allowed the last partnership to bat for 14 minutes). Miller and Cope finished with 3 wickets apiece while Lever had 2.

Mudassar’s effort had not gone too well with Geoffrey Boycott. The England innings began in a similar fashion with Boycott and Brearley adding 53 in 128 minutes before the English captain was run out. Sarfraz Nawaz struck soon, having Rose leg-before, and England finished on 85 for two. Boycott was on 38 and Derek Randall on 17, and England still required 123 to save the follow-on.

Randall, perhaps a tad disoriented with the proceedings, fell for a 70-ball 19 after a 139-minute partnership of 41. Whatever chance there was of Boycott opening up was gone with the dismissal. He crawled to his fifty in 290 minutes — 20 minutes more than Mudassar had — and threatened to claim the record.

Graham Roope, too, played his part, and the pair added 31 in 68 minutes before Iqbal Qasim produced a beauty: the ball pitched on middle-stump, eluded Boycott’s outstretched bat, and knocked the off-stump back. Boycott fell for a 267-ball 63 after 345 minutes. Mudassar’s record remained untouched.

A comparison between the two epics might be worth a view:

Qasim then caused some commotion, removing Roope and Old in quick succession. Suddenly England were 162 for 6 with still 46 left to make Pakistan bat again as Bob Taylor walked out to join Miller.

The gloom was lifted shortly; the pair batted for close to three hours till stumps. England avoided the follow-on (which meant a result was as good as ruled out) and finished on 246 for 6. Miller remained unbeaten on 71 and Taylor on 32.

In an inspired spell on the fifth morning, Sarfraz Nawaz removed Taylor, Cope, and Lever (the last two for ducks) inside a space of 2 runs. Brearley, however, was in no mood for a joke, and sent out Willis with appropriate instructions. When Willis eventually holed out to Qasim off Qadir, 97 minutes had elapsed; Miller was left stranded on 98 as England were bowled out for 288.

Mudassar and Sadiq went to bat after a 119-run lead had been acquired. Mudassar began aggressively to the surprise of everyone and fell for a 39-ball 26 with 4 fours before he was caught-behind off Willis. Pakistan were reduced to 45 for three before Rasheed and Miandad played out time.

– The second Test at Hyderabad (Sind) also ended in a boring draw. Haroon scored another hundred, Qadir picked up 6 for 44, Bari even made a sporting declaration on the fourth afternoon, asking the English to score 344 in 330 minutes. Brearley and Boycott ensured that England crawled to 186 for 1.

– With Brearley out of action, it seemed that there might be a change in tactics. Alas, the next captain was Boycott! England scored 266 at 1.62 per six-ball over, and all eleven bowlers bowled in the third innings, which turned out to be the last of the series. 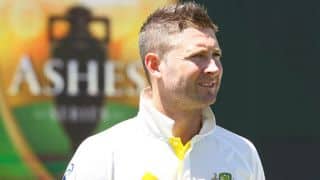 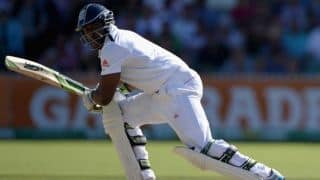