Mumbai Indians (MI) rendezvous with fame will be remembered for years to come.

The ‘slow starters’ tag came to the fore in the 10th edition of Indian Premier League (IPL) 2017 as well. Rising Pune Supergiant (RPS) had walloped Mumbai Indians (MI) by 7 wickets in their first contest. That, however, is not a new phenomenon. In the past, despite experiencing defeats in the initial stage of the tournament, the resilient Mumbai went on to lift the title. IPL witnessed the same: Mumbai aced the last hurdle and that too for the record third time. They showed intent and maturity to encounter roughest of times.

From defending champions, they had ended at No. 5 in 2016. They had exited with a win-loss ratio of 7:7 then. They, as a matter, of fact could not dish out right strategies. In addition, Hardik Pandya was nowhere close to his best. Parthiv Patel was not in his elements. There was no Lasith Malinga. There were no significant contributions from either Kieron Pollard or Jos Buttler. They even grieved the absence of Lendl Simmons midway. All went against Mumbai. However, this year, to simply put it, there was a different tale.

Although Mumbai maintained the trend of losing against Rising Pune Supergiant (RPS) in the inaugural match, they ensured it was a fairytale end. While Gujarat Lions (GL) and Royal Challengers Bangalore (RCB) were unfortunately hit by injuries in the initial stages, Mumbai kept their best foot forward since the beginning of the campaign.

There was unity. There was confidence oozing in every teammate. There were calculative steps taken. Malinga was back, playing in the best of his fitness. They played well as a unit. Above all, they did not succumb to pressure.

Another benefit for Mumbai was their new head coach in Mahela Jayawardene.

Major chunk of the runs flowed from Parthiv s willow this season. Unlike the previous one, none of the batsmen went past 400-run mark. He came of age with 395 runs at an average of 24.68 and strike rate of 134.81. He played a remarkable innings against RPS in Qualifier 2, on slow Wankhede pitch. Parthiv scored a resolute 52, albeit in a losing cause.

Krunal has been an exceptional find for Mumbai. He not only got the runs with the bat but worked his magic with the ball. Ending the previous season at 237 runs, he continued the momentum and ended at 243 runs with a strike rate 135.75. He kept his best reserved for the playoffs. One of his remarkable performances came against RPS in the final with a fine knock of 38-ball 47. He also ended with 10 wickets at an economy rate of 6.82, despite missing a few games due to groin injury.

Being selected for just 4 games in the previous season, Rana carved a niche for himself this time. The loss of Ambati Rayudu, one of Mumbai’s veterans, was a gain for Rana. Although his tally of runs (333) was similar to that of skipper Rohit Sharma in a fewer innings, he ended with a decent average of 30.27 and a strike rate of 126.13. Rana also shared most Man of the Match awards (2) along with Mitchell McClenaghan.

Mumbai weathered many storms in this edition. Most of their matches went down the wire, be it Bumrah s astonishing death-bowling during the Super Over vs Gujarat Lions (GL) or Pollard s blistering knock against Royal Challengers Bangalore (RCB) after Samuel Badree s hat-trick or Hardik s last-over anxiety against KKR to seal the spot at the top of the points table. Well, the last match must still be fresh in your minds, thanks to Mitchell Johnson.

Apart from Bumrah, McClenaghan was also effective with the new ball. He had ended at No. 3 in the Purple Cap list last year with 17 wickets. This year, McClenaghan finished IPL 2017 at No. 4 with 19 scalps, just below his teammate Bumrah.

The spinners, too, came good. Harbhajan s resurgence in the initial phase was remarkable. He conceded less than 6 runs in the powerplay and has also picked crucial wickets. Filling his shoes well was the highest bid (INR 3.5 crores) of Mumbai this season, Karn. His best came against KKR, earning Man of the Match for figures of 4 for 16 in Eliminator.

Surprisingly, all the three spinners Harbhajan, Karn and Krunal ended with an economy of well under 7.

Mumbai threw a brainer when they played their final league match against KKR at Eden Gardens, with as many as six changes to the side. As Rohit mentioned during the toss, they wanted to test their bench strength. Where many feared it would backfire, Saurabh Tiwary, Vinay Kumar and the fit-again Rayudu proved quashed all the critics. Saurabh and Rayudu ended with fifties, while Vinay Kumar bagged 2 wickets off his 3 overs.

Rohit Sharma leads from the front

There was not even a single moment when Rohit was bashed (or trolled) for his captaincy by the cricket fanatics. Be it bringing Karn within the powerplay against KKR in the playoffs or backing his bowlers, Malinga and McClenaghan, despite being whacked by Glenn Maxwell and Hashim Amla of KXIP. He also took some calculative steps like moving Pollard ahead or picking Karn over Harbhajan or Johnson over McClenaghan.

Being part of four IPL finals and winning three with his captaincy, Rohit enjoyed his spot as a captain. He also remains the only Indian player to be part of seven T20 titles.

Rohit Sharma, the batsman: Although he was selected for the upcoming Champions Trophy, Rohit could not fire on all cylinders with the bat. He had a torrid time against as many as five leg-spinners Imran Tahir, Rashid Khan, Samuel Badree, Rahul Tewatia and Amit Mishra. Adding to the woes, he earned just three fifties to his name.

The missing Slinga factor: From 24 wickets in 2015 to 11 wickets in 2017, Mumbai were craving for a Slinga innings. Malinga, who returned after one year layoff, had a difficult time to find the right length and variations. He has also leaked 50-plus runs on two successive occasions one against GL and the other against KXIP.

Although he was lauded for his bowling in the final for harassing Steven Smith with his yorkers, Malinga s best this season was seen against Delhi Daredevils (DD) where he ended with 2 for 5. Malinga, who has assisted the youngster Bumrah, probably got overshadowed by his student this year.

RPS defeated Mumbai in three consecutive matches before the all-important final. An early nerve usually catches up on the teams, but surprisingly they could not find momentum even in their hunting ground Wankhede. The third time, it left a scar on Mumbai s mind, losing in Qualifier 1 as well. However, when it was time to clinch the trophy, Mumbai gave it their all. An excellent comeback in the death over proved their supremacy.

Parthiv, Pollard, Rana, McClenaghan, Bumrah and Karn have particularly stood out for Mumbai, eventually finding their name in the Orange and Purple cap list. There is not much of a difference in comparison to last year, where Rohit was the only Mumbai batsmen in top 10.

This time, Parthiv found his spot at No. 8. As for the bowlers, Bumrah and McClenaghan continued to rule within top 10 from last year, ending at No. 3 and 4 respectively.

Their cabinet would be breathed a sigh after the humdinger at Hyderabad. However, sheer fortitude and performance as a unit were some aspects that made Mumbai superior in this thrilling 10th year of IPL. In the next edition, a different team may be dished out. Rohit, the crowd favourite, may not be seen representing Mumbai anymore. That said, the owners will bid money by abundance on him.

In all, Mumbai s rendezvous with fame will be remembered for years to come. 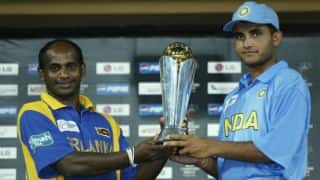