Mumbai Indians (MI) beat Kolkata Knight Riders (KKR) by five runs in Match 51 of Indian Premier League (IPL) 2015 at Wankhede Stadium, Mumbai. The thrilling encounter brought out some interesting moments in the all-important match for MI. Ayush Gupta takes a look at the highlights from the game that made it so interesting.

Rohit Sharma’s healthy knock of 30: MI captain Sharma played an excellent role as he smashed a 21-ball 30 after coming to bat at No. 3. He smashed five boundaries, and he scored at a strike rate of 142.9. He was also involved in a healthy 32-run stand with Kieron Pollard that helped MI build a proper innings. READ: Mumbai Indians clinch thrilling 5-run victory over Kolkata Knight Riders

Kieron Pollard’s unbeaten 33: Pollard was just brilliant as he came to bat at No. 5. As usual, he was in a mood to knock the ball all around the park, but this time, he was also sensible and played a composed innings, facing 38 deliveries including a four and a six, along with a strike rate of 86.8. He was involved in two healthy partnerships with Rohit and Hardik Pandya. READ: IPL 2015 most interesting tournament

Hardik Pandya’s unbeaten 61: Uncapped Hardik Pandya played the knock of the evening, smashing a 31-ball 61 that really helped MI build a huge innings and finish on a challenging total. He hit eight boundaries and two sixes. His strike rate read 196.8. The 92-run stand with Pollard (in which the West Indian contributed 24) was the turning point of the MI innings.

Shakib Al Hasan’s 2 for 22: Shakib Al Hasan struck twice early in the innings as he dismissed Parthiv Patel for 21 and Ambati Rayudu for 2. He kept a tight line and length.

Robin Uthappa and Gautam Gambhir’s strong opening partnership: Uthappa and Gambhir put up a solid opening stand of 45 to keep KKR in front right from the beginning during their chase of 172 before Uthappa was dismissed for 25 by Harbhajan Singh.

Gambhir’s exquisite knock of 38: Gambhir scored 38, adding 42 with Yusuf Pathan to help KKR reach a strong position in pursuit of their chase. He smashed five boundaries along with a strike-rate of 131 before being dismissed by Jagadeesha Suchith, after being dropped by Pandya the delivery before.

The 52-run blitz from Yusuf: Yusuf put up 30 with Shakib, and ended up scoring 52 from 37 with five fours and two sixes. He set up the chase for KKR before falling in the last over. At this stage KKR needed 11 from 56 balls.

Pollard’s last three balls: KKR needed 6 from the last 3 balls with Piyush Chawla (who had finished IPL 2014 final). However, Pollard kept an outside-off line, Chawla missed all three deliveries, and MI scraped through. 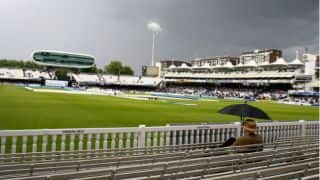 New Zealand's practice session washed out due to rain