Virat Kohli's Team India checked most boxes to emerge as the No. 1 contemporary Test side. But what about the openers?

The scorecard read India 25 for 2. The openers were back in the pavilion and Sachin Tendulkar was doing all the braving out in the middle. There was a time in the late 1990s and early 2000s when this sort of a scorecard was a common sight, especially when India toured overseas. There was Navjot Singh Sidhu for most of the time. The search was for the other part of the jigsaw. Even VVS Laxman was tried for a while. Thus, India competed but were never a force.

Imagine what Sunil Gavaskar would have achieved if he had a long-term opening partner with an average in excess of 40.

Coming to the turn of century, Sadagoppan Ramesh and SS Das provided respite for a while. Then came the temporary arrangements, Deep Dasgupta and Sanjay Bangar. The emergence of Virender Sehwag solved only half the problem. Aakash Chopra, Wasim Jaffer and Dinesh Karthik came into the mix much later but things remained wobbly until Virender Sehwag and Gautam Gambhir took charge.

They manhandled bowlers. By the end of 2009, India were the No. 1 Test side. Any team that has enjoyed success over a period in Test cricket has had a robust opening duo. History has seen Jack Hobbs and Herbert Sutcliffe, Sid Barnes and Arthur Morris, Bill Lawry and Bob Simpson, Len Hutton and Cyril Washbrook, Allan Rae and Jeff Stollmeyer, Desmond Haynes and Gordon Greenidge, Mark Taylor and Michael Slater, Matthew Hayden and Justin Langer, Sehwag and Gambhir, Graeme Smith and Herschelle Gibbs, and Andrew Strauss and Alastair Cook, among others.

Virat Kohli’s Team India checked most boxes to emerge as the No. 1 contemporary Test side. But what about the openers? No. There is no dearth. In an ideal world, Murali Vijay, KL Rahul and Shikhar Dhawan would have all broken into the same XI. There is a queue in domestic cricket. Again, in an ideal world, Prithvi Shaw or Priyank Panchal would have been part of the group by now. Mayank Agarwal is leapfrogging the queue and Gambhir is still active.

Kohli is spoilt for choices but rather than being in such a situation, he would have preferred to have a settled opening pair ahead of the overseas assignment. South Africa is a tough place to tour. The fact is well illustrated by the fact that India have not won a series there.

What do numbers say?

Vijay, 33, is the most experienced of the lot, though Dhawan and Rahul have better averages, but one needs to look into more numbers.

Contrary to popular perceptions, Vijay isn’t India’s knight in shining armour in overseas conditions. Dhawan and Rahul have better numbers and they score much quicker. What about playing in South Africa? Rahul is yet to play a Test there.

Barring that 97 against a quality South Africa pace attack at Durban, Vijay has done little of note. Not that Dhawan challenges him with his number. So will it be on current form?

While the analysis continues, let us know your preference:

Vijay, on his comeback, has slammed back-to-back hundreds. Dhawan has blazed to big scores and his ability to score at brisk pace helps the bowler buy enough time to inflict a defeat. Rahul, meanwhile, has been the most consistent of the lot. At the start of his career, Rahul would score only hundreds or single-digit scores. Then, in a bizarre turn of events, he has failed to breach the three-figure mark in 2017 but registered 9 fifty-plus scores from 14 innings.

So how does Kohli zero in on his openers?

Kohli will have to rely on the only warm-up tie. But is it a sample big enough to make the choice?

The back-to-back hundreds go in Vijay’s favour. India will also opt for experience. Vijay has that. In India’s previous tours of South Africa, England and Australia, Vijay, despite not being spectacular, showed the tenacity to grind it out at difficult phases. At Trent Bridge and Lord’s in 2014 Vijay was the differentiator. A few months later India lost at Adelaide and Brisbane. It is tough to overshadow Kohli but Vijay was the second-best. He went on to craft a hundred at Brisbane.

Dhawan was brilliant in New Zealand. Mind you, conditions can get seriously tough to bat there. In England and Australia, Dhawan ended up losing his place owing to ordinary outings. But it makes sense to place bet on Dhawan because of his experience and ability to score at brisk pace. Also, a left and right combination at the top always adds to the opposition s ire.

Rahul is identified the blue-eyed boy. Twenty months into international cricket, he became only the third Indian to register centuries across formats. He has done very well in his Test career so far but it seems he will have to wait for his chance. 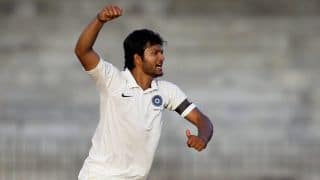