He has been Sri Lanka’s wizard of spin, the master of the doosra. 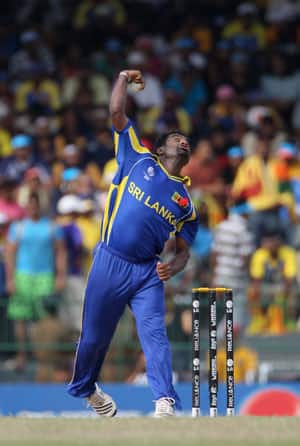 Whatever your thoughts on his action, you cannot deny that Muttiah Muralitharan has been engaging to watch. Those big eyes glaring at the batsman as he jogs in, the bent arm twirling up from behind him and then recoiling, the snap of the fingers as the ball spits out from his rough fingers, the fixation on its trajectory as it pitches and weaves its course, and the unbridled excitement on Murali’s face when he gets a wicket. And he’s gotten quite a few – 1345, to be precise, on the international stage. That’s a lot of smiling.

There is little left to be said about Murali. He has been Sri Lanka’s wizard of spin, the master of the doosra, even when the ICC outlawed it. The smiling assassin, sometimes bearded, who weaved magic with a cricket ball wherever he went. A peerless magician who alongside that spellbinder of the 1990s, Shane Keith Warne, captivated cricketing audiences with every delivery. The poster boy of Sinhalese-Tamil unity in a country cut up along ethnic lines.

Unlike Warne, the leg-spinning genius whose Test record he surpassed, Murali never revived a genre single-handedly. Unlike Abdul Qadir, whose idiosyncrasies made him a twirling dervish of a spin bowler, Murali’s quirky action – like Qadir’s, totally original – has been questioned and vilified and subjected to numerous tests under the dilated gaze of technicians in foreign countries. Once he even did it on television in a special cast to convince the sceptics. But unlike any other bowler in the history of cricket, Murali has united a nation torn apart by decades of civil war and come to symbolize what success in sport can achieve. His feats with the ball only tell part of his fascinating story.

Murali’s beginnings were modest – the son of a candy confectioner from Kandy and a member of the embattled Tamil minority. But he would go on to confound a generation of batsmen with his unparalleled variety, appetite and aggression. He didn’t have it easy. Born with a deformity of the elbow joint and a highly manoeuvrable wrist, he had to prove himself in domestic cricket as a Tamil in a country where his kind were looked down upon.

He came from a community that had never produced a cricketer. His action drew criticism and ridicule. He needed an astute leader in Arjuna Ranatunga to back him in board rooms and selection meetings and on the field when the legality of his action was questioned. Under Ranatunga, Murali bloomed in the late 1990s and by 2000 was the most feared bowler in world cricket. He became a sensation.

Like Warne, Qadir and Anil Kumble, Murali is a spinner with a fast bowlers’ instinct. Because of the slenderness of Sri Lanka’s bowling, Murali has been burdened and consequently bowled an obscene amount of overs. But he never stopped mesmerising with his sharp offbreaks and fizzing doosras. He has been Sri Lanka’s greatest match-winner and most famous citizen.

It was a performance against England that secured Murali’s legend, coming as it did in Sri Lanka’s first Test win on English soil. His match haul of 16 for 220 was the fifth-best match analysis in Test history; his nine for 65 in England’s second innings was seventh on the all-time list. On the way, he passed 200 Test wickets in his 42nd Test. In ODIs, Murali’s best figures came in an ODI against India in Sharjah when he scalped seven for 30, at the time the best analysis in the history of ODIs.

If Sri Lanka lose, it will be his last international appearance. If Sri Lanka win, Murali will sign off with his 350th ODI and step onto cricket’s largest stage looking to re-enact that captivating delivery motion one final time, in hopes that it will help delivery Sri Lanka the World Cup again. But irrespective of the outcome, Murali is unlikely to be far from the centre. He just doesn’t know how to do it any other way.