"My aim is to make a name for myself just like Abdul Razzaq did" : Hammad Azam

"My aim is to make a name for myself just like Abdul Razzaq did" : Hammad Azam

Hammad Azam spoke about the objectives behind his current stint in club cricket in England, frustration at not being able to become a regular in the Pakistan team and his aspirations for the future.

Pakistan all-rounder speaks about the aims behind his current stint in England, his disappointment to establish himself as a regular member of the Pakistan team and advice from Younis Khan.

When Pakistan’s newly appointed Chief Selector Inzamam-ul-Haq recently spoke about the lack of quality all-rounders in Pakistan cricket, there appeared to be plenty of truth in his statement. It is a fact that not since the decline in form of Abdul Razzaq, Pakistan have yet to see an all-rounder who could continue with the high standards set by the likes of Imran Khan and Wasim Akram.

Amongst a list of potential aspirants to the all-rounder crown for Pakistan, twenty-five-year-old Hammad Azam appears to have all the qualities needed for the job, yet his international record to date indicates otherwise. In an interview with PakPassion.net, Azam spoke about the objectives behind his current stint in club cricket in England, frustration at not being able to become a regular in the Pakistan team and his aspirations for the future.

A stint in England has long been a recommended form of developing one’s game, especially for sub-continental players, and that is one of the reasons why Hammad Azam is currently featuring in the North Staffordshire and South Cheshire League for Ashcombe Park. Speaking on his decision, Hammad stated “I have come over to England to play club cricket and gain experience in playing in English conditions which is something my seniors have always advised me to do.”

Whilst a player can gain valuable experience playing in conditions different from what he is used to at home, Hammad has set himself some higher goals by improving his skills in pressure situations which he would be put in as an overseas professional for his team.

“The fact that I am an overseas professional puts me in a position where I have to bat with a lot of responsibility which is crucial as an all-rounder and also helps me to develop my temperament. I am glad to say that I have played some good innings so far and have been able to build my innings with the right temperament and it seems, so far, that I am achieving the aims I have set for myself during this summer in England.”

If his current run of good scores is any indication, Hammad Azam’s tenure with Ashcombe Park is proving to be a successful one and an experience he is clearly enjoying

“It’s always a challenge when you play away from Pakistan as wickets back home are batting-friendly whereas here in England, the wickets and conditions suit bowlers a lot more. Despite that I have managed to put in scores of 116, 75 and 63 and am currently the leading run-scorer with my club. I suppose one can say that the best players are those who can adapt to new conditions and this is also what I am trying to accomplish.”

The feeling of optimism which the appointment of a new Chief Selector has introduced for some of the players, who felt neglected for unfair reasons by previous committees is palpable. Inzamam-ul-Haq’s recent statements on looking past statistics when selecting players would have given new hope to Hammad as he has long maintained that he deserves more chances to play for Pakistan to prove his true potential. All he wishes for is a consistent run based upon his domestic record and the rest, he is quite happy to leave in the hands of the selectors as he added “There is always hope, especially with the new selection committee in place. I can only hope and wish that with this new set-up I will be noticed by the selectors when I go back and play domestic cricket and put in some good performances. I would like to emphasise that it is indeed frustrating that I have not been selected for an international game again since that series against Zimbabwe in 2015. I performed well with United Bank Limited(UBL) in the previous season but despite that I am not even part of the Pakistan A team which is frustrating.”

Of course mere expression of intent cannot be the sole reason for any player’s inclusion in international sides and the selectors do look at what the player is doing to improve himself and to work on his possible deficiencies. This is an area in which the Pakistan all-rounder is keen to show his progress.

“There is always room for improvement for any professional cricketer. In my case, I am working hard to improve my batting and to show that I can perform a role in the middle order by playing long innings instead of being used as a slogger down the order. This would also be ideal for my position in my department’s batting order as well. Of course, I am also working to improve my bowling as I hear comments about my bowling not being that effective or lacking pace. I do take wickets but for some reason that is not considered good enough, so all I can do is to work on that aspect as well.”

The Pakistan selectors have always stressed their preference for players who impress in domestic cricket. Hammad Azam may have been disappointed by his lack of playing time in the recently concluded edition of Pakistan’s premier Twenty20 tournament but he is determined to make amends by performing well for his First-Class team in the Quaid-e-Azam trophy tournament, stating “I played three games in the Pakistan Super League but had to sit out the rest of the games which was a little disappointing. Regardless, the fact is that my biggest opportunity to impress is by playing for my departmental team, UBL, in the Quaid-e-Azam trophy. I would have loved to have taken part in the ongoing fifth Corporate Twenty20 tournament as that is televised and is quite popular back home but the opportunity to gain valuable experience in English conditions was more important for me.”

The road to establishing himself in the Pakistan team appears to be long and filled with uncertainties but what Hammad Azam can count on is some good advice to help him through the tough times. There could be no better person to offer him words of wisdom than Pakistan’s veteran record-breaking batsman, Younis Khan, whose advice appears to have had profound effects on Hammad Azam’s outlook towards cricket.

“Younis Khan is my captain at UBL and he has been full of praise for me. He has always tried to instil confidence in me which is very important. He always advises me to continue improving myself just like he looks to do, even after so much experience at the international level. He is always looking to learn new skills and looking to improve his game. He also stresses the value of self-discipline and tells me to continue working hard and leave the rest to the Almighty when it comes to matters of selection in the national team”

To most observers of Pakistan cricket, Hammad Azam seems to have all the makings of a competent all-rounder but it remains a mystery as to why he has not been able to deliver the performances which would surely set him up as Pakistan’s “go to” all-rounder. There is little doubt about his desire to rise through the ranks and to defy his detractors but like many Pakistan players vying for the attention of the selectors, he could do with a consistent run in the Pakistan side. Until that happens, Hammad Azam has no other choice but to not lose hope and persist with his desire to prove himself.

“I have played sixteen international games over a period of five years and to be honest, the progress of my international career has been a little disappointing for me. However, just like I rose to fame in my Under-19 years, I would like to repeat the same for myself at the domestic level and eventually at the international level as well. My aim is to make a name for myself just like Abdul Razzaq did for himself and Pakistan in international cricket. I suppose all one can do is to keep on performing to the best of their abilities and hope for the best. At the end of the day, the selection committee has its own views as does the captain so there isn’t any point being disheartened and one has to remain positive about these things,” he concluded.

When George Bailey was interrupted by a 'Cock' 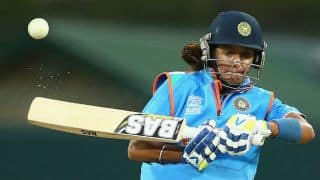