‘My fitness is not an issue’

‘My fitness is not an issue’

Sadaf Hussain, one of Pakistan's most talked about young fast-bowlers, is yet to make an international appearance.

Sadaf Hussain, one of Pakistan’s most talked about young fast-bowlers, is yet to make an international appearance. With 247 First-Class wickets in 51 matches including 20 five-wicket hauls and ten 10 wicket hauls to his name, the continued absence of the 25-year old Sadaf from even the Pakistan “A” team defies logic. In an exclusive interview with PakPassion.net, Sadaf spoke about playing league cricket in England, quashed rumors about his fitness and explained why he feels that he deserves a chance to play for Pakistan.

PakPassion (PP): What are you hoping to achieve by playing league cricket in England this summer?

Sadaf Hussain (SH): Basically, it gets very hot in Pakistan around this time of the year [in Pakistan] and the season ends around that time. The heat removes the motivation to keep oneself fit and in practice. Over here [in England], we have a match on Saturday and then we have training for two days during the week where we do practice as well as ground work. In that way, a player remains fit and primed for the games. So, all in all, my aim here is to stay fit, improve my bowling and also to be able to get match practice during this spell at the Burslem Cricket Club.

PP: You must also be benefitting from the experience of playing in English conditions?

SH: Yes, definitely, one does gain a lot of valuable experience of playing in such conditions. The fact is that the team is depending and relying upon the performance of their professional players who need to step up and take the responsibility of helping the team. This requires a lot of hard work from the professional which can only be beneficial for my experience and development.

PP: You seem to be doing really well during this stint with Burslem, how do you feel about this?

SH: Thanks to the Almighty, I am feeling very good about this season. Like I said, if the team is relying on you as a professional player, then you have to step forward and take on the responsibility of making sure that the team wins. Our aim is to get promoted to the Premier League in the North Staffs & South Cheshire League as we are currently in Division 1 and the team is relying on me to help them achieve this goal as I am their main bowler. As a result, in almost every game we play, I am bowling up to 22 overs or the maximum I can bowl in those games. Thankfully, in part due to my efforts, the team is currently placed as second in the league. I did miss the first three games of the season as I arrived late in the country, but despite that, my performance remains at the top level as I am the leading wicket taker in the league. I am very pleasing with that as my closest rival is about seven wickets behind me. Even as far as the team situation is concerned, another victory could well see us at the top of the table.

PP: Can you tell us about the truth behind the reports regarding your fitness? According to reports, you fainted during a fitness test at the NCA?

SH: Basically when I finished bowling in the Quaid-e-Azam Trophy, I was really tired after putting in so much effort. I rested for a month and also attended a wedding of a close relative, so there was a total break from cricket. I didn’t have any inkling that a tour of Pakistan A for Sri Lanka would be announced. And when the call came for me to make myself available, it was completely out of the blue. There was no way I could make an excuse of non-activity as that would have reflected very poor on me, but the fact is that I was being asked to get myself ready after almost two months of not playing any cricket. I accept that it was my mistake. Despite all that, I took part in the bleep test in the morning and got to level 15. At that point, they told me that due to some technical reasons, they had postponed the test to the evening. When I then did the test again, I got to level 16, but then stopped to take a breather. This somehow was transformed by some media into reports that I had fainted, which is untrue.

The fact is that I have been one of the top bowlers in domestic cricket and probably the one who has bowled most overs as well. You don’t get to that level of performance by bowling a few overs and without fitness, especially when I have bowled for long periods, sometimes for whole sessions during matches. Let me tell you that bowling in Pakistan domestic level is not that easy. You cannot be rated as one of the top five bowlers in domestic without hard work. I have played in the blistering heat of Karachi with the Kookaburra ball in all four-day and one-day games; I never fainted there, so clearly fitness is not an issue.

Whilst we talk about my fitness, we seemed to have selected players who were below fitness levels so I am afraid, it appears that such matters are more a question of fate rather than anything specific. My view is that all I needed was one week to get myself back in shape and be included in the squad on the basis of merit alone, but that was not to be. Let me be clear though, I am not complaining as I accept my mistake here and neither did I make an issue of it at that time otherwise people would accuse me of making excuses. Pakistan A were supposed to play three one-dayers on tour and given the amount of cricket I play in Pakistan, I would have had no problem playing in these games in terms of fitness.

I don’t profess to have magical powers like access to Aladdin’s magical lamp which has granted me these statistics! But the results are there for all to see. I have taken wickets against all the majors in domestic cricket and played at the highest level I can play in Pakistan, but I suppose it’s down to the fact that you will not get selected if the powers that be choose not to do so.

PP: Does it bother you that bowlers like Rahat Ali, who you have outperformed at the domestic level, keep on getting selected ahead of you?

SH: Let’s look at the selection for the 2015 World Cup squad. Can someone explain on what merit was that squad selected? The only reason we play domestic cricket is that when you perform well at that level, you will be selected to represent Pakistan at the international level. I was the top performing bowler in a domestic competition which featured Pakistan’s top eight teams. Did I not deserve a chance? Or, at least, an explanation why I wasn’t chosen for the 2015 World Cup? Was my bowling of low quality? Did I not take enough wickets or give away too many runs? Why was I sidelined in this way and even could not find a place on the A tour squad? Look at my record for the past five years and tell me if I have ever dipped below the top five bowlers in those years? I suppose it’s now down to divine intervention now as it appears to me that regardless of as many wickets as I take in domestic cricket, only the Almighty can ensure that I will be able to find a place in the national squad. I have come to the conclusion that there is no point holding any grudge against PCB, selectors or coaches — when the time is right, I will get my chance.

PP: Some former players seem to indicate your lack of pace as the reason for your exclusion from the national squad. How would you respond to that?

SH: Let’s look at it objectively. Among the fast bowlers in Pakistan who are considered extremely fast we have the likes of Wahab Riaz and Rahat Ali. How many five wicket hauls do they have in four-day and one-day games? Do you think if I lacked pace that I would have taken so many wickets in domestic cricket? Are we saying that there are no international level batsmen who play in Pakistan domestic cricket? We have our top players playing for departments like HBL, ZTBL etc so that is not the case. And coming to my actual pace, am I bowling at 120 or 125 kmph? Of course not! I am close to 130-138 kmph which is a decent speed to bowl at. Compare me to the likes of Ehsan Adil or Imran Khan and you can see I am no different in speed to them. It just seems that some incorrect facts or rumours have been spread about me and everyone seems to believe that. The fact is no one is willing to take a stand in my favour. It’s really every man for himself. And frankly speaking, what benefit will anyone get from taking my side on this issue?

SH: That is true to a certain extent, but in recent times, the ball used in the one-day domestic cricket competition has been similar to the Kookaburra and we didn’t encounter any real problems in terms of shape or bounce.

PP: What message do you have for the selectors? Is there any aspect of your performance that you would like to draw attention to?

SH: I would request the selectors to ensure that there is good bench strength for the Pakistan team. Given that we are precariously placed in the ICC rankings for One-Day Internationals, it would be a wise idea to have good backup to ensure that the current crop of players feel pressure to perform. I would ask the selectors to not ignore good domestic performers and at the least invite them to the NCA to help them improve. As far as my fitness is concerned, why not call me to the NCA and work on my fitness if it is such a big issue? Finally, I would urge and plead with the selectors to give domestic players who perform well at that level a chance to shine as well.

‘Waqar Younis has also asked me to work on the grip’

“The crowd support in Pakistan was awesome” 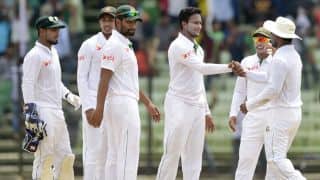 South Africa lose initiative against Bangladesh, reach 165/3 at tea on Day 1 of 1st Test at Chittagong Cheteshwar Pujara: No technical flaws in my game