On September 3, 1996, a Singer World Series Cup match was delayed by eight minutes because the bails could not be found. Arunabha Sengupta recounts the day and how the four little pieces were ultimately unearthed.

It was a low key One-Day International, the fifth match of the Singer World Series. The recently-crowned world champions took on the minnows of the day, and as expected cruised to a comfortable 6-wicket win with 18 balls to spare.

Muttiah Muralitharan bowled his customary tight and tormenting 10 overs, Aravinda de Silva raced to a characteristic 127 from 123 balls. With the Flowers (Andy and Grant) and the Whittalls (Andy and Guy) it looked a typical early Zimbabwe side, plenty of siblings and cousins sharing the dressing room; although Paul Strang turned up alone, without brother Bryan tagging along.

However, the biggest drama in the match took place before it got under way.

For all his run-ins with the Indian cricket teams over a decade and a half, umpire Steve Bucknor faced perhaps the biggest challenge of his career. The players had assembled. The spectators were waiting with anticipation — the national appetite freshly whetted by supreme success. But the match could not be started as the four bails were nowhere to be found.

Bucknor and fellow umpire Cyril Mitchley spoke animatedly to the officials present at SSC. With their years and years of experience, the two tried to figure out the mystery of the four little pieces of equipment. From his comfortable third umpire’s perch, BC Cooray emerged into the sun and joined the hunt. Match referee John Reid was probably frantically flipping through the rule book, looking for the procedure to follow when bails went missing.

Paul Strang and Grant Flower waited patiently at the wicket, exhausting their entire routine of shadow practice. Pramodya Wickramasinghe marked his run up more than once, the ball clutched in his hand. The fielders stretched and limbered up, paused, and stretched and limbered up again. With each passing minute murmur around the confused stadium grew uncomfortably louder.

After eight long minutes, each of them more protracted than the last, the missing bails were discovered in the pocket of one of the groundsmen. Perhaps to save him eternal blushes, the records of the day, including Wisden, do not identify the absent-minded fellow by name.

When the match was finally started, the fracas seemed to have got to Wickramasinghe, who promptly bowled five wides in his first over. Thus, after about 15 minutes beyond the official start, the scoreboard finally registered one over. 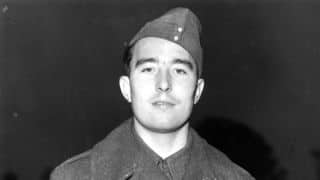 Second World War stops cricket - but, not quite