Having survived potentially the worst possible circumstances as BCCI President, N Srinivasan can only grow stronger from here. It continues to be a sad story for the rest, but Abhijit Banare looks at the situation from the perspective of the main man in the spotlight. 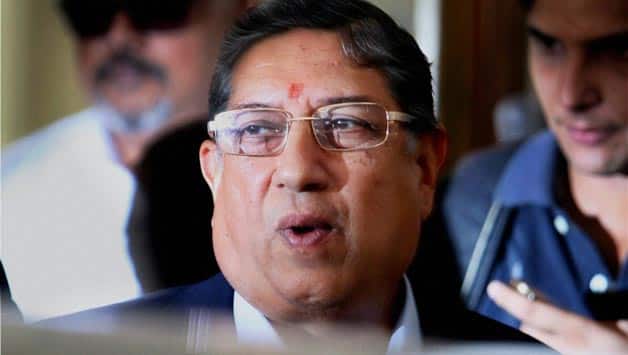 After being allowed by the apex court to take charge as president of BCCI, N Srinivasan is slowly putting the bricks in place to rebuild the fortress he had so passionately worked for © PTI

Having survived potentially the worst possible circumstances as BCCI President, N Srinivasan can only grow stronger from here. It continues to be a sad story for the rest, but Abhijit Banare looks at the situation from the perspective of the main man in the spotlight.

“I am quite happy, BCCI needs somebody.” It appears as if the president’s chair in Board of Control for Cricket in India (BCCI) and N Srinivasan are a married couple. They had their differences, separated for a while and finally couldn’t live without each other and came back to live happily ever after.

After being allowed by the apex court to take charge as president of BCCI, N Srinivasan is slowly putting the bricks in place to rebuild the fortress he had so passionately worked for. The first step was to remove the few rotten apples from the BCCI annual report which makes no mention of spot-fixing and terms the year as a memorable one! It surely takes real guts, sans dignity, to fight out of a situation like this. The President though in a negative sense can be seen as an epitome of survival instinct.

Let’s think from Srinivasan’s perspective: I wake up one morning to see my organisation’s cash-cow stung by some bees, sucking out its credibility. Then, my own son-in-law, whom I knew well — much before his lawyer redefined it — was arrested for involvement in betting. Within hours there are hundred people gunning after me, some of whom were my ‘friends’ who I had lured with a lot of freebies in the hope that they’ll return favour with enthusiasm interest. Yet they tried to bulldoze me. Where do you look for help when your right hand man Rajeev Shukla raises voice against you. Amidst all these I somehow manage to fix set up a probe panel which thankfully clears me up. And during this time I also defended the enthusiastic man my daughter married. With no one in my favour I still get elected unopposed but the food from my plate is stolen. This bloke from Bihar tries to railroad me with a judicial recourse. And after endless petitions, I finally get approval to sit where I really belong to.

Wow! Any normal human being would have crumbled and got dusted with the sequence of events. Maybe that’s why they say, champions do things differently! One of the better decisions Srinivasan took is to stay insulated from the media. When in trouble the last thing you want to do is sit on an interrogation chair at 9pm and face nasty questions from Arnab Goswami! Keeping aside the thought whether a person is guilty or innocent, media debates will always have questions and are least interested in solutions.

Unfortunately for the game of cricket, the big man from Chennai — with multiple ambiguous designations — will only grow powerful. Having survived possibly the worst situation where there was no option but to walk away, he carved out of the cave and the confidence is only going to get reinforced. As discussed in this article, one of the reasons for distancing Gurunath Meiyappan was that, staying as president was more important. It is the only way to navigate the endless troubles that are flooding beneath the chair. Once he steps down he will be further pulled down into the mess. Maybe the rest of the cricket fans, media and experts weren’t sure of this but Srinivasan possibly had charted out the consequences well and so did the eventual course of action.

Having somehow climbed through a suffocating last few months, the last thing the cement-man would have hoped is to be probed by Justice Mukul Mudgal. The eminent legal personality and — an enthusiastic passionate cricket lover — has given enough troubles to the board in the last one decade, ironically starting from the case of fixing itself in 2000. Two out of the three panellists are surely not going to let go off the issue easily and one can just hope Nilay Dutta, the third one, too falls on the same side as the two reputed personalities.

While there are four months to go till another probe report is filed, Srinivasan can heave a huge sigh of relief and continue his recovery. At least now he knows that no one around is trustworthy enough to fight it out along with him (or the other way round as one would prefer). And when the report does come out, the better way out is stay in a powerful position and sail over it. It is unthinkable how the president is going to stay away from the IPL when a franchisee owned by India Cements — of which N Srinivasan is just a director (that’s how he prefers to relate it). But knowing his abilities there will always be a way out to at least attend the auctions. As for matches, it doesn’t matter, he hardly ever attends.

For the rest of us who follow cricket, the issue has become a joke. Sometimes, pressures in life mount to such an extent that instead of fighting it out you give up, start relaxing and stop thinking about it. Perhaps even the members within the BCCI have no option but to stop thinking and stay on the same side of arrogant power. All we can do is: sit back and listen to Ravi Shastri whenever the Men in Blue start playing. In the meanwhile, BCCI needs somebody, let Srinivasan take care of it!