A right-handed top-order batsman, Ojha keeps wickets for his teams and among the fringes in Indian Test team.

Born July 20, 1983, Naman Vinaykumar Ojha is an Indian cricketer who primarily plays for Madhya Pradesh (MP) team in domestic cricket and Sunrisers Hyderabad (SRH) franchise in the Indian Premier League (IPL). A right-handed top-order batsman, Ojha keeps wickets for his teams and is currently second most preferred choice for the keeper s role for Indian Test team behind Wriddhiman Saha. Having made a mark in the shorter formats initially, the biggest break came for him in 2015, when Saha s injury opened doors for him in Indian Test team. On his 34thbirthday, Chinmay Jawalekar digs out 15 lesser-known facts about the cricketer from the holy city.

1. City of temples: Born in the city of temples Ujjain in MP, Ojha grew up in another city from the state Ratlam. It is here that he started learning the game but due to lack of facilities, he had to move to the biggest commercial centre of the state and latest to gain international Test status Indore.

2. CCI: Ojha first came to Indore when he was 14 years old and started playing cricket. Here, while playing at a camp organised by a local bank at Yashwant Club, he was introduced to former First-Class cricketer from MP and one of game s most distinguished administrators, Sanjay Jagdale, by bank representative and one of his early guides, Iyer Sir. Jagdale asked him to join Cricket Club of Indore (CCI) and from there, his association with Jagdale and real journey towards top-class cricket started.

3. Bade Sir : Ojha started playing at CCI under the watchful eyes of Jagdale, who is fondly known as Bade Sir . Jagdale has nurtured many talents for Indian cricket, most notably VVS Laxman, Murali Kartik, Hrishikesh Kanitkar, Sridharan Sriram and Vipin Acharya among others. He has served Indian cricket in various capacities over the years. Ojha groomed and developed his game under Jagdale and became his latest prot g e to play for Team India.

4. Age-group cricket: Ojha rose quickly through the ranks once he started playing A grade cricket. Divisional cricket, Under-19 and playing for MP Ranji team happened soon after.

5. Four-day cricket: He might have established reputation as a shorter-formats specialist, especially at the domestic level, but if you ask his personal choice, Ojha loves to play four-day cricket. Every format has its flavour, but I personally like four-day cricket. Simply because it gives me that extra time to get set in the middle and then play my natural game, Ojha once told in an interview to Sushil Doshi for MP Cricket Association (MPCA).

6. IPL calling: After missing IPL s first season, Ojha was picked by Rajasthan Royals (RR) for the second edition. Success in the limited-overs format in 2008-09 season helped his cause. After being benched for first few matches, Ojha did get to play eight matches after team s poor showing opened doors for new players.

7. Shane Warne s support: Ojha had a poor start to his IPL career as he got out on a duck on his IPL debut against Deccan Chargers (DC) at Port Elizabeth. The next game against Kings XI Punjab (KXIP) was virtually a make or break game for him, as a failure there could have shut the doors for him. He was nervous like any other youngster and on top of it, he was asked to open the innings. His then skipper Shane Warne backed him wholeheartedly and even came to see him off to the ground with words of motivation. Originally supposed to take the non-striker s end, Ojha had a last minute hunch of coming good in the match after seeing that Ramesh Powar was going to open the bowling. He asked his partner, former South African skipper Graeme Smith, to let him take the strike. As it happened, Ojha smashed 51-ball 68 in his team s 78-run win. He rates that knock as his best under pressure.

8. IPL 3 and India debut: After making a mark in IPL 2, Ojha had an even better IPL 3 at home. For the first time, he got to play all the 14 games, where he smashed 377 runs at an average of 31.41 and SR of 132.28. Though he did not start the campaign on a good note, Smith s injury and subsequent ouster from the season and Shane Watson s unavailability earned him the chances he needed and he made the most of it. Immediately after the IPL, when a young Indian team was announced to tour Zimbabwe, Ojha found himself in the squad and earned his ODI and T20I caps.

9. Senior pros mentorship and success Down Under: In 2014, when Ojha toured Australia with India A team, he hit three successive hundreds and finished the four-day leg of the tour with 430 runs in three innings. He was almost unstoppable on the tour and the timing could not have been better as Indian captain MS Dhoni hung his boots from Test cricket later that year. This remarkable turnaround in his game was not an overnight process. Former cricketers Narendra Hirwani and Pravin Amre had a huge role to play in it. Hirwani, who also hails from Indore and has known Ojha for a long time, had suggested him to seek batting coach Amre s help to fix his technical woes after a disastrous outing with India A against New Zealand A in 2012. Ojha worked with Amre on Hirwani s advice and the results were for all to see.

10. Test call-up: His fantastic run Down Under, which included a double century and two hundreds in three innings, earned him his maiden call-up to Indian Test team during India s tour of England as a back-up for keeper Saha, who got injured. However, his actual Test debut came a year later in Sri Lanka, again due to Saha s injury, who by now had become India s No. 1 Test keeper after Dhoni s retirement.

11. Occasional brain-fade: Ojha can be really destructive when he is in flow, like he has showed in the past with his big-hitting abilities. However, one aspect about his game which the experts have often criticised is the occasional brain-fade. At times when he looks well set for a big innings, he produces an inexplicable shot which leads to the fall of his wicket. Even on his Test debut, he got out in similar fashion in both the innings after getting start of 30 and 20 odd runs. But by his own admission, Ojha is working hard to fix this area by improving his patience, technique and concentration.

12. IPL success with Sunrisers Hyderabad: After playing seven seasons of IPL, Ojha finally got to taste success as his side SRH won the ninth season of the mega tournament by beating Royal Challengers Bangalore (RCB) in the final of IPL 2016.

13. India A captain: In mid 2016, Ojha was appointed captain of India A squad, which is scheduled to play Australia A , South Africa A and Cricket Australia’s National Performance Squad in a quadrangular series in Townsville and Mackay in August same year. The tour also comprises two four-day games against Australia A in Brisbane in September.

14. Bollywood plot in his wedding? A hilarious incident, which appears as if coming out straight from a Bollywood potboiler, happened at Ojha s wedding in 2011. Around 25 caterers were abducted from the hotel in Ratlam where his wedding reception was being held. The case was cracked soon and the accused reportedly told police that they had carried out the kidnappings over transactions of money with the caterers and for not letting caterers from Indore work in Ratlam. This anecdote was shared by none other than Virender Sehwag.

15. When not playing: Ojha loves to catch up with friends, watch movies and indulge in a bit of training when he is not playing cricket. 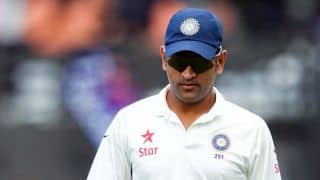