In September, Tony Abbott arrived in India with Adam Gilchrist and Brett Lee.

In the famous sitcom Mind Your Language, expats from all over the globe gathered at a night school to learn English. A Hungarian, a complete novice in the language, joined the class one day, and struggled to communicate with his classmates. The Italian took up the challenge and said, “I’ll speak to him.” Turning to the Hungarian, he said, “Football.” The Hungarian’s eyes lit up and for some time, the duo dished out a list of their favourite footballers — a conversation that ended with a warm handshake. The iconic sitcom had encapsulated the power of sport in that short passage!

Sport transcends national borders and has the power to bring people together. The power of sport cannot be underestimated in international relations. Time and again, sport has been used as a tool to bring two countries closer — even those at odds. In the 1970s, ping-pong diplomacy was instrumental in warming the relations between the United States of America and China. Likewise, cricket has played a crucial part in India-Pakistan relations. Zia-ul-Haq had travelled to India during the Jaipur Test in 1987. Parvez Musharraf had come to Delhi in 2005 during a One-Day International (ODI). And of course the two then-Prime Ministers met during the ICC World Cup 2011 semi-final in Mohali. Sport can invariably be a diplomatic theatre.

While sporting action may play a role in diplomacy at large, world leaders have also recognised the importance of personalities. Back in 2012, Daren Ganga and Brian Lara had come to India with the Trinidad and Tobago Prime Minister. Recently, Prime Ministers of India and Australia, Narendra Modi and Tony Abbott, have taken cricket diplomacy to a new level. Recognising the fact that the two countries share a common passion for the sport, they have done well to use cricket in the backdrop of their political summits. With the upcoming ICC World Cup 2015, this has proven to be a masterstroke. Cricket diplomacy is now more than building bridges with matches in the backdrop or leaders meeting around a game. Cricketing legacy and personalities have a bigger role to play in this regard.

In September, Abbott arrived in India with Adam Gilchrist and Brett Lee, two Australian cricketers who enjoy mass popularity in India. On their first day in the country, they caught up with Sachin Tendulkar in an important function in Mumbai. Later, Abbott flew to Delhi where the two Aussie cricketers met Modi. It was then India’s turn to reciprocate. Kapil Dev, Sunil Gavaskar and VVS Laxman flew to Australia recently with Modi. It was appropriate that they then met at the iconic Melbourne Cricket Ground (MCG). Glenn McGrath, Allan Border, Dean Jones, Michael Kasprowicz and Steve Waugh also joined Abbott in hosting Modi and his cricketers. The picture of them posing with the World Cup Trophy and the Border-Gavaskar Trophy (which is contested between India and Australia) is sure to feature in museums in the future.

With the world becoming increasingly commercial, sport may help bring in a human touch to diplomacy. Modi and Abbott’s moves have only strengthened that belief. It is not only a move to build political friendships, but also to reach the masses, which recognise the contributions of their sporting heroes. Apart from the games on the field of play, such gestures will help diplomatically and ensure countries stay closer and foster lasting ties. Sport also becomes a sort of cultural exchange between the nations.

Of course, such a strategy can be a ‘horses for courses’ move. For instance, if Modi has to fly to a country like Malaysia, he could consider taking along some of the badminton stars such as Pullela Gopichand or a Prakash Padukone, as the sport enjoys popularity in that country. Modi is one Prime Minister who has recognised the impact of sport, not cricket alone. He has communicated his appreciation for victorious athletes very well on social media and that is a reflection of his interest on the field of play. It is likely that he could bring other sports into perspective during future trips.

However, cricketers will play an important role as far as some of the Test-playing nations are concerned. They should figure in Modi’s plans in international diplomacy. 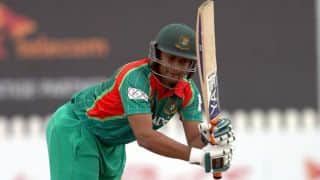