Born on September 12, 1977, Nathan Wade Bracken is a former Australian medium-fast bowler who could swing the ball both ways.

Born on September 12, 1977, Nathan Wade Bracken is a former Australian medium-fast bowler who could swing the ball both ways. Tall and lanky, Bracken suited the Australian One-Day International (ODI) side quite well and remained one of the most important player of the team from 2006-09. On his birthday,Abhishek Kumar lists out 11 important shots about him.

1.  Composed debut in all formats

Bracken represented Australia in all three formats of the game and in all of his debut matches; he was very economical and picked key wickets. Bracken made his ODI debut in January 2001 against West Indies, where he took the only wicket of opener Sherwin Campbell and conceded only 30 runs in his nine over spell with three maidens. Later, after two years in December 2003, he was selected for the longer formats and played his first Test against India and took three wickets in the match and in both the innings, he got the prized scalp of Virender Sehwag.

It was the only T20I match to be played between Australia and South Africa in January 2006, when Bracken made his first appearance in the most famous format of the game and once again Bracken bowled an exceptional spell of four overs in which he took two wickets, giving only nine runs.

2.  Bradman Young Cricketer of the Year

After playing only one match in 1999-00 domestic season, Bracken made a very strong comeback in 2001-01 season by taking 29 wickets at an average of 23.72 and gained the second spot in leading wicket-taker of the year. With this amazing performance in domestic circuit, he was awarded with Bradman Young Cricketer of the Year in 2001.

When Australia met West Indies in the final of 2006 Champions Trophy, Bracken laid the foundation of Australia’s win by taking first three wickets of West Indies. Mainly the match turned towards Australia’s favour when he took his third wicket of the match and that was Chris Gayle, who was going big for every next ball. His six over spell with three wickets and conceding just 22 runs helped the Aussies in getting the Caribbean side all out for 138. Australia won their maiden Champions Trophy quite comfortably.

After winning the Champions Trophy for Australia, Bracken became the leading wicket-taken for the nation in 2006 with 46 wickets in 23 ODIs at an average of 18.82. This was his best record in a calendar year throughout the career.

In 2003 World Cup, Bracken was the part of the side but couldn’t get the chance to play but in 2007 he was a prominent member of the side and bowled exceptionally throughout the tournament. He took 16 wickets in 10 matches in the 2007 World Cup at 16.12.

Bracken’s best ODI figures came against Sri Lanka of five for 47 at Sydney Cricket Ground on February 8, 2008 and continuing the same form towards the end of the year, he climbed to the top of the bowlers’ ranking in ODI. In 2008, Bracken took a total of 31 wickets in 18 matches at an average of 18.16. Not only this, in the same year, he was also named in ICC World ODI XI.

In his eight year career in ODIs, Bracken troubled almost every batsman in the world but especially for Sri Lankan players, he was the nightmare for them. He played total 13 ODIs against Sri Lanka, out of which he took 35 wickets at an average of 12.20.

In 2009, Bracken was seen spreading awareness about the consequences of speeding, which is biggest cause of death and injuries in New South Wales (NSW) along with NSW Centre for Road Safety and Speed Blitz Bluez.

A fast bowler’s life is always full of injuries and same goes with Bracken as well. His last international appearance was in September 2009 against England and later on February 9, 2011 due to a chronic knee injury, Bracken had to retire from all forms of cricket.

After the cricketing career, Bracken was also involved in politics for sometime, where he also contested the Australian House of Representatives for Dobell as an independent candidate at the 2013 federal election and got 8.2% primary vote.

In March, 2015, Bracken sued Cricket Australia for $1 million over his knee injury and claiming that the board failed to investigate, diagnose and treat, which he suffered before an ODI match against England in 2007. But later after two months in May, he settled his case against the board. 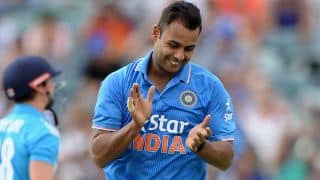