Six sessions have been played so far in the India-Australia fourth Test. Australia won the first and the sixth session, India dominated in the other four. Australia's comeback now ensured the Test hangs in balance.

Six sessions have been played so far in the India-Australia fourth Test at Dharamsala. Australia won the first and the sixth session, India dominated in the other four. Australia’s comeback in the final session of the Day Two has now ensured the Test hangs in balance. Replying Australia’s 300, India are 248 for 6 with Wriddhiman Saha and Ravindra Jadeja at the crease. The spectacular Dharamsala witnessed another gripping day’s contest. Suvajit Mustafi looks at the highlights from the second day’s play. FULL CRICKET SCORECARD: India vs Australia, 4th Test at Dharamsala

The Vijay-Hazlewood tussle: A contest I have keenly looked forward to. Murali Vijay can leave balls around off-stump all day; Josh Hazlewood can bowl in the channel all day. It was always about who blinks first. Hazlewood tested Vijay with some unplayable deliveries. The first ball of the fifth over seemed like a vicious leg-cutter. The ball landed on a crack and deviated away. Earlier, Vijay had gorgeously driven Hazlewood through cover for a boundary. Full Cricket Updates, India vs Australia 2016-17, 4th Test at Dharamsala, Day 2

Hazlewood finally had his man in the 11th over of India’s innings. The constant testing in the channels paid off. The ball slightly deviated away, took Vijay’s edge into Matthew Wade’s gloves. The young Australian bowler did not held himself back, and there followed a mild send-off.

Pujara’s record: Pujara got off the mark with a classy cover drive. When he scored his 11th run, he surpassed Gautam Gambhir’s tally of 1,263 runs in a Test cricket season and set his new record. With 1,316 runs in 2016-17, he is now only behind Ricky Ponting. The former Australian captain had piled up 1,483 runs in 2005-06 season.

Pujara crafted a resolute 151-ball 57. It was bit slow for one’s liking but it also ensured that India had their wickets intact. He went on to add an 87-run stand for the second wicket with KL Rahul.

The consistent Rahul and Cummins’ last laugh: It was not an usual knock from Rahul, who generally scores at a brisk rate. Australians tested him with the short-pitched deliveries. He was dropped off Cummins by Matthew Renshaw at the first slip. Cummins also smacked his fingers that eventually bled but Rahul showed determination.

Rahul slammed his fifth fifty of this series, his fourth on a row to put India in a strong position before throwing it away.

Cummins not only tested Rahul with short-pitched deliveries but also a barrage of verbal volleys. Rahul might have been riled up by them. Post lunch, Rahul perished while attempting a hook from well outside the off-stump. He got the toe-end of the bat and David Warner nabbed on to it at cover. Rahul became the first Indian opener to score five half-centuries in a Test series without a scoring a century.

Rahane’s madness! India’s stand-in skipper Ajinkya Rahane walked out to bat after Rahul fell. He showed urgency to join Rahul in the dressing room. At Ranchi, Rahane was dismissed while trying to play an upper-cut off Cummins. He almost got out the same way, off the same bowler, off the first ball he faced at Dharamsala. He then played a pull for a boundary and got a top edge for six. The early part of Rahane’s stay, especially against Cummins, was shaky.

Pujara sensibly kept his captain off the strike. Rahane later played some attractive strokes before perishing for a chancy 46.

Lyon roars: Perhaps there were early indications. The ball was finding Nathan Lyon throughout the day and the off-spinner made some brilliant stops in the field. However, what is remembered is what he does with the ball. Not 100 per cent fit, Lyon roared big in the final session and claimed four wickets.

He got the breakthrough when he dismissed Pujara bat-pad and Peter Handscomb at short-leg pulled off another blinder.

Karun Nair fell next. Glove, then pad to Wade’s gloves. The following tweet is a serious possibility in Nair’s case.

Andy Sandham (14 Tests) has had the shortest career by anyone with a 300.

I wonder whether anyone will ever break that.#JustSaying #IndvAus

Lyon then removed Rahane before getting better of his counterpart Ravichandran Ashwin to equal his wicket-tally this season.

Now that is some achievement!

Tit-for-tat: Smith was dismissed by Ashwin as the off-spinner came round the wicket and the ball held its line. Smith got an edge to Rahane at first slip. In a similar setting, Lyon, Australia’s off-spinner, came over the wicket and the ball did not spin enough, took Rahane’s edge and flew to Smith at first slip. Yes, both the skippers, who play for the same IPL franchise, fell in similar fashion.

Sir adds some spice: India’s dismal scoring rate received an enormous boost when Ravindra Jadeja walked out towards the end of the day’s play. Jadeja first slammed Steve O’ Keefe over long-on for a six. The following over, Lyon dropped one short and Jadeja pulled it over deep midwicket for another maximum.

Smith was forced to take the second new ball. Jadeja in process brought up his 1,000 runs in Tests. He now has the double of 1,000 runs and 100 wickets. He also became the third cricketer to the 500-run-and-50-wicket club in a season, after Kapil Dev and Mitchell Johnson.

Jadeja is unbeaten on 16 and has task in hand along with Saha.

Renshaw dropped two catches, both off Cummins. Rahul made use of the luck and stroked a 60. Saha was dropped off the first over with the second new ball. Had Renshaw held that, Australia could have feasted on the Indian tail today. 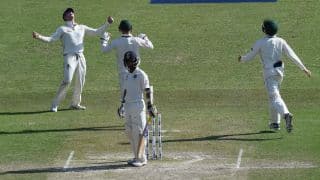