Nawaz Sharif's career was restricted to a solitary First Class match for the Railways team.

At Karachi Gymkhana Ground on December 10, 1973 Nawaz Sharif made his only First-Class appearance. Abhishek Mukherjee looks at the man’s attempt at sport before moving on to bigger things.

Nawaz Sharif also played cricket. A genuine lover of the sport, Sharif was also a decent batsman. As Rameez Raja reminisced at Ceat Cricket Awards 2014: “He played for the same club as I did. I have played a couple of matches with him. He was a fierce cutter of the ball and also played with a straight bat. He really enjoyed his cricket.”

Despite his skills Sharif’s First-Class career lasted a solitary match — for Railways against PIA B at Karachi Gymkhana. Sharif, two weeks short of his 24th birthday, was drafted in to make his debut alongside Zahid Afridi of PIA B.

An opening batsman, Sharif went out to open batting with Zakir Butt (the wicketkeeper) after Arif Butt (not related to Zakir) decided to bat. He could not come to terms against the pace of Fahimuddin Alvi and Shahid Etemad. The opening partnership reached a mere 3 before Etemad had him caught by Qaiser Raza. Sharif had managed a duck.

Zakir batted defiantly for 57. There was some resistance from Mahmood Arshad and Zaheer Ahmed, but it was Mohammad Nazir who stole the show. Walking out at 137 for 5 Nazir scored 67 to life his side to 238. Fahimuddin (4 for 88) and Etemad (3 for 24) did a competent job, but they did not get a lot of support. Day One ended with Railways’ innings.

It was a four-day encounter, but Nazir’s off-breaks decided things on Day Two. Nazir had already made it to the record books when he had claimed 7 for 99 on Test debut against New Zealand at Karachi in 1969-70 (still the best figures by a Pakistan spinner on Test debut, and of all Pakistan bowlers only Mohammad Zahid has bettered him with 7 for 66).

Nazir, still an active Test cricketer, was too good for PIA B, who were once going well at 46 for 1. Then Nazir skittled them out with figures of 7.2-1-10-6. With Nazir Khan also chipping in with two wickets PIA B lost 9 wickets for 5 runs, were bowled out for 51, and had to follow-on.

This time things turned out to be slightly better. Rehman Ali scored 43, there was support from Khalid Alvi, but the only improvement was the fact that there was no collapse. There was no partnership in excess of 30, and PIA B were bowled out for 119 and lost by an innings. Once again Nazir was the wrecker-in-chief with 5 for 60, though Ahad Khan removed three batsmen as well.

Poor Sharif did not get a second chance to bat. He never got to play another match, and could thus never score a First-Class run. However, he more than made up for that, thanks to his illustrious political career.

– Sharif was dropped from the side subsequently. Railways went on to win the tournament that season, defeating Pakistan Universities in the semifinal and PIA A in the final.

– Sharif played several other matches, though only one of them has a recorded scorecard. When England played a 16-men Lahore Gymkhana (which included Bill Athey, Paul Jarvis, and Eddie Hemmings from the English side) as a warm-up match for the 1987 World Cup, Sharif turned out for the latter. England scored 261 for 3 before restricting the hosts to 132 for 6. Opening batting Sharif had scored a single before he was bowled by Phil DeFreitas — a fate that Sunil Gavaskar, no less, had to face in the World Cup semifinal shortly afterwards.

– Surprisingly, in another warm-up match — this time for Punjab Chief Minister’s XI — Sharif (who was the Chief Minister of Punjab from 1985 to 1990) ruled himself captain out of the blue and walked out to open with Mudassar Nazar. Imran Khan later wrote in Pakistan: A Personal History: “Nazar wore batting pads, a thigh pad, chest pad, an arm guard, a helmet and reinforced batting gloves, while Sharif simply had his batting pads, a floppy hat — and a smile.”

There are two different viewpoints on how many balls Sharif survived during that innings. Imran wrote: “As we watched the ball — by a 6’6″ West Indian fast bowler — hit the wicketkeeper’s gloves even before Sharif could lift his bat, the team sighed with relief that it wasn’t straight. Mercifully for Sharif, the second ball was straight at the stumps, and before he could move, his stumps lay shattered.”

Rameez had a slightly different take: “Imran Khan went up to the West Indies bowlers and asked them to take it easy against the ‘amateur’. It was Patrick Patterson or Courtney Walsh who said, ‘Don’t worry’. The first five balls to Sharif were bouncers. His middle stump went cart-wheeling off the sixth.”

Though the versions differed on the proceedings, there was no doubt regarding the end result. 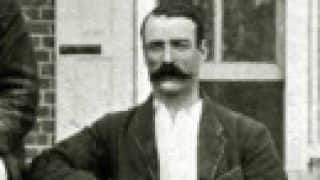 Ernie Jones: The man who sent a ball through the beard of WG Grace 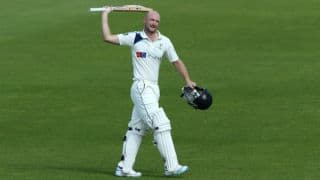