Born July 15, 1984, Nawroz Mangal has led Afghanistan with runs at the top of the order, and with distinct leadership.

Born July 15, 1984, Nawroz Mangal has led Afghanistan with runs at the top of the order, and with distinct leadership. Abhishek Mukherjee attempts to observe the tangible from his disposition.

When Afghanistan take the field, they conjure some interest due to the expressive brand of cricket they play. As they become more established in the consciousness of global cricket consumers owing to more coverage on television, Afghanistan’s flavour becomes more concrete. But Nawroz Mangal, their former captain, who led the team for least three years, and a perennial figure in their cricket since the early 2000s, typifies Afghanistan in a distinct fashion: in resilience. He seems to have the qualities of a leader, of maturity in demeanour and perspective, quite aside from the tactical brain exercised on the pitch (which, to me, is only one half of the job), in sufficient quantities. ALSO READ: Afghanistan in ICC Cricket World Cup 2015: Marks out of 10

This is exemplified in noting Mangal’s thinking in the documentary, ‘Out of the Ashes’. He asked his teammates to reflect on where they started their cricketing steps from, whenever they would step on to the field, so it could keep them grounded. Mangal speaks about the toughness of Afghanistan people, seen in not allowing any foreign ruler to rule over them at any point in their history. On an occasion, Mangal reprimanded a teammate in the dressing room when he fussed about an umpiring decision (they were playing in an ICC tournament) in a dignified, quiet manner.

This solidity is to be expected from a man who oversaw his country’s rise effectively from scratch, for something of that quality had to be conjured to tie over uncertainties and difficulties they faced. But it is an acquired being, something he has had to shape away from his refugee school, where Mangal studied only till Class 8. Perhaps that inspiration arrived from observing the class of Sachin Tendulkar, who he idolised against the wishes of people around him in the refugee camp. Mangal speaks in a deep, clear tone, in his own language, in such a respectable manner that it had a scribe not familiar with the layer’s native tongue finding profoundness in his expressions.

But a player’s value is more than only his discernible presence. Mangal has also served as one of Afghanistan’s most dependable batsmen in their short history. Amid the habitual falling of wickets around him, as if the players oscillated between the state of catatonia or its opposite, he would provide resistance with his refusal to ‘gift’ his wicket away. In the present limited-overs side, only Samiullah Shenwari has a better One-Day International (ODI) average than him — 37.41 to Mangal’s 32.36 —and Mohammad Shahzad, the portly top-order batsman, has a better 100s count — 3 to Mangal’s 2. Mangal is more staid than either of them, a trait that is of value in some circumstances and playing conditions.

In the ICC Cricket World Cup 2015 this year, in all his outings, against bowling attacks far more potent than he must have been used to facing regularly, Mangal got out after a period of resistance. Mangal faced, on an average, 34 balls in every match in the tournament, refusing to succumb unless forced to. His most attacking innings arrived against Australia, a stroke-filled 33 (off 35 balls) that contained two handsome sixes off Mitchell Marsh. But Mangal’s knock against India in the warm-up game showcased his capabilities. Mangal late-cut, played the lap sweep, cover rove fiercely and hit big sixes in his 60. The first of his 2 centuries, against Scotland in Sharjah, took his team to a commanding win in the ICC World Cricket League Championship, a tournament via which Afghanistan qualified for the World Cup.

Mangal hasn’t been quite as successful in the Twenty20 format. His strike-rate of 105 in Twenty20 Internationals (T20Is) and 112 in T20s suggests he is not suited to the format. He is having a mediocre ongoing ICC World T20 Qualifier 2015, with scores of 16 not out, 29, 15 and 0. And this is a format which will feature Associate nations on the television more than other.

But nevertheless, at 30, Mangal has already helped carve out a piece of history for himself and his team. As he himself said to the media, “I will never disappoint my people for want of trying”. For what he has created, his story, not detachable whatsoever from the romance of Afghanistan cricket, is significant. 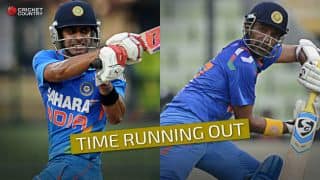