The obdurate Nazar Mohammad was born March 5, 1921. Abhishek Mukherjee looks at the man who faced the first ball and scored the first hundred for Pakistan in Tests.

Nazar Mohammad was for Pakistan approximately what Charles Bannerman was for Australia (and for the world): he faced the first ball for them, he scored the first hundred for them, played a significant role in their first Test victory, he was the first man to carry bat through an innings for them, and more.

He was one of those obdurate batsmen the bowlers would hate bowling to: he played 5 Tests, all against India during Pakistan’s maiden Test series; he opened batting with Hanif Mohammad in every Test, and throughout the series the pair was involved in a serious example what Ramachandra Guha had referred to as tuk-tuk (block-block) in an article on Rediff.

He was also a spectacular ground fielder — to the extent that he earned the moniker Prince of Gully from Indian commentators on his first tour. He also bowled a mixed bag of medium-pace and leg-breaks.

Born in Lahore in undivided India, Nazar was the youngest of five brothers. He was registered Mohammad Nazir at birth. He took to cricket after his elder brothers Sharif and Sultan. Sharif Mohammad had had represented Northern India in Ranji Trophy, and had a batting average of 39.50; Sharif’s son Azmat Hussain played for Lahore Greens as well.

The name ‘Nazar’ was acquired somehow during his playing days at Minto Park. His performances for Mandot CC made him a celebrity of sorts in Lahore club circuit. However, he first grabbed attention with 217 for Islamia High School, Bhaati Gate against the Sheranwala Gate branch of the same school. He later went to Islamia College.

Nazar followed his brother’s footsteps into the Northern India side. On First-Class debut in a Ranji Trophy match against North-West Frontier Province (NWFP), Nazar scored 0 and 21; he also scored 43 and 1 on his Bombay Pentangular debut against The Rest.

Thanks to the structure of Indian domestic cricket, Nazar played only 3 First-Class matches that season; he started the next season on a bang, scoring a career-best 175 at Lahore. He added 273 with Jagdish Lal for the opening stand in 207 minutes; they had already outscored NWFP by then, who later crashed to 90 and 118 in the match.

He kept on scoring runs, but was somewhat drowned in the Vijay Merchant-Vijay Hazare run-fest during the War years. The Pentangular semi-final against The Rest was a perfect example: he scored 154 and guided the Muslims to 353, only to be out-batted by Hazare, who scored an emphatic 248 and helped The Rest to a 42-run lead.

Subsequent to the Indian Independence, Nazar moved to Pakistan, when West Indies toured India in 1948-49 they made a detour of Pakistan, where Nazar scored 87 against John Trim, Gerry Gomez, and John Goddard, adding 148 with Imtiaz Ahmed. Touring Ceylon later that season he scored 170, adding 269 with Murawwat Hussain.

Nazar kept on scoring runs consistently and finished 1951-52 with four 427 runs at 61.00 scoring two hundreds in 1951-52; when MCC toured Pakistan that season (when they toured India) he scored 140 and 66 against them in back-to-back matches against Brian Statham, Derek Shackleton, Donald Carr, and Roy Tattersall; he was an automatic choice for Pakistan’s tour of India, East Pakistan, and Burma next season.

The tour started with Punjab — the state Lahore used to belong to in the pre-Independence era. The Pakistanis received a warm welcome; for some it was homecoming. They had a decent start to their tour in the match against North Zone at Amritsar; though Nazar managed only 4 and 33, young Hanif (then a wicketkeeper of 17) impressed everyone with 121 and 109*. By the time the first Test started, the experience of Nazar and the talent of Hanif made them the most obvious choice as the opening partnership.

Lala Amarnath won the toss in the first Test at Kotla; India put up 372, thanks to a 109-run last wicket stand between Hemu Adhikari and Ghulam Ahmed. Nazar and Hanif started well (as mentioned, Nazar faced the first ball for Pakistan), adding 64 before Nazar was run out for 27. Then Vinoo Mankad cast a web on the tourists, taking them out one by one and finishing with figures of 47-27-52-8; the last wicket fell at 150, and Amarnath enforced the follow-on.

The second innings was not much of an improvement; Amarnath removed Hanif early, and Nazar was bowled by Mankad for 7; Mankad picked up 5 more wickets while Ghulam had four, and Pakistan ended up losing by an innings and 70 runs.

The jute-matting wicket at Lucknow suited the tourists more; Fazal Mahmood and Mahmood Hussain, their medium-paced champions, bowled out India for 106 with Fazal taking 5 wickets (the first time a Pakistani did so) and Hussain 3. It was then that Nazar began his epic: he batted for 515 minutes (no less), carrying his bat for a seemingly marathon 124. It was the first Test hundred by a Pakistani. Nazar also became the first Pakistani to carry his bat in an innings.

Maqsood Ahmed, with 41, came the closest to Nazar’s score, but the Indians felt Mankad’s absence badly. The medium-paced attack comprising of Amarnath, Shah Nyalchand, Hiralal Gaekwad, and Gul Mohammad were hardly competent against Nazar’s obstinate existence; he had, after all, mastered the art of batting on matting wickets.

Trailing by 225, India capitulated against Fazal for 182; the champion bowler claimed seven for 42 and returned a match haul of 12 for 94 (the first ten-wicket haul by a Pakistani). The Pakistanis had managed a victory in only their second Test appearance. In the process Nazar become the first cricketer to stay on the ground throughout a Test.

The Pakistanis were further boosted when they scored 517 for 4 in the tour match against Bombay (Nazar got 61). However, Mankad was back at Brabourne Stadium and was back to his old self, routing Pakistan with match figures of 8 for 124. Hazare and Polly Umrigar scored hundreds, Pakistan scored 186 and 242 (Nazar managed 4 and 0, and India went up 2-1 with a ten-wicket victory.

The fourth Test at Chepauk was a drawn affair where Pakistan scored 344 (Nazar was run out for 13) and India responded with 175 for 6 before rain washed out the rest of the Test. In the tour match against South Zone that followed at Hyderabad, Nazar scored 156, adding 248 with Hanif for the opening stand.

Nazar got his form back in the final Test at Eden Gardens, scoring 55 and adding 94 for the opening stand with Hanif. Despite the excellent start Pakistan were bowled out for 257 and thanks to Deepak Shodhan’s debut ton India acquired a 140-run lead (they were 179 for 6 at one time).

Pakistan lost Hanif early, but Nazar hung on in a partnership with Waqar Hasan; they pair added 78 for the second wicket, keeping Mankad and Ghulam at bay, before Nazar was finally trapped leg-before by Mankad for 47. Mankad and Ghulam then ran through the middle-order and were soon reduced to 152 for 6.

Thankfully, Waqar (with his 315-ball 97) and Fazal saved the day for Pakistan, and despite marathon efforts from Mankad and Ghulam Pakistan were saved; after Abdul Hafeez Kardar made a token declaration, Nazar opened bowling with Anwar Hussain as India played out a draw.

Nazar scored another hundred in the following match — this time an aggressive one against East Zone: the Pakistanis were reduced to 27 for 2 before Nazar (123) and Imtiaz (103) added 149 for the second wicket. Nazar finished that season on a high note, scoring 687 at 45.80 with 3 hundreds. Unfortunately, he never played First-Class cricket again. Though he scored 110 and 32 (opening with Hanif) for Pakistan Eaglets against Azam Khan’s XI later that season at Lahore, the match was never given First-Class status.

While writing about Nazar, Wisden mentions: “a domestic accident damaged his arm and ended his career.” However, if we go by Pride and Passion: An Exhilarating Half Century of Cricket in Pakistan by Omar Noman, Nazar was involved in a relationship with the legendary actor and singer Noor Jehan, who had by then settled down in Karachi and had acted in Chan wey and Dopatta, both of which were commercial successes.

Nazar and Noor Jehan were, “as the story goes”, in a hotel room when her husband Shaukat Hussain Rizvi, to quote Guha, “walked in with a shotgun”. Nazar jumped out of the window of the hotel room, resulting in multiple fractures of his arm, thereby ending his career. Rizvi and Noor Jehan were divorced later that year (it was also the year in which her magnum opus Anarkali had released).

Nazar later went on to become the National Coach and a National Selector in Pakistan cricket; as Wisden had mentioned, he was also “one of Pakistan’s best cricketing raconteurs”. His son Mubashir played First-Class cricket for Income Tax Department and Lahore B, but it was his other son Mudassar who went on to become the finest cricket of the family.

Mudassar Nazar’s batting style was very similar to his father’s; Guha had mentioned Amarnath, who had fielded throughout Nazar’s 124 not out, erroneously referring to Mudassar as “Nazar Mohammad” on All India Radio on one occasion. Mudassar followed his father’s steps, carrying his bat through an innings (a 495-minute 152 against India at Gaddafi); the Nazars thus became the only father-son pair to carry their bats through completed Test innings.

Nazar Mohammad passed away on July 12, 1996 at an age of 75 years 129 days. When Pakistan Cricket Board honoured the members of Pakistan’s first Test side, Nazar’s family received the posthumous medallion, a 250,000 rupees cash prize, and the green Pakistan blazer of the contemporary team on his behalf. 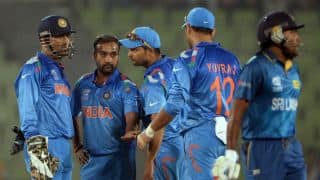 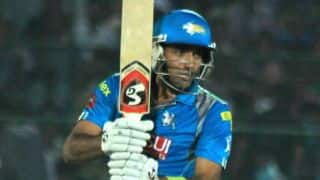