Nazir Ali was the younger brother of Wazir Ali.

September 6, 1930. Bill Woodfull’s Australians regained The Ashes, thanks to some outstanding bowling by Clarrie Grimmett and the small matter of a youngster called Don Bradman. In their last match in London, however, Bradman was dismissed by an Indian for the first time in his career. Abhishek Mukherjee looks at Nazir Ali’s day of glory under the Sun.

Mentions of Nazir Ali will probably lead to blank faces among current fans of cricket. Even if one has heard his name, it is probably because he was the younger brother of the famous Wazir Ali, the more famous of the two brothers from Jullundur. While Wazir’s stature cannot be questioned (he captained Muslims in the Pentangular, and even the Indians in two unofficial ‘Tests’ against the Australians of 1935-36), Nazir had carved out a niche of her own.

Their numbers were comparable. While Wazir averaged 38 with the bat and 31 with the ball, the corresponding numbers for Nazir read 30 and 25. Nazir an aggressive batsman, bowled fast-medium, and was an outstanding fielder. Both brothers featured in India’s first Test against England — at Lord’s in 1932; Nazir had an excellent season, with 1,020 runs at 32 and 23 wickets at 22.

Before all that happened, Nazir had played for Sussex, and later for London University. He won the Club Cricket Conference Cup in 1929. On a tour to Ireland, he scythed through the hosts at Dublin with 7 for 34 and 4 for 53. For Indian Gymkhana against MCC at Lord’s he scored 113 not out and claimed 2 for 68.

However, this was no club cricket: Bill Woodfull and his men were keen to avenge the 1-4 defeat at home. They lost at Trent Bridge but came back strongly at Lord’s. The next two Tests, at Headingley and Old Trafford were lost — before the Australians regained the urn with an innings victory at The Oval.

Starring in the series were Bill Ponsford, Alan Kippax, Alan Fairfax, and Woodfull himself, all of whom crossed 300 at averages of fifty or more. Clarrie Grimmett returned a haul of 29 wickets, and was ably supported by Tim Wall, Percy Hornibrook, and Fairfax.

By the time the Australians reached the fag end of the tour, Bradman was a household name in every household where the word ‘cricket’ meant anything beyond an insect of the Gryllidae family. His was the most prized scalp of all. Bowlers who managed to dismiss him were revered.

The two-day match against Club Cricket Conference was not given First-Class status, it was hosted at Lord’s. The tourists rested Grimmett, Wall, Vic Richardson, and Archie Jackson, but, perhaps giving in to the demands of the local crowd, retained Bradman.

The teams came to an agreement following the Australians’ request: larger stumps would be used for the encounter. Exactly why this was done remains unclear. Neither Irving Rosenwater (in Sir Donald Bradman — a Biography) nor Marc Fiddian (in Ponsford and Woodfull: A Premier Partnership) mentioned anything related to this.

As for the locals, there were three men in the side who would never play First-Class cricket, and five more who played less than 10. Tom Smith would play 25, which left Tom Pearce as the only one with some repute in the side. Pearce went on to play 250 First-Class matches and led Essex for 11 seasons on either side of World War II. There was also Nazir Ali.

Woodfull decided to bat but held himself back, sending in Ponsford and Fairfax. Smith had Ponsford caught by Gerald Summers at short-leg without a run on the board, and was supported ably by William Brindley. However, Ponsford’s dismissal also meant Bradman’s arrival at the crease.

The most prized wicket of them all

Bradman survived a scare early in his innings. He hit a boundary off the first ball he faced, but earned a reprieve shortly afterwards. “He should have been dismissed, Nazir Ali failing to hold an easy catch at short square-leg” (The Sydney Morning Herald) Fairfax was also dropped at slip. The situation looked bleak.

Then Bradman opened up, leaving Fairfax behind. He slammed 70 in 75 minutes with five fours in a 96-run second wicket stand. Then Nazir Ali claimed the most prized scalp of them all: Bradman played one to one FE Whitehead, who did not grass it.

Nazir Ali created history (did he know about this?) by dismissing the most coveted wicket in history. Bradman never toured India, and did not play them before 1947-48. But here was Nazir Ali, the first Indian to dismiss Bradman.

Brindley struck soon, clean bowling Fairfax and Stan McCabe in the same over. However, as The Sydney Morning Herald would write, “the larger wickets the Australians used for the first time were not responsible for either dismissal.”

Brindley was no stranger to the Australian side. Posted in Ceylon, twice did Brindley play against the touring Australians when they stopped in transit. He removed Herbie Collins and Johnny Taylor in 1925-26 but did not get a wicket four years down the line.

Ted a’Beckett was bowled by Smith soon afterwards, and the score read 140 for 5. Kippax (68) and Woodfull (60) helped stage a revival before Smith provided an excellent spell of 2-2-0-3: he dismissed Kippax, Bert Oldfield, and Alec Hurwood, all bowled. “The result would have been the same with smaller stumps,” commented The Sydney Morning Herald.

The end came swiftly. The Australians lost their last five wickets for 33 and were bowled out for 278. Though Brindley (5 for 71) and Smith (4 for 70) were the wreckers-in-chief, Nazir Ali left ground with the most prized possession of all.

The hosts batted for half an hour that evening. Fairfax bowled both openers, leaving them reeling at 13 for 2. Summers (53) and Brindley (34) batted resolutely, adding 78 for the fourth wicket, but they lost 7 for 28 and were bowled out for 133. After Fairfax did the initial damage (he finished with 4 for 41), Hurwood (5 for 14) hurried the end with his off-breaks. Nazir Ali scored 14.

Woodfull enforced the follow-on. This time only three men reached double-figures as the hosts, fighting at 86 for 4, were bowled out for 104. Hornibrook (4 for 37) led the rout this time, while a’Beckett finished things off with ridiculous figures of 4.5-4-1-3. Nazir Ali followed his first-innings 14 with 24 not out.

– The Scarborough Festival match, traditionally the last match of the tour, ended in a draw. Bradman was bowled by Charlie Parker for 96.

– Nazir Ali would play two Tests. His batting never came off, but he did a wonderful job in his next Test at Madras against England. The tourists declared on 261 for 7. Nazir Ali’s figures read 4 for 83.

– By the time the Australians halted in Ceylon in 1934, Brindley was the local captain. He did not bowl. 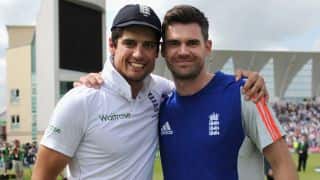