England have just about started peaking, but they are doing so just about the right time.

As England prepare for The Ashes 2015 under a new coach, they certainly look like a stronger unit across formats than they did a couple of months ago. Pramod Ananth believes that this ‘New England’ team will only grow from strength to strength.

The Ashes 2015 is just around the corner and both England and Australia will leave no stone unturned to win it. Australia have been at their dominant best throughout the summer. After winning ICC Cricket World Cup 2015, they dominated the West Indies in the Caribbean. With clinical performances in their warm-up matches in England, they look set to retain the urn. Shane Watson faces tough challenge to maintain position

England have just about started peaking, but they are doing so just about the right time. They have redeemed themselves after going through one of their worst slumps. The selectors’ decision to axe Alastair Cook ahead of the ICC Cricket World Cup 2015 surely backfired in the tournament as England managed to beat just Afghanistan and Scotland. But the team seems to have responded well to their new skipper Eoin Morgan post the mega event as they played excellent cricket to beat the Word Cup finalists 3-2 in a five-match One-Day International (ODI) series at home.

Morgan’s form to has taken a turn for the better ever since the World Cup with three half-centuries and one century from five innings depicting his upward spiral. With their skipper firing all cylinders, the team have rallied around him and backed his efforts with some valiant performances as well. The likes of Joe Root and Jos Buttler have scored heavily in the recent past. The inclusion of leg-spinner Adil Rashid has proved to be a masterstroke, for his skills with both bat and ball could eventually make the difference between his side winning and losing. Ashes 2015 without sledging will lack flavour

Like England’s new ODI captain, their Test skipper Cook too has had a good run of form of late. That seems to be rubbing off on his teammates as well. Cook did well extremely well in the three-Test series at the Caribbean and carried his form on to the home series against New Zealand. His 162 in the first Test at Lord’s not only won the match for England, it also proved that Cook can still play the long innings when needed, just like he did earlier in his career.

Everything seems to have fallen in place perfectly for England in the longest format. Their once-superstar Ben Stokes has rediscovered himself. He batted beautifully in both the innings at Lord’s against New Zealand, playing fantastic counter-attacking cricket when his team were in a spot of bother. Mark Wood, fast bowler from Durham, toiled hard in his maiden series, but his patience and persistence fetched him nine wickets in two Tests. He has a comparatively short run up compared to other quickies, but certainly does not lack the pace. Opener Adam Lyth too scored a century in just his second Test, adding to the pleasant selection woes. Shaun Marsh unequipped to handle swinging ball; could get exposed during Ashes 2015

With veterans James Anderson and Stuart Broad still going strong, one cannot help but adore the talent and depth England have in their side. With Liam Plunkett and Tim Bresnan waiting in the sidelines for opportunities, England don not seem to have to worry about the availability of quality fast bowlers for some time.

There have been chorus of ‘New England’ in many sections of the media recently. This England side courtesy of their performances have proved that they can play fearless cricket and be successful at it too. England have made their intentions clear —they want to be a team which the world takes seriously. They were nothing short of a laughing stock in the days leading up to the World Cup and even during the event. However, on current form, they are certainly a team to be reckoned with and it is something that they can certainly carry into the series to follow, starting with The Ashes 2015. Australia will need Mitchells to fire to retain urn in England after 14 years

England may have lost a few battles over the last couple of years, but they certainly look set to win the war that lies ahead! 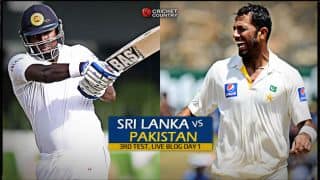