Revisiting the most enticing New Year's Tests at the Sydeny Cricket Ground.

After playing the ‘Boxing Day’ Test at Melbourne Cricket Ground (MCG), the visitors always lock horns with the home team at the Sydney Cricket Ground (SCG) after the New Year. The New Year’s Test match is played on January first, second, or third.

The SCG, situated in the city’s east at Moore Park, is soaked in rich history and tradition. The wonderful game of cricket has been played at the ground for around 150 years now. The SCG has been graced by many twinkling starts of cricket and has had its fair share of thrills and spills over the years, in terms of excitement.

Now, let us look at those roller-coaster gripping Tests that made for an enthralling spectacle for spectators to watch the game.

It was a Test that saw the Wizard of OZ, Shane Warne take 12 wickets in the match. Yet, in what turned out to be a see-saw battle, South Africa scraped home by a mere 5 runs. South African captain Kepler Wessles won the toss and elected to bat. Australia gave Glenn McGrath his first Test cap, and he looked set to be given a long rope by the Australian setup.

At 110 for two with Gary Kirsten and Hanise Cronje at the crease, South Africa seemed to giving Australia a run for their money. However, after Craig McDermott removed his bunny, Kirsten by shattering his stumps, it turned out to be a procession of batsmen walking back to the pavilion to Warne’s deadly flippers. He also turned one of his leg-spinners a mile to clatter the stumps of Pat Symcox behind his legs.

Australia’s score of 292 was largely built on Michael Slater‘s enterprising knock of 92. Allan Border and Damien Martyn essayed useful innings too. Border though, had to wear stitches after a top edge from his willow off Symcox’s bowling saw him being hit flush on his face.

On a tricky wicket, South Africa again found themselves in trouble in the second innings. Despite a broken finger, Wessels made his way into the middle, but couldn’t last long. It was the ever-enthusiastic Jonty Rhodes who shepherded the tail to take South Africa past 200. His last wicket partnership of 36 runs with Allan Donald in the end, proved to be the telling difference between both sides.

Yet, chasing a paltry total of 117, Australia were expected to coast home to victory. At one for 51 with David Boon and Mark Taylor at the crease, they looked well on course. Both were batting at a snail’s pace, but not with too many alarms on the way. It was Boon’s wicket that the eventual hero of the match Fanie De Villiers snared, which led to Australia’s mind numbing collapse. He then proceeded to send back both the night-watchman Tim May and Taylor to create some wobbles in the Australian dressing room. On the final day, the stand-in captain, Cronje marshalled his troops with gusto. When Donald, with a searing toe-crusher, removed Mark Waugh from the crease, South Africa had more than a sniffing chance of a win. Cronje then with a brilliant direct hit dismissed Warne.

McDermott, who was in the thick of the things when Australia lost by a solitary run against West Indies in 1992-93 at Adelaide was involved in the hot cauldron of tensions against South Africa. It was McDermott who played some fearless shots, while the batsman at the other end, Martyn seemed to be suffering from a bout of yips. With six runs away from a nerve-wrecking win though, Martyn after struggling to even score a run for a long time got caught in the covers. His 106-minute agonising stay the crease came to a sorry end. Soon McGrath was caught and bowled by the man of the moment, De Villiers and there was unfettered celebrations in the South African camp. McDermott yet again found himself on the losing side.

England came to Sydney to play the third Ashes Test in 1995 knowing fully that it was a must win game after being bulldozed during the first two Tests of the series.

In game that was played under overcast conditions and constant threat of incessant rain, England ruled the roost for most part of the match, before Australia’s spin twins Tim May and Warne took them to safety.

At 20 for three on the first day, it didn’t look like England were going to dominate the Test match. But a slice of luck that saw England captain Michael Atherton being given not out, despite seeming to be plumb in front, gave the much needed lift.

Just when Atherton and his partner in crime, Crawley seemed to have resurrected the innings, there was that customary England collapse. However, the ever-smiling Darren Gough pulled and played a few hoicks against quickies and the rabbit with the willow Devon Malcolm made Warne scratch his heads by plonking him for a few boundaries.

After a heavy downpour, Australian batsmen played in ideal seaming conditions and they were blown away by Gough. Only Taylor stood there like a rock and Gough took six wickets. In the second innings though, England’s rather go slow approach surprised everyone. Finally, Atherton controversially declared the innings with Graeme Hick remaining not out on 98.

There was another twist in the tale when Australia went hammer and tongs at English bowling and at none for 208, they seemed to going for an unlikely win, while chasing a target of 449. But Angus Fraser ran through Australia’s middle-order to leave them tottering at 292 for seven. With bad light coming into play though Atherton had to use spinners and May and Warne survived the testing last session to eschew a draw. England could have still won it, if Graham Gooch had taken the chance offered by May, but he dropped a sitter. So, the draw meant that Australia retained the Ashes series.

When India toured Australia in 2003-04 not many had given them a chance. However, by the time the last Test was played, the series was level at 1-1. There were still question marks lingering over the batting legend Sachin Tendulkar, as he had failed to make a mark in the previous Tests. He was regularly getting caught in the crease and his incisive footwork came to the fore when he edged one off Andy Bichel’s deliveries at Adelaide behind the wickets to get out.

On a flat deck at Sydney, India won the toss and proceeded to amass a monstrous score of 705. Tendulkar himself gave a fitting riposte to his detractors by essaying a double ton. The feature of his innings was that he didn’t play a single shot through the covers. He waited, waited and waited for Australian pacers to bowl on his legs to play shots through the on side. Just for the sheer zen-masterly concentration prowess and adhesion, it was a great knock. But it was VVS Laxman who painted the ground by combining geometric precision and insouciance from his magical willow.

At 350 for seven, Australia was in a spot of bother, before Simon Katich and Jason Gillespie waded off the threat coming from Indian spinner, Anil Kumble. India didn’t enforce the follow on and made 211 for two in the second innings.

The final innings of the Test was also the final innings of Steve Waugh‘s career. For one final time in his Test career, he launched a rescue mission to take Australia to safety. But if Parthiv Patel the wicketkeeper, had taken some of the chances offered to him, India could have still won the game. The match ended in a draw with Steve Waugh getting a rousing reception in his last Test.

It was arguably the most controversial Test match ever played in the history of Test cricket. From bad umpiring decisions to Harbhajan Singh-Andrew Symonds monkey-gate affair and some inspiring performances, it had everything.

The errors started coming when Ricky Ponting was given not out by Mark Benson although he had edged one down the leg-side. India got a lucky breakthrough in their favour when Ponting despite edging a delivery from Harbhajan was adjudged out lbw. After that it was the turn of Steve Bucknor to give a slew of horrific decisions that went against India. Symonds should have been given out caught behind of Ishant Sharma’s bowling, but only the umpire didn’t seem to hear the thick edge. It was followed by Bruce Oxenford, the third umpire adjudging Symonds not out when he was stumped.

In between, there was some great cricket played by Symonds, but undoubtedly he has to thank his stars for his luck. With the wicket flattening out, Laxman and Tendulkar took India past Australia’s score of 463. What incensed India even more was in the second innings when despite edging it to the slip fielder Rahul Dravid, Michael Clarke didn’t walk! He had to be given out.

On the final day, Sourav Ganguly was given out when for a moment it looked like Clarke had taken the catch on the first bounce. But there was a pact before the series, where both captains had decided to take the fielder’s word. The final nail in the Indian team’s coffin came from Clarke who produced a three-wicket burst to clean up the lower order and Australia won the Test.

Off the field, Harbhajan was accused of racially abusing Symonds by calling him monkey. The match referee Mike Procter suspended him for three Tests at that time before the decision was reversed. All the controversies meant that the great cricket played by both teams took a backseat.

After an explosive start by pacer Mohammad Sami, followed by Mohammad Asif tempting and teasing Australian batsmen to their doomsday, Pakistan was expected to win the Test. But you expect the unpredictable Pakistan team to do something silly and that is what they did and eventually lost the Test by 36 runs.

At two for 205 in reply to Australia’s meagre first innings total of 116, Pakistan had all but sewn up the match. But, first they suffered a typical collapse to be cleaned up for 333 and then the wicketkeeper, Kamran Akmal dropped chance after chance, Michael Hussey played a wondrous knock, before Pakistan exploded in the second innings to gift Australia a victory. To drop four catches in an single innings like Akmal did is unbelievable. It still shouldn’t take anything away from Hussey’s Houdini act and his monumental 95-run partnership with Peter Siddle.

Such was Akmal’s incompetence that there is still a suspicion that something fishy might have happened during the match. 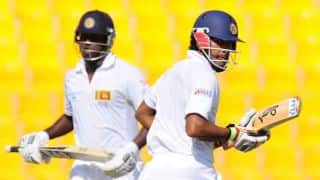