New Zealand will commence their international summer of cricket with a Test match against Sri Lanka at University Oval, Dunedin on Thursday. New Zealand have not had a very good Test tour of Australia and will be hoping to set things right on track when they face a relatively weaker Sri Lankan side in home conditions. New Zealand will definitely have it easier against Sri Lanka who are coming off the back of two home series defeats to Pakistan and India before beating the abysmal West Indies. Rishad D’Souza takes an estimated guess at New Zealand’s likely XI for the first Test. Live Cricket Score: New Zealand vs Sri Lanka 2015-16, 1st Test at Dunedin

Top Order: Martin Guptill has been in horrible form at the top of the order and has never quite looked to seal his spot in that position in Test whites ever since he played his first Test in 2009. However, New Zealand are set to give him yet another chance to redeem himself. He has had limited opportunities in home conditions of late and this could be an attempt to help him find his comfort zone under the familiarity of home conditions.  This could well be his final chance in white clothing. His partner Tom Latham however is earmarked for great success in the opening spot, having done well in varying conditions of West Indies, Australia and England. He is a solid opening batsmen with age on his side. All he lacks is the patience to convert sizable starts to run-windfalls but that promises to come in time. Kane Williamson, in the past three yours, has emerged as the most prolific Kiwi batsman and is widely labeled as one of the best batsman globally. His position at No. 3 is unthreatened. He did well in Australia scoring two centuries from three Test matches. READ: New Zealand vs Sri Lanka 2015 Test series rocked by Kusal Perera’s shock suspension

Middle Order:  Ross Taylor had a funny tour in Australia. He had one gigantic, record breaking knock of 290 at Perth with the exception of which he looked like a fish out of water in the remainder of his innings. Yet, he has been a steady batsman at No. 4 generally and will continue to retain his place there. Brendon McCullum’s streak of runs may have thinned out a little bit on the two tours of England and Australia but he is an astute leader and irreplaceable in the current Kiwi setup. Moreover, a series at home may help him rediscover himself. He will occupy the No. 5 spot. BJ Watling is a steady cricketer at No. 6 and he possesses the ability for long innings to drive his team out of adversity. The wicket-keeper definitely retains his place in the team. READ: Nigel Llong removed as third umpire for Test series between New Zealand and Sri Lanka

Lower Order and bowling: Mitchell Santner emerged as a real find for New Zealand when he played two calm-headed innings in tense situations against Australia in the first ever day-night Test. He can even be a handful with the ball but that aspect of his game needs further nurturing. Yet, in all probability he will hold down his No. 7 position.

Since Santner’s left-arm spin bowling is yet to flourish, off-spinner Mark Craig is likely to retain his position in the side owing to his experience. He has been in torrid form and was the least impressive of all New Zealand players in their tour of New Zealand. He will have to put in good performances to ensure his position at No. 8 remains intact in the future. One thing that works to his advantage is his handy batting abilities lower down the order. Doug Bracewell did not do too well on the Australia tour and is likely to make way for Neil Wagner. Tim Southee and Trent Boult are mainstays in the team and are a lethal duo in swinging conditions like is often the case in New Zealand. They hold down to their spots. POLL: New Zealand or Sri Lanka? Who will win the 1st Test at Dunedin? 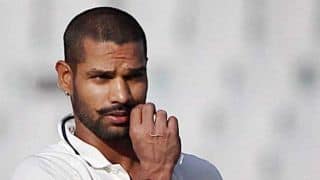