Happy hunting ground or not, the Proteas were found floating in a rigged boat by the end of the day, as they trailed the Blackcaps by 244 with 8 wickets in their kitty.

As expected, the second Test between New Zealand and South Africa exhibited a beguiling contest on Day One. The Basin Reserve at Wellington has always been considered a fast bowler’s paradise, which today (after 1946) was proven wrong. South African spinners accounted for 6 wickets between them to dismantle New Zealand for 268 runs. Happy hunting ground or not, the Proteas were found floating in a rigged boat by the end of the day, as they trailed the Blackcaps by 244 with 8 wickets in their kitty. Let us have a look at some of the highlights from Day One: FULL CRICKET SCORECARD, New Zealand vs South Africa, 2nd Test at Basin Reserve, Wellington

Morne Morkel s opening burst: Morkel, who had already bowled 2 maiden overs, could have nabbed his first wicket in his third. Tom Latham got struck on the pads. The appeal was turned down. Morne asked his captain to take a review, but Faf du Plessis refused instead. The replays then suggested the ball would have clipped the bail on the middle-stump. However, Morkel got Latham in the next over, caught at slip to an absolute peach of a delivery.

Kagiso Rabada s morning: With fire in his belly and greenery on the track, Rabada came out all guns blazing. His first 10 balls comprised off 2 wickets for zero runs. Kane Williamson fell leg-before to an incoming delivery, while Neil Broom, making his debut, fell to an out-swinging delivery for a duck.

Jeet Raval s stubborn 36: With partner falling at the other end, Raval displayed composure and stubbornness in the middle against an in-form pair of Rabada and Morkel. Slow to start his innings, Raval refrained from playing any flashy shots, playing textbook cricket strokes. It was only a brain-fade moment for Raval that he opted for the booming drive in the final over of the morning session that handed Keshav Maharaj his first wicket.

Henry Nicholls’ maiden Test ton: Nicholls displayed two sides of his batting today: fidgety and rigid. In the first session of the day, Nicholls showed signs of nervousness, while in the second he displayed control and in the final, he oozed out confidence. Nicholls, playing only 13th Test for New Zealand, absorbed pressure without much fuss in middle.

Nicholls exhibited fluid footwork against Maharaj to dash his hopes of another wicket. He recorded his maiden Test ton in style via a daring hook shot off Rabada. His innings finally came to an end on 118 off 161 balls inclusive 15 fours.

South Africa s disastrous start: With only 8 overs left, Dean Elgar and Stephen Cook looked nervous out in the middle. Cook continued his bad form getting out for 3. Elgar, who showed great control at Dunedin, poked away from his body, giving his wicket away and putting his side in a precarious position heading into Day Two. 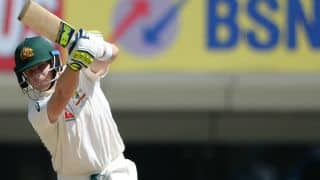