Nezam Hafiz: A talent that fell prey to terror on 9/11

Nezam Hafiz: A talent that fell prey to terror on 9/11

Anybody who knew Nezam, would tell you how much he loved cricket.

An aspiring cricketer’s flight to international cricket was cut short by the dreadful ‘American Airlines Flight 11’ on September 11, 2001. Chinmay Jawalekar looks at the life of Nezam Hafiz, the only First-Class cricketer to have died on the fateful day of 9/11 attacks.

Anybody who knew Nezam, would tell you how much he loved cricket. To put it into his father Cecil’s words, “You would see him every day at the cricket ground.” An attacking batsman, his First-Class stats don’t quite reflect his true potential. If his innings of 116 at the Under-19 level against a strong Leeward Islands side is anything to go by, his stroke-play was flashy, marked by immaculate timing and flamboyance. Nezam represented Guyana in six First-Class games, but soon wrapped things up to move to USA in search of a better life. Cricket, however, remained his priority.

After moving to USA, Nezam started making rapid strides — both as a professional and a cricketer. He shuffled through a few jobs before settling as a Claims Analyst for Marsh & McLennan in Lower Manhattan. Around the same time, his reputation was fast increasing in USA cricket. He was doing quite well for his club at the American Cricket Society and in the inter-league tournament in New York.

On expected lines, Nezam was named the vice-captain for an USA tour to Canada in 2001. Those days, the USA team were peaking and he was a vital cog in their wheel. As a matter of fact, he was one of the contenders for the captain’s spot for the ICC Champions Trophy in 2004, for which the USA had qualified. It wouldn’t have come as a surprise, the captaincy, for he had inspired enough confidence by successfully leading the Guyana Under-19 team, his club team at the ACS and his CCL squad in New York’s inter-league tournament in the past. To see him lead the USA side would have been a proud moment for the Hafiz family, but sadly it never came.

A dastardly terror attack on September 11, 2001 snatched this talented sportsman’s life. That ominous Tuesday was just like another day for Hafiz and the 32-year-old was early to work. He was inside his office on the 94th Floor of Tower One of World Trade Centre and never came out. It was a tragic end to a life that offered so much. A person who was generous, affable and had an infectious personality certainly deserved to live more. That he donated some of his equipment to players at his former club from the younger days who needed it, underlines the fact that he was a nice human being.

His former teammates and friends at his New York Club commemorated his life by organizing a cricket match in his memory every year for the first five years after his passing and also on his 10th death anniversary. But sadly, the USA cricket did nothing in his remembrance. Today, he is an unknown figure to the newbies of USA cricket. But he exists, in the memories of his family, friends, teammates and of course as one of the 2,983 names in the National September 11 Memorial and Museum at the World Trade Centre site. 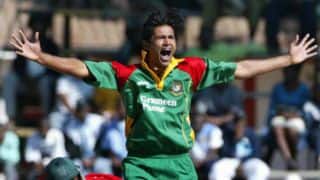