Like Rahul Dravid and VVS Laxman, and unlike Sachin Tendulkar, Zaheer Khan never got a farewell Test.

Finally, he has to go. Like Rahul Dravid and VVS Laxman, and unlike Sachin Tendulkar, Zaheer Khan never got a farewell Test. Zaheer, by some distance the greatest fast bowler India had in the 21st century, and the only great left-arm fast bowler in the history of the nation, was left lying in the cold for the past year-and-a-half. READ: Zaheer Khan retires from international cricket with immediate effect

It was not that he had done poorly. He had taken a five-for as New Zealand lost only eight wickets in the second innings as Brendon McCullum saved the Test with 302. Mohammad Nissar had taken a five-for in his last Test, but that was also India’s last Test before World War II. Vivek Razdan had done the same, and nobody knows why he never played again.

And then Zaheer did the same. To be fair, he was not fit. We all knew he had to bow out, call it quits, at some point of time. Bhuvneshwar Kumar and Mohammed Shami had had excellent starts. Umesh Yadav and Varun Aaron have pace. And Ishant Sharma is, well, Ishant Sharma. There was no way they were going to recall Zaheer.

But we had hoped there will be one last hurrah for him, for this was Zaheer, the man who had come back from umpteen injuries to hit back time and again. It did not happen. Sigh. India’s spearhead of the 2000s bowed out with a couple of cyber-announcements. He trended today on Google and Twitter and Facebook, but will be forgotten when India will play their next match.

I remember Zaheer bursting on to the scene at Nairobi. I remember him clean bowl Steve Waugh with a low, quick, straight near-yorker. It was the kind of delivery Indian fans had seen their heroes deliver — but only in their dreams. They were not used to their fast bowlers hitting the base of stumps of batting greats. READ: Zaheer Khan retires from international cricket: Full text of retirement speech

Mentions of Indian fast bowlers evoked mentions of Mohammad Nissar and Amar Singh — names Indian fans have heard of but are generally clueless about. Kapil Dev is spoken of with great respect, mostly because doing otherwise would be blasphemous. And Javagal Srinath, well, they had seen live on television, especially in World Cup 2003.

But they were all 20th-century bowlers. Zaheer was different. He was stylish. He was funky. He grew a stubble. He wore trendy outfits and cool shades. These were things batsmen did, not bowlers.

At the same time, he bowled toe-crushing yorkers. He gave it back to the opposition. He provided instant results. He was brilliant in the final overs in limited-overs cricket. He punched the air in ecstasy. He gave send-offs to batsmen. CK Nayudu or Madhav Mantri would not have approved, but Generation X took him as one of their own.

Jarrod Kimber summed him up best: “Blessed with shoulders like a cartoon superhero and a permanent three-day growth, Zaheer was set up perfectly to take over the Indian bowling line up.”

He bowled brilliantly in World Cup 2003. Sourav Ganguly acknowledged his performance by giving the first over to him ahead of Srinath midway through the tournament. READ: Zaheer Khan: Winning ICC Cricket World Cup 2011 was something really special

The fans and media went gaga over him. They called him the next Wasim Akram, something he was not. And thus started the dip: he lost the rhythm, he became more and more predictable, and he slowly faded into the background.

New faces like Irfan Pathan, Lakshmipathy Balaji, RP Singh, Munaf Patel, and S Sreesanth emerged. Old faces like Ashish Nehra and Ajit Agarkar resurfaced. India played five fast bowlers at Lahore in 2005-06: Zaheer got a bowl in the 41st over, almost as an afterthought, after Irfan, Sreesanth, RP, Agarkar, and even Sachin Tendulkar.

He was mauled by Shoaib Malik and Abdul Razzaq, conceded 36 in 4 overs, and was dropped. He was nowhere close to what he was. Persistent injuries did not help. The boy who once bowled yorkers with unreal ease had vanished somewhere into oblivion. The same media that had once called him the next great thing now wrote him off.

But then Worcestershire happened. In a new country, under new conditions, Zaheer started a new innings, picking up 10 for 140 against Somerset and 9 for 118 against Derbyshire in his first two matches. He scythed through Essex at their den, taking 9 for 138 in an innings. He played a stellar role for Worcestershire, who finished second in the Second Division. He had 78 wickets at 29.07 in the season, finishing next to only Mushtaq Ahmed; but then, in county cricket, everyone seemed to take fewer wickets than Mushtaq Ahmed.

That tour changed everything. The 13 wickets in South Africa came at 30.38, but once under familiar circumstances, Zaheer won a series for India in England after 21 years, taking 18 wickets at 20.33. He had 4 for 59 and 5 for 75 at Trent Bridge — one bowled, three leg-before, and five caught by the ’keeper or in the slips.

Then the ascent began. It was not a path as steep as the one that saw him out of the side, but he the climb continued nevertheless. The run-up was shortened. The pause just before release was taken care of. The pace came down by a yard or two. But the repertoire now included reverse-swing, cunning variations, and that delivery they called ‘knuckle-ball’.

Michael Hussey probably remembers that ‘knuckle-ball’ at Motera the same way Andrew Strauss and Ian Bell remember those two balls at Chinnaswamy. If Yuvraj Singh was Man of the Series in World Cup 2011, Zaheer was the bowler of the tournament. In fact, he was India’s leading wicket-taker in all three World Cups he has featured in. READ: Zaheer Khan was India’s ‘Very Own Wasim Akram’

The hair found a tinge of artificial brown to it. He looked ready for the 2010s. Somehow he acquired a nickname ‘Zak’. Nobody remembers who called him Zak first, but somehow it all seemed very fitting.

India reached the No. 1 spot in Test rankings. Zaheer was the spearhead and the mentor. They were set out to regain the rubber, to conquer England. Zaheer, as expected, removed both openers cheaply in the first Test at Lord’s, and was bowling like a dream. Things were going as per plan.

Then he pulled a hamstring, hobbling out with enviable figures of 13.3-8-18-2. Indian cricket would not be the same again.

By the time he returned, a new pack had arrived, reminiscent of the goings-on from almost a decade back. He was young the last time it happened; he had roared back following that stint with Worcestershire; but now, in his mid-30s, age had finally caught up with him.

He was left out, but Ishant Sharma not delivering, Sreesanth banned, and Munaf and Praveen Kumar disappearing without a trace, they needed a spearhead. Zaheer went to South Africa, took first over, and went through the usual ordeal (read: removed Graeme Smith). His 300th wicket was Jacques Kallis.

He took 16 wickets in his last 4 Tests — in South Africa and New Zealand — but they came at over 40 apiece and at 12 overs a wicket. Ishant had 20, and Mohammed Shami, 16. The others never matched him.

But he could not retain a spot. He was on his way out. He did not play a single First-Class match after the New Zealand tour; neither did he play 50-over matches. He continued to appear in the shortest format, but it hurt to see a 300-Test-wicket man reduced to bowling in reds and blues and pinks.

It is perhaps time to let go, after all. 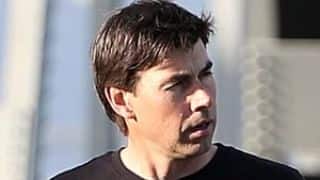