Nigel Llong and the unwanted DRS conversations in India matches

Nigel Llong and the unwanted DRS conversations in India matches

Unlike us, umpires have a fraction of second to make a decision and it is quite possible to get things wrong. Having technology to assist them only relieves them of undue pressure. Just like it is turning out to be a norm to check a no-ball before judging someone out, a series without Decision Review System (DRS) continues to be a handicap for umpires to make close calls. Abhijit Banare explains... 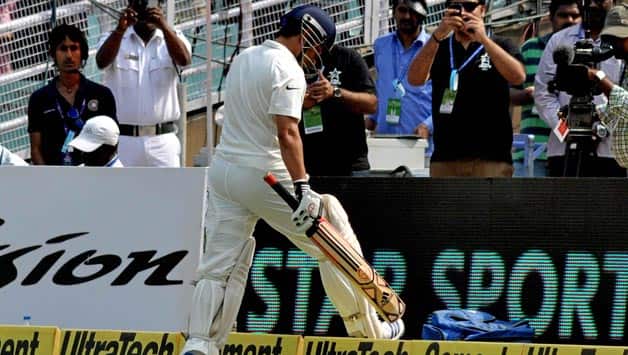 Sachin Tendulkar (above) was given out leg-before for 10 in the first Test against West Indies at Kolkata by Nigel Llong. Replays showed the ball was passing above the stumps © IANS

Unlike us, umpires have a fraction of second to make a decision and it is quite possible to get things wrong. Having technology to assist them only relieves them of undue pressure. Just like it is turning out to be a norm to check a no-ball before judging someone out, a series without Decision Review System (DRS) continues to be a handicap for umpires to make close calls. Abhijit Banare explains…
When Sachin Tendulkar was out leg-before for 10, the heart sank and you embraced yet another early Tendulkar dismissal. Thankfully it wasn’t a bowled to add to the pain. Yet when the side-on replays appeared, there was a sudden spring to the seat from every television viewer. And the soft corner of your brain suddenly replied in unison, ‘ooh that was an umpiring blunder.’ Like you, even Ravi Shastri had a similar reaction. The only difference between you and Mr Shastri was, the former category remembered ‘if DRS was there…’ while the well-respected commentators including Shastri didn’t feel the need to.

Llong’s umpiring blunders weren’t limited to the iconic cricketer. It followed up with an equally contentious decision of Virat Kohli. Two days later, Tendulkar had a torrid time appealing for a plumb leg-before decision. Marlon Samuels in the second innings walked back to the disgust of being hit on the pads with more than two stumps visible at the point of impact. If that wasn’t enough, Mohammed Shami, on that day, could have registered a 10-wicket haul, if another plumb leg-before against Veerasammy Permaul had been given in the fiery over where he already had two scalps.

Somehow when you watch a contentious decision involving India, you are forced to gulp down the odd dismissals without much detailed evaluation of the ball tracker. Few months ago, Ian Chappell made a valid point by saying that the DRS should be taken out of players’ hands and should be given to the umpire. I am sure Llong would have loved to use the technology more than the players. Why? Unlike us, umpires have a fraction of second to make a decision and it is quite possible to get things wrong. That’s what happened during Samuels’s dismissal in the second innings. After the over, Llong was seen explaining to Kettleborough that he felt the ball would have travelled downwards from the point of impact.

However, the umpire would have been relieved if he had the option of asking the third umpire if the ball was hitting the stumps or not before making a call. Despite all the issues and technical glitches with DRS, which some former India players and the Board of Control for Cricket in India (BCCI) have expressed, it could have easily helped Llong in making some minor checks with which many of the blunders could have been avoided.

While the umpires shuffle between series, with and without DRS, the decision to look the other way by commentators too doesn’t help the purpose. Perhaps in is some other series you would have seen Ian Botham and Michael Holding discussing about such dismissals in detail using the various angles that technology offered and have a healthy discussion. The Ashes earlier this year was a fine example. However, it is surprising to see that Aleem Dar and other umpires went through such microscopic scrutiny for their blunders during the Ashes 2013, whereas in India many of them have been forced to look the other way.

In an earlier article that discussed the art of manufacturing consent, it was discussed that the BCCI benefited from using personalities who maintained an assertive influence on the audience. With the fine set of commentators in this series and the observation they bring with such great experience, it is obvious that they are equally adept in discussing various other issues including technology which the board restrains them from. Soon we might end up in a phase where India could be left isolated in its own shell on the use of technology while the others would have befitted with the evolving stages of technology trying to improve the efficiency.