Hampshire needed a solitary run to win, so the Nottinghamshire fielders didn t even bother to change.

It had not been a month since Don Bradman had announced himself on English soil for the first time with a resounding 236 against Worcestershire at New Road. By mid-August he would lay claim as the greatest batsman in contemporary cricket.

But this was still May. It was one of those early-season matches at Southampton. The enigmatic Arthur Carr was leading defending champions Nottinghamshire. The threat of Harold Larwood and Bill Voce loomed on the Hampshire batsmen.

Things, however, went awry after Carr opted to bat. Jack Newman took 5 for 18, while Alex Kennedy and Lofty Herman shared four more. Between them they skittled out Notts for 69. The tourists hit back, restricting Hampshire to 125, Larwood taking 2 for 39 and Voce 4 for 32.

And then Notts lost 3 wickets before stumps. All this happened on Day One.

The second day saw Dodger Whysall and wicketkeeper Ben Lilley score fifties and take the tourists to 226. The target was 171. Sam Staples then got 2 quick wickets and Voce 3; at 106 for 5 Nottinghamshire sniffed a chance, but Kennedy and Len Creese got their runs quickly.

There was also some hurry to round the match off by the day. The batsmen got their runs by the minute, but could unfortunately exactly level the score.

The Hants batsmen pleaded for some extra time. After all, exactly one run was needed. It really did not make sense for the two teams to come out again for another day. It made even less sense for the tourists, who could return home for a much-needed day s rest

But Carr was adamant. In a case of this sort each side ought to abide strictly to the rules, he explained later in his column in The Courier-Mail. There was another aspect as well: If it had happened to rain hard during the night, and next day play might have had to be abandoned, and we should have saved the game instead of losing it.

Unfortunately, the rain never happened. The umpires, George Beet and Bill Reeves, stuck strictly to tradition and emerged in white coats. Kennedy and Creese, too, walked out in flannels and donned pads and gloves. However, the fielding side had other plans.

Fred Barratt, Larwood s new-ball partner for the match, walked out in an overcoat. Voce did the same. The others were in their travel attire as well, complete with jackets and hats. The small group of spectators who assembled to the game completed were smiling just as broadly as the visiting side when they strolled on to the field, reported The Glasgow Herald.

The fielders scattered in Brownian motion. And Carr, who had not bowled since 1929 and not taken a wicket since 1928, came on to bowl his military-medium pace in a well tailored dark suit .

Kennedy saw off the first ball and hit a four off the next, and that was that. Carr and his men left for home. 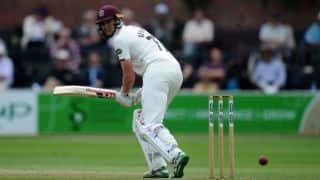 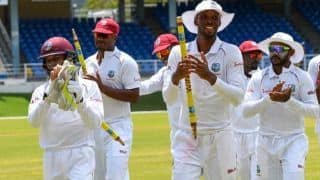