Brijesh Patel, born November 24, 1952, was a fine middle-order batsman who played 21 Tests for India. Karthik Parimal looks back at the career of this prolific run-scorer at the domestic level and brilliant fielder.

Brijesh Patel, born November 24, 1952, was a fine middle-order batsman who played 21 Tests for India. Karthik Parimal looks back at the career of this prolific run-scorer at the domestic level and brilliant fielder.

One of Karnataka’s key players a few decades ago, Brijesh Patel was a force to reckon with in the domestic arena. His prowess in this circuit fetched him a call-up to the national side at the age of 22. However, his Test career got off to a sombre start, as he managed just 10 runs in his first two Tests against England in June of 1974. Nevertheless, he made his presence felt on the international stage with a 78-ball 82 against the same opponents in an ODI match played a month later at Leeds. This made him a regular in the Indian side for the next one year.

On his day, Patel was capable of bludgeoning the best of the bowlers. But in international cricket, it’s only a matter of time before your weakness gets unearthed. Patel’s susceptibility against fast and swing bowling soon came to the forefront, and he struggled in his first series against England in their backyard in the summer of 1974. When the West Indies came touring later that year, Patel still couldn’t establish a foothold in Test cricket, scoring just 64 runs in the first two games of that series, but ended with an unbeaten 73 in the third Test played at Mumbai.

The first ODI World Cup was a forgettable affair for India, winning just one game against East Africa and losing to England and New Zealand before bowing out. The first game against England remains a hard pill to swallow, thanks to Sunil Gavaskar and Patel who played one of the slowest knocks in ODI history while chasing a mammoth total of 334. Gavaskar crawled his way to 36, batting through 60 overs, whereas Patel scored 16 off 57 balls. It was during this game that a spectator ran onto the ground and pleaded with Patel to get a move on. Famous English cricket writer John Woodcock wrote the following in The Times: “From the Mound stand, where the police were kept as busy removing rowdies as if it were the Hill at Sydney, anyone who could break the cordon came to plead with the Indian batsmen to play the game properly. But it was no use.”

Patel managed just 25 runs in his 3 games at the World Cup.

Despite a poor showing at the 1975 World Cup, Patel featured in the squad making the trip to West Indies in the March of 1976. Perhaps his 81 against New Zealand at Wellington a month earlier raised hopes; however, he wasn’t picked for the first Test at Barbados.

In the second Test though, Parthasarathy Sharma made way for Patel, and it was in this innings that the latter cut loose. Against a bowling line-up featuring the likes of Andy Roberts, Michael Holding and Bernard Julian, Patel smashed an unbeaten 115 to help India gain a lead of 161. After losing the first Test by a hefty margin, the moment was perfect for India to level the series. However, an unfortunate incident prevented it from happening.

Ramachandra Guha describes the episode in his book, Wickets in the East: An Anecdotal History, “As West Indies struggled to save that match, their captain and anchor Clive Lloyd top-edged Srinivas Venkataraghavan high into the off side. Going for the catch, Eknath Solkar, fielding as 12th man, bumped into an equally eager Brijesh Patel, and the chance was spilled. Ironically, Solkar was on the field only for that one over, while Bhagwat Chandrasekhar had gone off to change his bootlaces. Lloyd didn’t make another mistake, batting on to save the match. Ever quick to turn on their heroes, for once Indian fans did not know whom to blame, for if Patel was by far the finest fielder in the playing side, Solkar was better still.”

The incident was soon forgotten though, as India won the next Test by six wickets, chasing down a gigantic total of 406. It’s a victory that will forever be etched in the memories of Indian supporters. Patel was sent in to bat before Solkar in that game and the move paid off. He scored a steady 49 and was a fine support to Gundappa Vishwanath and Mohinder Amarnath at the other end. KN Prabhu, the doyen among Indian cricket writers, wrote, “It was a wise move to send Brijesh Patel ahead of Eknath Solkar. Patel, with his bristling moustache looked like a Bombay pirate, and he played the part by plundering runs. Everything was grist to the mill — mishits, byes — and there were also some dazzling strokes as Patel and Amarnath raced each other. When Patel pulled Jumadeen to bring up the victory with six mandatory overs remaining, the crowd came racing to the pavilion, and the cheers of the Indian supporters echoed from the Northern Hills which towered over the skyline.”

Although he couldn’t maximise his potential on the international stage, Patel was feared at the domestic level. He had 11,911 First-Class runs to his name, with 37 centuries and 55 fifties under his belt. He averaged an impressive 45.63 as well. He held the record for most runs and centuries in Ranji Trophy for a considerable amount of time. Although he donned the national colours for a little over five years, Patel played domestic cricket for 16 years, amassing more than 7,000 runs in the Ranji Trophy alone. “Had the helmet come in to cricket back then, I would have continued for another five-six years,” stated Patel. Solkar, one of India’s finest fielders, rated Patel and Ramnath Parkar highly as cover fielders. 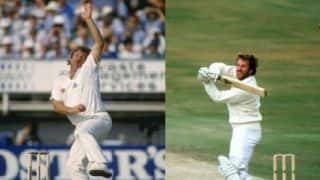 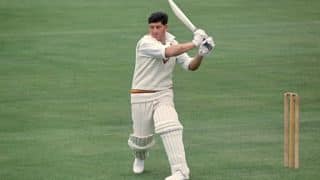