Graeme Swann has done what Shane Warne couldn't do before .commanded the respect of Indian batsmen and at times even foxed them and bossed them. 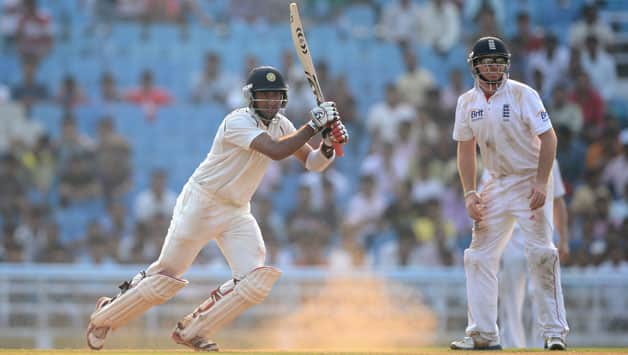 Graeme Swann has done what Shane Warne couldn’t do before —.commanded the respect of Indian batsmen and at times even foxed them and bossed them. Watching Swann bowl, with virtually no variation, but good, disciplined off-spin, makes one feel that doosras and carom balls are over-rated weapons. Most pundits have pronounced that Warne’s success was attributable chiefly to his accuracy and then to his ability to intimidate. Swann may be the off-spinning version of a Shane Warne-style bowler. It’s always fun watching Indian batsmen play good spinners.

If anyone truly mastered Swann, it was Cheteshwar Pujara. This guy has vindicated everyone’s trust in his ability. His composure is remarkable. He wasn’t batting too slowly; he was simply batting according to the ball being bowled. So at times he seemed to be circumspect and at other times he seemed aggressive. But nothing was pre-determined about his batting. It was like watching Geet Sethi notch up his huge scores on the Billiards table. Keep going by playing according to the merit of every ball being bowled, nothing more or less. Being on 98 overnight was a direct product of this discipline. It was almost like he truly internalised Sachin Tendulkar‘s mantra that 100 is just a number. Pujara is practicing what Tendulkar wishes he could. We all know that even the great Tendulkar plays differently while approaching landmarks.

The question that comes to mind is: Are the selectors looking in the wrong places for replacements? Pujara doesn’t set the T20 world alight. He doesn’t play ODIs for India. He is a thoroughbred Test batsman. Maybe he’ll break into the ODI team, maybe he won’t. But his Test place is assured. We were worried whether he can replace Rahul Dravid, and he has. Pundits will say, “Well, we have to see how he performs overseas.” Considering his temperament, I’m sure he’ll do well overseas too. And if one or two centuries per overseas series are the benchmark to keep your place in the team, then he’ll easily make it.

Virat Kohli seems to be hitting bad form. He could do no wrong in the last 12 months and it appears that he is now finding run-making that much more difficult. But I give him a lot of credit for struggling through his 67 balls and not giving away his wicket. He should have been taken by Jonathan Trott early on, but he shrugged that off and kept going. Attitude wise, there were no shortcomings, but I do believe that his form is beginning a worrisome downward trend. It happens to every batsman, but they work it off. Time for Kohli to spend time with coach Duncan Fletcher and figure out a way out of this. He needs to grit it out.

Yuvraj Singh, too, played a determined innings and his hunger was evident in his approach. This is fantastic for Indian cricket that Yuvraj is trying hardest to secure his a Test berth. I hope he makes a couple of good hundreds in the next few Tests coming up and cements his place in the side for the next eight years or so. For India, a formidable Yuvraj coming in at No 6 can only demoralise the opposition bowlers. He can take the fight to the opposition or be willing to buckle down and graft. Basically, he has to bat according to the demands of the situation.

I have no words for Virender Sehwag‘s hundred. Whatever I say, he can prove me wrong in the next few matches. He could end up throwing his wicket away or he could slam a triple. The guy is crazy! The team can afford him and also feed off him. His failures don’t necessarily result in losses, but his successes invariably lead to victory.

And finally, the elephant in the room — Sachin Tendulkar. What’s he doing in this team of kids? It’s like Amitabh Bachchan playing a collegian in a Bollywood movie! I’m sure he’ll reel off a couple of hundreds in this series. He’s still got it. But I’m not watching the Test matches to see him score hundreds anymore. Been there, done that. Now I’m watching Pujara, Kohli and even the new Yuvraj and perhaps Ajinkya Rahane or Rohit Sharma.

Moosa Mangera, the Jonty Rhodes of the apartheid era, passes away in South Africa