The first Twenty20 International (T20I) of the three match series between Pakistan and West Indies was played at Dubai. Bowling first, Pakistan’s all-rounder Imad Wasim run through the Caribbean side, which is famous for their long, deep and strong batting line-up. Only batsman to put up a fight was Dwayne Bravo who was able to score some runs, 55 off them and ensured his team put up a decent total of 115. In reply, Pakistan chased down this below par total quite easily by losing only one-wicket of Sharjeel Khan. In the course of chase, Babar Azam made his first fifty of his T20I career and won the match for Pakistan by 9-wickets. With this resounding win, many records were broken and re-written, Abhishek Kumar presents some interesting statistical highlights from this match.

•    Partnership of 66-run between Bravo and Taylor is now the highest by any pair for 9th wicket in T20Is. They broke the previous best partnership record of 63-run for 9th wicket between Saeed Ajmal and Sohail Tanvir set against Sri Lanka in 2013.

•    115 is the third lowest total by West Indies after losing all 10-wickets in a T20Is. Also, this is their lowest total against Pakistan in T20Is.

•    First instance of left-arm bowlers taking 8 wickets in an innings of a T20I.

•    Bravo made 55 and similarly Babar Azam also made unbeaten 55. This is now the highest and first fifty-plus identical score by two batsmen from different teams in the same T20I. 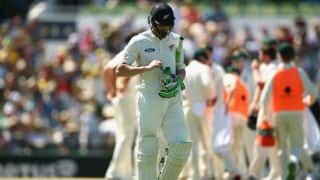