Although Pakistan’s cricket team has seen victories, cricket in Pakistan seems to be on a downward spiral. The Pakistan Cricket Board (PCB) has taken many steps including the hiring of a foreign coach, but all steps taken by the board have failed to boost the team’s performance.

Although Pakistan’s cricket team has seen victories, cricket in Pakistan seems to be on a downward spiral. The Pakistan Cricket Board (PCB) has taken many steps including the hiring of a foreign coach, but all steps taken by the board have failed to boost the team’s performance.

In my view, this decline can be attributed to weak personalities regularly appointed to run the PCB, who for the sake of prolonging their job, have repeatedly hesitated to take bold steps and instead, succumb to the pressure applied by the players.

For instance, the PCB selection committee did not include young blood in the team in order to appease the senior players. It was also due to fear of defeat. Even when young players were selected on a few occasions, they were dismissed soon after, without being given a proper chance to show their talent. Haris Sohail, Hammad Azam, Awais Zia, Shakeel Ansar, Mohammad Rizwan and many others were shown the door without being given a fair chance to prove their mettle.

In recent years, cricket analysts have been insisting that the team needs fresh blood but their pleas have fallen on deaf ears. Immediately after the World Cup in 2011, all international cricket teams began to prepare for the future and inducted young players into their teams. On the contrary, Pakistan continued with its aging players and now, as can be seen, the performance of these players is on a consistent decline.

The mantra of the selection committee is that talent in Pakistan is drying up. This, however, is simply not true. The reality is that Pakistan has abundant talent but we lack visionary selectors who can spot that much-needed talent and draft new players in the team at the right moment. Pakistan, which was once famous for drafting young players in its team, has the most aged team at the moment. Take the Twenty20 (T20) format for instance; this is a format considered for young players, however, the average age of Pakistan’s T20 team is also on the higher side, nearing 30.

Needless to say, an ageing team affects the team’s performance in this segment. The PCB has a history of making hasty decisions and then taking back their decisions due to team pressure. A case in point in is the fine and ban imposed by the PCB on a number of players on disciplinary grounds after the Australia tour in 2010. This imposition was accompanied with quite a bit of fanfare and the board claiming that it would not compromise on discipline. However, it all turned out to be a farce when within three months the fines were waived, the ban was lifted and most of the players were taken back into the team.

The PCB needs to develop long term plans which should be followed with sincerity and not be changed or disrupted by a change in the board’s chairmanship. After Ijaz Butt was appointed to the chair in 2008, the first step that he took was the removal of foreign coach Geoff Lawson.

What is PCB’s stand on foreign coaches?

This was done on the pretext that a foreign coach is not viable for Pakistan. On the contrary, his successor Zaka Ashraf did the exact opposite and once again a foreigner, Dav Whatmore, was appointed to coach the team in March 2012.

In its early years, the PCB worked on an honorary basis but now it is a humungous organisation with people attached to it drawing high salaries and enjoying perks. However, little is being done for the development and improvement of the sport in Pakistan.

In the past, when Pakistan had only one state-owned television channel, final matches of domestic tournaments were broadcasted in order to inspire youngsters. However, now when we have many sports and news channels, PCB is not using this platform to project the country’s domestic cricket. In recent years, especially, domestic T20 tournaments have been promoted way too much. In my opinion, this tournament actually affects Pakistan’s cricket adversely, rather than promoting the sport.

Moreover, the PCB has failed to develop a consistent format for the country’s First-Class cricket and every year changes are made to the format. Former cricketer Basit Ali highlighted one glaring flaw in the current set up during a TV program. According to him, if a four-day match of domestic First-Class tournament finishes ahead of schedule, players do not get allowance for the remaining days. This means that in order to get their full allowance, players prefer to prolong the game.

In addition, the PCB and its affiliated regional bodies do not instruct groundsmen about the nature of pitches required for first-class matches. As a result, placid tracks are prepared at most centres. These docile pitches are another factor in our failure to produce high quality batsmen. Frankly, I think that the PCB should revert to the First-Class system which was in place in Pakistan in the 80s and 90s since that system with all its flaws was at least, regularly coughing up quality players.

If the government is serious about solving problems pertaining to cricket in Pakistan, the first step should be a complete overhaul of the PCB. It should remove all the ex-players who have been attached to the board for decades, but are unable to solve the current problems in the game in Pakistan. They should bring changes in the PCB constitution and convert it into a body where members are elected and not selected by the country’s higher authorities. An elected chairman can work freely without fear of being removed and can introduce a culture where merit is the criteria for taking all decisions.

Although Pakistan has many problems in its system, cricket still thrives in the country simply due to the deep-rooted public passion for the game. All the cricket team needs is a cricket board with a visionary people like ex-captain Abdul Hafeez Kardar, at the helm of all its affairs. Only then can our team return to its days of consistent glory.

(Khurram Zia Khan is a writer with The Express Tribune, where the article was originally published. His Twitter handle is @KhurramZiaKhan) 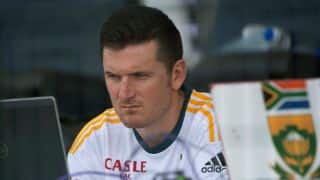