The upcoming tour of West Indies may not seem as exciting as some of the other series Pakistan have played recently. But the current tour is of utmost importance for Pakistan. With the series against Zimbabwe, South Africa and Sri Lanka to follow this year, West Indies tour is the crucial point where Pakistan can finally drop players who are not up to the mark and recognise young talent in their place © Getty Images

The upcoming tour of West Indies may not seem as exciting as some of the other series Pakistan have played recently. But the current tour is of utmost importance for Pakistan.

When the Chairman of Pakistan Cricket Board (PCB) himself says that Pakistani cricket is going through its lowest point, one has to sit up and make note. With no team ready to visit Pakistan, endless spot-fixing scandals and banned cricketers, a lack of quality players and a string of poor performances has left questions unanswered for Pakistani cricket fans.

Sadly, Pakistan does not have the luxury of this system. Most of Pakistan’s senior players are fighting for their own place in the team and the youngsters aren’t getting a proper chance to prove their talent. The ones who do get a rare opportunity fail for one reason or the other.

Let’s face the facts. Most of the players who have performed recently were not there because they deserved to play — they played for Pakistan because the team had no choice but to pick them. It is obvious that Pakistan lack bright, young talent.

Senior players — what Pakistan expects vs what they get

With the World Cup just a year and a half away, this may be the last chance for the remaining senior players to show whether they can carry on playing for Pakistan. Also, it is time to identify which young players need to be taken forward. Younis Khan has been long dropped from the One-Day International (ODI) setup. And now the selection committee has taken a ‘bold’ new step — perhaps because there was no other choice by dropping Kamran Akmal, Shoaib Malik and Imran Farhat for the West Indies tour.

Then there is Shahid Afridi. Afridi has played 350 ODI matches over a span of 17 years yet he doesn’t have a permanent place in the team. Ideally, such a senior player should be the backbone of the team. But Afridi has been brought back without any First-Class performance to show for himself. This may not be his last chance judging by the number of comebacks he made, but if he fails once again it will temporarily put him on the sidelines at the very least.

Misbah-ul-Haq seems to be in the form of his life but as captain, his decisions have been under fire of late. After the disastrous tour of South Africa and the disappointing ICC Champions Trophy 2013, this will be the last chance for him to prolong his stint as Pakistani captain. Now that the PCB chief has issued orders for the team to ‘enhance the level of performance’ and announced that he will review the contract of Dav Whatmore in six months, Pakistan desperately needs some change. Let’s hope Misbah can foster some of this change.

Some players to keep an eye on

Pakistan’s bowling is their stronger point. In fact, Pakistan may actually have enough bowling talent right now, at this very moment. With the new addition of Asad Ali, things should improve further.

Another promising bowler, Abdur Rehman has been with the team for a while now. But after a brilliant series against England he hasn’t played regularly for over a year now. If he doesn’t get a proper chance in this series, he may be dropped in favour of other young spinners like Raza Hasan. Let’s hope he can give Pakistan something to cheer for.

A few months ago, Mohammad Hafeez was the top all-rounder in world cricket. However, the tour of South Africa has shaken his confidence, thanks to Dale Steyn. Hafeez’s bowling form has dipped along with his batting performances. Playing against West Indies may be his best chance for a comeback. Bowling against a left-hand heavy team can make him a more effective bowler but it is his batting on which his future rests.

Young blood — what Pakistan cricket needs the most

This time around, Pakistan has also inducted some youngsters in the team. The 21-year-old Mohammad Rizwan selected as wicketkeeper deserves a proper chance. Umar Akmal has also been recalled but this time as a specialist keeper. For a player who is already under pressure because of his batting form, this burden may affect the youngster adversely. Nevertheless, it will be interesting to see how he performs with the added responsibility.

Umar Amin and Haris Sohail, the two left handers are also in the squad and seem promising additions. Aggressive Ahmed Shehzad is back too. He appears to be a good choice in the otherwise one-dimensional batting lineup.

A critical factor now for Pakistani cricket is how well they utilise their younger players — whether those selected for the West Indies tour are given a suitable opportunity to perform or not. They need to be properly assessed — have they progressed? Do they have what it takes to play international cricket? Only time will tell.

With the series against Zimbabwe, South Africa and Sri Lanka to follow this year, West Indies tour is the crucial point where Pakistan can finally drop players who are not up to the mark and recognise young talent in their place.

Pakistani cricket has seen enough disappointments lately — now they need to move forward positively, building up their strength as they approach the ICC World Cup 2015.

(Raafay Awan is a mechatronics engineer, cricket enthusiast and freelance writer. He tweets as @raafayawan and blogs at raafay-awan.blogspot.com/. The above article is reproduced with permission of http://tribune.com.pk/) 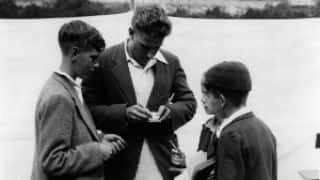