Pakistan in West Indies 2017: Marks out of 10 for the tourists after historic win

Pakistan in West Indies 2017: Marks out of 10 for the tourists after historic win

As Pakistan went for a quick declaration, Younis Khan and Misbah-ul-Haq ended their illustrious Test careers, perishing in pursuit of runs.

The first three days of the third and deciding Test at Roseau had almost eliminated the possibility of any result, but a splendid spell from Mohammad Abbas on the fourth morning gave Pakistan the upper hand. As Pakistan went for a quick declaration, Younis Khan and Misbah-ul-Haq ended their illustrious Test careers, perishing in pursuit of runs. The West Indians fought hard, none more than Roston Chase, who finished the series with an average exceeding 100 but a brain-freeze from No. 11 Shannon Gabriel let him down with an atrocious heave with the last ball he had to face. Misbah and Younis thus bowed out in glory, becoming part of the first Pakistan side to win a Test series in West Indies. At the end of a keenly-contested series, here is a report card for Pakistan.

Yasir was expected to get wickets. He finished as the leading wicket-taker of the series, taking 25 of them when nobody else got more than 15 from either side. True, he was assisted by some excellent fast bowling from Aamer and Abbas, but Yasir dominated the batsmen almost every time he bowled, especially in their second innings. He finished with a better strike rate (45.2) than the fast bowlers something spinners rarely do. He gets half a point for the 38 not out at Roseau that helped Misbah to declare, but loses it for being unable to finish things off in the decider at Roseau.

Even in his last series Misbah did exactly what he has been doing for years: he scored runs without a lot of people noticing. He did not get a hundred but there were two 99s one unbeaten, one dismissed. There was also those two arrogant sixes at Jamaica and that overcautious 59 at Roseau (where he was on 1 from 51 balls at one stage). There was also one challenging declaration; he also marshalled his troops quite efficiently, but then, he has always done that.

It is almost funny, the way Pakistan unearths extremely talented fast bowlers at the rate of five or so a year. This time it was Abbas, who bowled with great heart and accuracy, getting the ball to reverse at serious pace, and hurling the deadliest of yorkers to unsuspecting batsmen. His spell on the fourth morning at Roseau was indication of what he is capable of. All Pakistan need to do is to preserve and back Abbas: he is certainly one for the future.

Aamer is still not as his vintage best, but he was outstanding nevertheless. He moved the ball at a brisk pace, made the odd one jag, and when the wicket held nothing for him, he went back to the trusted mantra of line-and-length. The economy rate of 1.75 was just as crucial a statistic as his 13 wickets at 17.45 apiece. He also reached double-figures 4 times in 5 outings, which is good news for Pakistan.

You will probably be surprised if I told you that Azhar Ali stands a mere 32 away from 5,000 Test runs. He has accumulated runs single-mindedly in 2016, and 2017 is no exception. True, he did not go past 15 in 4 of his 6 outings, but he scored Pakistan s only hundreds in his other 2 innings. He gets half a point for that against-the-run-of-play wicket at Roseau.

Not all bowlers run through sides on Test debut, but they can at least keep the batsmen quiet. Hasan played the ideal foil to Aamer, Abbas, and Yasir (his economy rate of 1.48 bears testimony to that). He and was rewarded with 3 wickets in the fourth innings. He faced 11 balls for his 23 (he was not dismissed, to boot). That gets him an extra point, but he loses half for dropping Chase twice off his own bowling in the last day of the series though both of them were extremely difficult chances.

Younis started his series with a crucial 58, but followed that with 6, 0, 5, 18, and a face-saving 35. The string of failures was as frustrating for a fan as it must have been for the legend. However, he made up for that with his spectacular fielding, taking 4 catches at Jamaica, 5 at Bridgetown, and 1 more at Roseau. At least 4 of the catches at Bridgetown were difficult ones that he made look easy but hey, what is new in that?

Plucky and dynamic, Sarfraz set the tone at Jamaica with a quick 54, giving Pakistan a decent lead with time to spare. He was the only one to bat with some sense in the fourth-innings debacle at Bridgetown. And finally, he got another quick fifty at Roseau. His strike rate was an excellent 67, but Pakistan can do with some consistency from him, given that the two giants have hung up their boots. His wicketkeeping was neat but not spectacular.

Shehzad got Pakistan off to a brisk start at Jamaica, scoring a quick 31. Of course, a more crucial innings came at Roseau, where he carved out 70, helping Azhar Ali put on 155 for the opening wicket. That was it.

Babar scored 3 ducks in the series, remained unbeaten in another innings but scored important fifties in the other two. Both these innings came when Pakistan lost a quick wicket, and he did a good job on both occasions.

Masood was a late entry to the side. He failed in the first innings at Roseau but saw off the new ball in the second with 21. It helped, since Pakistan soon became 90 for 7. He gets half point bonus for the spectacular reflex catch to get Kieran Powell in the fourth innings.

Wahab got 2 wickets in his only Test: the first, when Vishaul Singh hit an over-pitched ball to square-leg; the other, when Jason Holder chased at one outside off and edged. That was it. It could have been an utterly forgettable outing, had he not taken the catch of the series to dismiss Roston Chase. That was definitely worth half a point.

Shafiq will want to forget this series. He never looked in control, which was unacceptable for a man expected to fill those giant shoes of Younis. No, he certainly needs to raise his batting to the next level.

Was Shadab thrust into Test cricket too early? Perhaps. There was turn on that Bridgetown pitch (Yasir got 9 wickets in the Test), but Shadab was handled with ease. He got Shane Dowrich, but that was more due to an excellent slip catch by Younis. 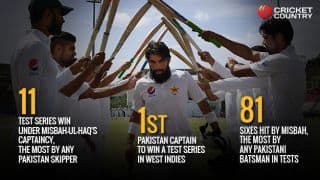 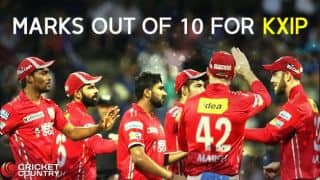