Pakistan have extended Zimbabwe a welcome that the members of the latter’s national team is not likely to forget in a very long time. The players have been surrounded by guns and security personnel from the moment they landed in the country, which should be reassuring for their well-wishers back home. Amit Banerjee however, feels that this step by the Pakistan Cricket Board (PCB) is one that they will have to put up for quite some time, if they are to allow international cricket to settle in their country once again.

Pakistan are the second country to have suffered some form of boycott in international cricket, South Africa being the other. Though Pakistan’s sentence is not as harsh as that of South Africa’s — inability to play international cricket in their backyard versus complete ban from the sport for two decades — it has had its negative impact on Pakistani cricket, from infrastructural losses to the inability of fans to enjoy the presence of international superstars at venues such as Gaddafi, National Stadium, etc. READ: “ICC does have a bias against Pakistan”

Not many countries were willing to tour the country from the start of the millennium, with New Zealand pulling out of a scheduled series in 2001-02. The situation worsened thereafter, with various teams slowly refusing to tour the nation completely. It had to explode of course, with the attack on the Sri Lankan team in 2009 that left a few visiting players and officials injured, along with the deaths of a few police officials. Nobody in their right mind would want to visit the country after such a harrowing incident for any purpose whatsoever. READ: Zimbabwe get ready for cricket in Pakistan amidst tight scrutiny

Zimbabwe’s acceptance of Pakistan’s request to tour their country is perhaps a new leaf in Pakistani cricket. And the board is leaving no stone unturned in ensuring the safety of the players, to the extent of making war-like preparations for two Twenty20 Internationals (T20I) and three One-Day Internationals (ODI). If the series turns out to be a successful one, it may very well change the fortune of cricket in the nation, even usher it back to its former days of glory. The Pakistan Cricket Board (PCB) would not have enough words to thank their Zimbabwe counterparts for the help that they would have extended. Interview — Umar Akmal: I’ve never had disciplinary issues with anyone

The PCB however, cannot afford to go complacent following the successful conclusion of the series. The country is in a political turmoil, where the government is constantly battling a coup by the military powers and religious fundamentalists. Recent attacks such as the one in Karachi, where gunmen opened fire in a bus and killed more than 40 people, serve as a reminder of the vulnerability of tourists in the nation. Also, the fact that extremist groups such as Lashkar-e-Taiba (LET) had issued a fatwa against the sport, only adds to the hostility that the sport suffers at the hands of the fundamentalists, who grow in power with each passing day.

The board therefore, may have to keep the security budget high from now onwards, until the security situation in the country improves for the better. It is but a small price that the officials have to pay to ensure that its players get to play in front of their home crowd, and not an ‘adopted’ one. 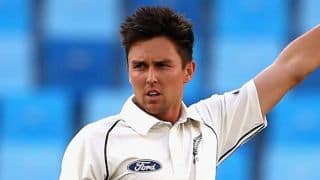