Pakistan tonight have an opportunity to give their true stakeholders — their fans — what they deserve and be proud of the team on the very day they enter their 70th year of Independence.

You may like or dislike the Pakistan cricket team, but there is no denying the fact that their fans deserve much more than what they have got over the past few years. You have to feel for the players who for years have been toiling under the sun and in front of empty stands in UAE in attempt to win their so-called home games. Unstable political scenario, looming threats of civil wars, terrorism, and more have plagued the cricket-crazy nation and have deprived them of quality cricket at home since that ill-fated Sri Lanka tour in March 2009. ALSO READ: Pakistani cricket fraternity wishes Happy Independence Day to their fans

Pakistan’s limited-overs fortunes of late have hardly been impressive compared to their excellent run in Test cricket. Of course, every failure gives critics, especially former cricketers, an excuse to jump at the players, digging deep their sharpened knives.

Pakistan cricket and chaos have shared their romance for long. But tonight their cricket team have an opportunity to give their true stakeholders — their fans — what they deserve and be proud of the team on the very day they enter their 70th year of Independence (and Rameez Raja’s 54th birthday, a piece of information that might seem irrelevant, but one must remember that he has been Pakistan cricket’s sole ambassador in these dark days) from the very nation they are playing against.

Alastair Cook and Joe Root are back in the pavilion. England are still some distance away from need another 126 to make Pakistan bat again in ongoing Test at The Oval, Wickets are running out. Pakistan are sniffing a win at the very city, London, from where the queen ruled the British India for centuries. In fact, in the same city, at Lord’s, Pakistan had won the first Test of the series to go one-up.

Pakistan are on their way to register their fifth Test win at The Oval, courtesy another Younis Khan classic and the resilience shown from the tail. Cricket has witnessed such grit in the past but with Pakistan the case has been either stellar shows or self-imploding, on this case, it was heartening to see the desire.

Earlier on this tour, Younis, 38, probably on his last tour to England (unless he pulls off a Misbah), seemed like a shadow of his pristine past. His technique was dissected by critics and a lot of minds spoke about the wrongs he was doing and how it was hurting Pakistan in this tour. The champion himself had other ideas and when the situation demanded, he made it count. ALSO READ: Cricket fraternity hails Younis Khan’s double ton against England in 4th Test

After winning the first Test at Lord’s, Pakistan were outplayed at Old Trafford. England came from behind to win at Edgbaston. A repetition of Edgbaston could have ensued at The Oval too. After bowling out England for 328, Pakistan were 397 for 7, when Sarfraz Ahmed walked back for a well-made 44. Younis was at 128.

From thereon, Pakistan went on to bat for almost 36 overs. While Wahab Riaz batted 32 balls, Aamer was unbeaten on 39 from 70 balls and Younis ended with 218, with runs coming at a strike rate in excess of 70. Pakistan added another 145 runs for their last 3 wickets and that made the difference.

The old warhorse Younis was their chief-in-command and the tail obeyed his decree. Such application is not a common phenomenon in Pakistan cricket where most believe in the Shahid Afridi book of hara-kiri approach.

The build-up and England

The cricket world was divided as Amir made his Test return at Lord’s, the very venue where he had tainted the sport six years back. Many Englishmen did not have pleasant words to say about the young left-armer, who had confessed and tried, while few English media headlines read ‘Match-fixer returns’.

The unneeded hostility took the centrestage at Lord’s ahead of the first Test, but skipper Misbah had forced the spotlight his way with a splendid ton and the celebratory push-ups that followed. Despite the criticism that followed the two defeats, Pakistan are a side who have tested England to the core.

Defeating England at their backyard is amongst the toughest challenges in cricket. After all the talks, a 2-2 result will not be different from any loss for the hosts and for Pakistan; it surely will be amongst the greatest moments in their cricketing chronicles. And mind you, with a win at The Oval, they can shoot to the No. 1 position in the ICC Test rankings, though it will depend on how the Sri Lanka-Australia and India-West Indies series conclude.

Pakistan should go all guns blazing today, for it is not merely another series. A chance to be the No. 1 in Tests for the first time, it is their Independence Day and their fans deserve some smile, also for the great Hanif Mohammad, who passed away the day this Test began.

The English pride has definitely been hurt, and their woes are only going to extend as India will look to better their neighbours when England tour them later this year. In conditions that have favoured Yasir Shah, England have not found answers. They better find some as India will dish out some rank turners and unleash Ravichandran Ashwin, Ravindra Jadeja and Amit Mishra; and mind you, England do not have the luxury of Graeme Swann and Monty Panesar anymore.

Not an ‘Independent’ wish

Pakistan celebrates its 69th Independence Day today, and India does the same on Monday. It has been nine years since both the sides played a Test. India, being a superior limited-overs unit, have dominated the ODIs and T20Is between them of late. However, fans have been deprived of Test cricket over this time.

Echoing the voice of millions in both the nations, I urge the organisers to stage a Test series between these two see two top-ranked sides with a history of riveting rivalry, to contest in a Test series. While Virat Kohli has revived India’s Test fortunes, Misbah is hell-bent to leave Pakistan cricket in a better space.

Happy Independence Day to both nations. Indian fans are all smiles after the empathic win over West Indies and at the brink of celebrations erupting in the neighbouring country, all we can do is ‘hope’. 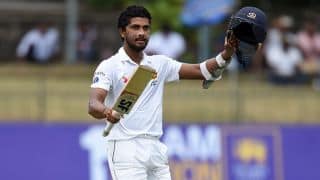