Skipper Misbah-ul-Haq might feel that Pakistan deserve to be the No. 1 Test team and the 2-2 result now give a chance to do so, however, their fortunes rely on Australia-Sri Lanka and India-West Indies Test series. Suvajit Mustafi evaluates Pakistan’s performance and rates the players in descending order.

Just over a month back, when England and Pakistan locked horns for the much-awaited Test series, the entire focus was on Mohammad Aamer, who was returning to Test fold after six long years; and it was at the same venue, Lord’s, where he tainted the sport’s image. Weeks later, Pakistan did the unthinkable. With an inexperienced bunch shepherded by a 42-year-old skipper, on his first full English tour, a young man trying to prove himself from his past-tainted self and an ageing warhorse, not many expected Pakistan to achieve the unthinkable — win two Tests in England. Full Cricket Scorecard, England vs Pakistan , 4th Test match

Pakistan went on to win at Lord’s and suffered back-to-back defeats at Old Trafford and Edgbaston, before drawing level at The Oval, where they won their fifth Test, also the most Tests they have won at any away venue.

Skipper Misbah-ul-Haq might feel that Pakistan deserve to be the No. 1 Test team and the 2-2 result now give a chance to do so, however, their fortunes rely on Australia-Sri Lanka and India-West Indies Test series. Pakistan have done their bit, and Suvajit Mustafi evaluates Pakistan’s performance and rates the players in descending order:

Misbah-ul-Haq, 8.5/10: The circle comes full for Pakistan cricket in England. Post the spot-fixing saga in England in 2010, Misbah oversaw the rebuilding and it bore results. In his first ever series in England, the 42-year-old marshalled his troops well and led them to a series draw. His hundred at Lord’s on the first day of the series set the tone for Pakistan. He led from the front, backed his boys, handled the Aamer issue well, captained brilliantly and finished with 282 runs at 40.28. ‘Age is just a number’. Misbah, hence, proves it. Do not be surprised if you see him chase Jack Hobbs’ records.

Sohail Khan, 7.5/10: Stamina and fitness are concerns for Sohail but the right-arm pacer (only right-arm pacer to play for Pakistan in this series) has done enough. Post the disaster at Manchester, Sohail was drafted in the side; and in both the Tests that he played, he picked five-fors. In Edgbaston, he took the Day One advantage and at The Oval, he struck when the Moeen Ali threat loomed. He ended up bagging 13 wickets at 25, a job, very well done. Also read: Pakistan vs England 4th Test, Day 4 Full Updates

Sami Aslam, 7.5/10: He was Pakistan’s find of the series. Sitting out in the first two Tests, Sami looked assured at Edgbaston. He looked in control. He knew which to leave and how to capitalise on scoring opportunities. Pakistan’s Manchester fortunes could have been different had this young man played there. The 20-year-old (yes, less than half of Misbah’s age) finished with 167 runs at 55.66.

Younis Khan, 7/10: You are as good as your last game. Till The Oval Test, his scores read 33, 25, 28, 1, 31 and 4. Younis must have heard the knell. He was not catching well, the runs had eluded him but a fine player that he is, he stood tall when the situation demanded the most. A call from former Indian skipper Mohammad Azharuddin and minor adjustments in his stance, the 38-year-old produced one of the greatest knocks by a Pakistani. His 218 at The Oval, was a display of splendour and intelligent batsmanship, as Pakistan went on to win the Test by 10 wickets. He finished as Pakistan’s highest run-getter with 348 runs at 48.57. Yes, he is far from over.

Yasir Shah, 7/10: Sometimes numbers can be deceiving. Yasir 10-wicket haul at Lord’s exposed England’s vulnerability against quality spin. He shot to No. 1 position in ICC bowling ranking in Test cricket. Then came the fall as the next two Tests did not go his way, but he toiled in unfavourable conditions before making a mark again in the final Test. His 5 for 71 in the second innings at The Oval ensured Pakistan the victory. Along with his 19 wickets at 40.73, he also made vital contributions with the bat, scoring 92 runs at 15.33. There is a reason that Shane Warne rates him very highly. Also read: Is this the beginning of Pakistan’s resurgence?

Asad Shafiq, 7/10: He is a name lost amidst the shining ones of Misbah and Younis, but once the two stalwarts hang up their boots, Shafiq will be the hinge of Pakistan’s middle-order. He made good contribution at Lord’s. In Edgbaston, he got a pair but promoted up in the order, and he followed the embarrassment with a fine hundred. Shafiq finished with 274 at 39.14.

Azhar Ali, 7/10: A slog over long-on off Azhar’s willow finished the series. He had a slow start to the series and was not lucky with umpiring decisions. However, his hundred at Edgbaston put Pakistan on top for a while in that Test. When the situation demanded, he was ready to open and did well. Azhar did fine to finish with 295 runs at 42.14.

Sarfraz Khan, 6/10: He has set high standards but did not really live up to them. His glove-work was not the best in first half of the series. He improved later. With the bat, he looked good, scoring at a brisk pace but not once did he get past the 50 mark. He made a few vital contributions, but a quality player that he is, you expect him to average in excess of 32.16.

Mohammad Aamer, 6/10: When the series started, the hype was all around him but he seemed undeterred by all of it. In the first Test, he troubled Alastair Cook. Had Pakistan’s catching matched their spirit, his overall tally would have looked better. No, he did not replicate the magic of 2010 but made a decent comeback in Test cricket. He finished with 12 wickets at 42.41 (again, do not fall for the numbers). Aamer’s other vital contribution was his resilient approach with the bat. His 97-run stand with Younis at The Oval shut the gates on England. It is not bad when your strike bowler scores runs at 21.40.

Wahab Riaz, 6/10: He is known to be a complete team man, and most of the time, luck eludes him. Again, do not fall for the numbers; his spell at Lord’s in the second innings was a treat to watch. He gave it all, finished with 10 wickets at 36 and scored runs at 12.40. He hung around with Younis at The Oval, and at Old Trafford, his 39 delayed the England win. Also read: The day Pakistan became Misbah-ul-Haq

Rahat Ali, 4/10: After a good start at Lord’s where he dismantled the England top order and claimed figures of 3 for 47, Rahat faded away from the scene. Another from the left-arm brigade, he is certainly a better bowler than what he finished with — 8 wickets at 50.87.

Iftikhar Ahmed, 3/10: His selection into the Pakistan XI for The Oval Test made him trend on social media. He disappointed when he gave away his wicket at a critical juncture, courtesy a poor pull-shot. James Anderson was hanging around for a while but Iftikhar dismissed him and bagged his maiden Test wicket. Too small a sample to evaluate him but the mode of his dismissal was disappointing.

Coming to the openers, while Masood gave catching practice to wicketkeeper and slips, Hafeez dropped at will…

Mohammad Hafeez, 1.5/10: Mind you, Hafeez was playing just as a specialist batsman. With his experience, Hafeez was expected to deliver goods at the top of the order. He got two scores of 40s but committed the sin of not making the starts count. At times, he gifted his wickets; and adding to his batting woes, he let down the side with his poor catching.

A good show from him could have been the difference between a drawn series and a win. 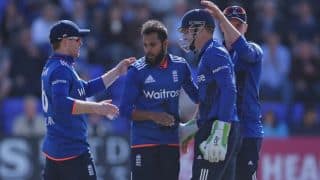