Pakistan wobbled to their seventh defeat out of eight international matches on the tour of Australia 2016-17, on Thursday, when the hosts completed a 57-run win at the Adelaide Oval.

Pakistan wobbled to their seventh defeat out of eight international matches on the tour of Australia 2016-17, on Thursday, when the hosts completed a 57-run win at the Adelaide Oval. Australia, thus completed an impressive 4-1 series win in the ODIs, which will give them the necessary boost ahead of their tours to New Zealand and India. Pakistan played overall poor cricket with several catches being dropped and not all of their batsmen stepped up to the challenge barring the usual culprits in Babar Azam and Sharjeel Khan. Australia s win was set up by David Warner and Travis Head, who were involved in a record 284-run opening partnership. Let us take a look at the highlights:

The costly drop: This series certainly sets yet another classical example of how important it is to take every chance that comes your way. In the second ODI, Steven Smith dropped Mohammad Hafeez in the first over, and the stand-in Pakistan captain went on to score a match-winning 72. In the final ODI, Mohammad Aamer made his typically impressive start. The first ball was pitched outside off, and it nipped away from Warner after pitching. Warner chased it, and got a thick edge that flew to the second slip, manned by Azhar Ali. The Pakistan captain made a desperate dive, and got his left hand on the ball. The attempt was brave but not enough; on another day with more luck, Azhar might have taken it. Warner went on to smash 19 boundaries and 5 sixes to score 179 in 128 balls. FULL CRICKET SCORECARD: Australia vs Pakistan, 5th ODI at Adelaide

The David Warner-Travis Head show: Warner consumed two lifelines on 0 and 132 to score 179. Head, on the other hand, showed some nerves early on against the ball that was nipping around, and also had initial struggles timing the ball. However, Head did not shy away for going for his shots and reaped the benefits of being audacious. His innings of 128 was his maiden century, and little did Head would have imagined that it would be a special outing. Along with Warner, he added 284 runs for the first wicket, which is now the highest stand for any wicket against Pakistan. Their first-wicket partnership is now the second-best overall. Warner scored 179, but it was the third occasion that the Australian run-machine was dismissed in that range. A double century looked on the cards but Warner fell in his bid to keep attacking.

Sharjeel Khan and Babar Azam s fightback: Pakistan made a poor start losing Azhar Ali early, but Sharjeel and Babar once again got together to revive their side. This is one job they have done very well of late, and Sharjeel and Babar showed why they are among the best young batsmen in Pakistan. While Sharjeel took the role of being the aggressor, Babar was happy farming the strike. From 10 for 1 in the third over, they took Pakistan to a position of being stable in their chase at 140 by the 24th over. Sharjeel and Babar added 130 runs for the second wicket, which came off exactly 22 overs and at a run rate of 5.90.

Once again, Pakistan s many mistakes: Apart from the first-over drop, there were several instances wherein Pakistan looked in bad light. Mohammad Aamer dropped a sitter when Warner was on 132. The fielding in the outfield remained poor with Australia getting a few boundaries which should ideally have been protected. Akmal gave four extra runs via overthrows.

Mitchell Starc back among wicket-takers: For the first time in the ODI series, even though in the final game, Starc made his presence felt. Starc began collecting wickets by trapping Pakistan captain in the third over of their chase. He then returned in the middle overs to bounce Sharjeel out, surprising the batsman on a short delivery when he was on-song. Starc pegged Pakistan back once again when he immediately had Hafeez caught in the first slip, and claimed his final wicket in the form of Wahab Riaz. 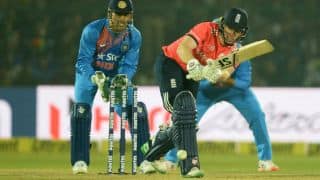 Eoin Morgan completes 1,500 runs in T20Is during India vs England clash at Kanpur