Pakistan will look to avenge their Asia Cup T20 2016 defeat, when they take on Bangladesh in Match. No 14th of the ICC T20 World Cup 2016 at Eden Gardens.

After an enthralling opening to the Super 10 stage of the ICC World Twenty20 (T20) 2016 with New Zealand upsetting India, all eyes are now focused on the all- Asian affair between Pakistan and Bangladesh. Pakistan having won the trophy in 2009, will want to prove their detractors wrong and make a case of their defeat by the hands of Bangladesh in Asia Cup T20 tie earlier this month, where Bangladesh will look to continue their winning momentum and prove that victory in the Asia Cup was no fluke.  Bangladesh are already high and running after passing thought the Round 1 of the tournament and Pakistan coming of their warm up success, ensuring that Match No 14th from Group 2 promises a lot. Vishal Mehra takes a look at the possible battles to watch out for.  LIVE SCORECARD: Pakistan vs Bangladesh,14th T20 Match, Super 10 Group 2, ICC T20 World Cup 2016

Mohammad Aamer vs Tamim Iqbal: Aamer has been an inspiration for cricketer in and around the world, making an astounding comeback after serving ban from the game. Since his rejoining Aamer has only cemented his place as one of the best young talent Pakistan has ever produced. Given his T20 performance so far, it is highly likely that Men in Green will depend on Aamer to give them a rocking start. Tamim on the other had has been destructive since his return from paternal leave, hitting first ever T20 century for Bangladesh against Oman in Round 1 match. Tamim’s batting has only provided Bangladesh the much needed stability at the top, which Aamer will surely want to break.

Sabbir Rahman vs Mohammad Ifran: Sabbir has been Bangladesh’s go to man in the past many matches, striking runs at will and with comfortable ease. Sabbir hit a match momentum changing 44 runs against Oman in their Round 1 final match. He was at top of the list in  Asia Cup T20 2016 leading runs list. Ifran on the other hand looked a bit out of sorts in the Asia Cup 2016, is slowly coming into his merry face and length. Ifran in Pakistan’s warm-up match against Sri Lanka gave away just 18 runs picking up two crucial wickets.

Mashrafe Mortaza vs Shoaib Malik: Bangladesh’s skipper Mortaza has been amongst both wickets and run for his team since the Asia Cup 2016, guiding them to wicket the last time he played Pakistan. Mortaza has been very economical in his bowling and is seen as an proactive captain as well. Pakistan will bank on the experience of Shoaib Malik to come strong for them in this match. Malik has so far been an on/off player this season with a need to permanently bring his A game on if Pakistan has any changes of doing well in ICC T20 World Cup. Malik’s batting skills will surely be matched by Mortaza’s ability to bowl impeccable variations.

Shakib Al Hasan vs Sarfraz Ahmed: Both Pakistan and Bangladesh success lies on Shakib and Sarfraz performances, easily the marquee players of both teams respectively. Shakib has since long been their pivotal player with the bat and ball, with bowling doing tad bit better off late. To be noted his skills with the bat is not too bad either. Sarfraz on the other hand is the most sensible and calm batsmen in the Pakistan team. Opting for Sarfraz to come up the order has only made his batting flourish with more time in the middle. Shakib, the maverick he is always looks to bog down opposition teams star players, will surely eye Sarfraz making it a fight worth to vouch for.

Taskin Ahmed vs Mohammad Hafeez: In the absence of Mustafizur Rahman, Taskin Ahmed has very ably taken the role of opening pace early on. Taskin has been in the news for all the wrong reasons lately and will look to shrug off any such discrepancies and focus on the getting Pakistani openers cheaply. His ambition will only to stopped by Pakistan’s professor Mohammad Hafeez, who is slowly but steadily coming back to form, with a sturdy knock of 70* off 49 balls against Sri Lanka in their warm-up. Hafeez, will want to make good use of the opportunity that the team management has showed in him, as this might be last time he could be seen playing in the World T20 event. 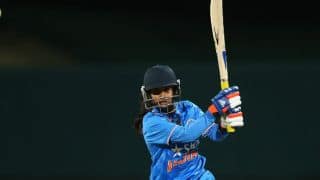 Video: The much-awaited teaser trailer of ‘MS Dhoni – The Untold Story’ is out