England are very likely to leave out Jos Buttler to accommodate James Taylor and bring in Chris Jordan after an injury to Mark Wood.

With the second Test ending in a dismal performance, England will look to play for pride and at the very least and level the series by winning the third and final Test against Pakistan at Sharjah. After nearly winning the first Test England batsman were outfoxed by the spin of Yasir Shah in the second, who is now training with England arch nemesis Shane Warne. England will look to bounce back with collective effort from all batsmen. With the pitch at Sharjah more batting friendly than the first two, it might seem easy for England to bat the days away. England is likely to go the same side apart from one or two change in its batting line-up.  SCORECARD: Pakistan vs England , 3rd Test match at Sharjah

Top Order: Alastair cook who tops of the scoring chart (both teams combined) with 338 runs to his name is a sure shot to open the batting for England. After England head coach Trevor Bayliss showed his support for Moeen Ali, he is guaranteed to open with Cook. After a good show in the 2nd innings in the 2nd Test, Ian Bell will look to score big.

Middle Order: Joe Root can do no wrong and is having the time of his life batting at No.4 and would be foolish to remove him from this spot. Root has been the only consistent batsman for England, making 3 half centuries in the series so far. Jonny Bairstow, who had decent outing in the second Test is looking to also take on the mantle of wicketkeeping with Bayliss indicating that Jos Buttler might not be picked for in the team. Buttler is having a torrid time with the bat averaging a mere 13 post the Ashes. James Taylor can come in for Buttler, who last played a Test for England in 2012. Ben Stokes will fill in the all-rounder’s spot in the team.

Lower Order: Stuart Board and James Anderson pick themselves in the playing XI without an inch of a doubt. Adil Rashid will want to keep his wicket-taking ability at it’s very best if England will have any chances of restricting Pakistani batsman for a low total. Mark Wood who has been ruled out due to an injury is to be replaced by Chris Jordan in all probability  With Ben Stokes and Moeen Ali to help out the in the bowling department, it looks a decent enough attack.

(Vishal Mehra is a reporter at CricketCountry, who enjoys his weekly dose of anime refreshment and plays cricket once a white moon. His twitter handle is @vishal_oxyjinn) 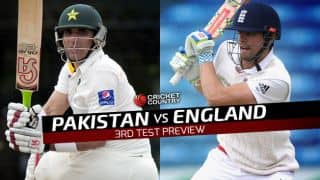