A captain’s role is one of the toughest and most important in a team. Not just with batting or bowling, his leadership qualities come to the fore. It is generally seen, if the captain is confident, the team feels confident. If the captain performs well, whole team’s morale is lifted. And that is the sort of influence Misbah-ul-Haq has left on his teammates during Pakistan’s first Test against England at Lord’s. On his very first Test at the ‘Home of Cricket’, and that too as a captain, he displayed tremendous leadership to score a century, and help Pakistan post a respectable score on the board in the first innings. LIVE CRICKET SCORECARD: England vs Pakistan , 1st Test match at Lord’s

Misbah’s century was something different and special, considering the situation when he came in. With score at 77 for 3, he came to the crease with Pakistan in a precarious position. He played some exemplary shots, showed his classic defense and never lost his guard during his innings of 114. Barring Asad Shafiq, who scored a valuable 73, no other batsman stuck to the task alongside the Pakistani skipper.

Such a knock from Misbah reminded of two similar knocks, in similar situation from Sourav Ganguly and MS Dhoni. Ganguly was India captain during their tour of Australia in 2003-04. In the first Test at Brisbane, Australia posted a decent total in the first innings, and in reply, the Indian top-order was found wanting. It seemed the hosts will take the game away. But then came Ganguly, and he changed the whole scenario. ALSO READ: Misbah-ul-Haq: Man who defies convention

He played a skipper’s knock, scoring 144 to help India go past their opponent s total. His innings brought confidence in VVS Laxman, who supported him with a solid 75 during his stay at the crease. This innings from ‘Dada’ helped India save the Test from a losing position.

Similar was the knock of MS Dhoni against Australia in 2012-13, if not better. In his case though, the likes of Virat Kohli and Sachin Tendulkar got runs, but his knock was absolutely sensational. Scoring 224 from just 265 balls not only helped India post a good score, but also proved as the catalyst to win. ALSO READ: Misbah redefines fairytale at Lord s

Misbah’s knock was surely reminiscent of the two above stated knocks. It was not about the century, but it was about how he took control of the situation being the captain of the team. Considering it is his first ever tour of England, the pressure would have been on him. But his knock proved otherwise.

Whatever may be the outcome of the first Test at Lord’s, one thing which came to notice was his true leadership skills. Even if Pakistan fail to get anything from this game, their morale will be boosted by Misbah’s innings, and surely, the other players will step up to the task to match their skipper. 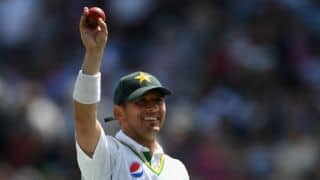