Rafatullah Mohmand made his T20I debut at the age of 39 years and 20 days.

When Rafatullah Mohmand made his Twenty20 International (T20I) debut in the first of the three-match T20I series for Pakistan against England at Dubai International Cricket Stadium, he created a record by being the oldest T20I debutant from a Test-playing nation. Rafatullah, 39 years 20 days on debut, went past the record of Rahul Dravid, who had made his debut (it was his only T20I) at 38 years 232 days. Rafatullah was, thus, 153 days older than Dravid at the time of their respective T20Is debuts. They are the only ones from Test-playing nations to make T20I debuts after 38. In all, Rafatullah stands sixth in the history of T20Is, after Mohammad Tauqir of UAE (43 years 176 days), Khurram Khan of UAE (42 years 269 days), Najeeb Amar of Hong Kong (42 years 172 days), Munir Dar of Hong Kong (40 years 14 days), and Sunil Dhaniram of Canada (39 years 290 days). Between Rafatullah and Dravid is Sanjayan Thuraisingham, also of Canada (38 years 326 days). Rafatullah also set a new high for Pakistan, going past Inzamam-ul-Haq s previous record of 36 years 178 days. Tauqir also holds the world record for the oldest cricketer to appear in a T20I (at 43 years 179 days), Brad Hogg coming second with 43 years 45 days. Rafatullah comes second even on this list among cricketers from Test-playing nations, after Hogg, Sanath Jayasuriya (41 years 360 days), Brad Hodge (39 years 91 days), and Tillakaratne Dilshan (39 years 28 days). Rafatullah is currently 39 years 24 days, and has a genuine chance of going past both Hodge and Dilshan.

As mentioned above, Rafatullah is now ahead of Inzamam by the proverbial mile, putting a clear two-and-a-half-year barrier between them. They are the only Pakistanis to have made T20I debuts after 36, or even 35.

What, then, about all nations? Who are the oldest T20I debutants from each country? Ranji Trophy 2015-16: What each team needs to do to qualify for quarter-final 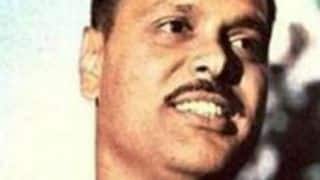