It has not been even a week that Pakistan registered a famous victory on England at The Oval to level the series 2-2. But given the form that Pakistan team has been in ODI’s is very disappointing. Since the 2015 World Cup they have been captained by Azhar Ali who suffered a 3-0 whitewash at the hands of Bangladesh before two series wins over Zimbabwe although they lost a match to them in Harare and one against Sri Lanka. They took the lead against England last year before being comfortably beaten 3-1 and were overturned 2-0 in New Zealand in January. FULL CRICKET SCORECARD: Pakistan vs England, 1st ODI at The Rose Bowl, Southampton.

Pakistan may need to strike a balance between giving some of new arrivals, and those who have been sidelined during the Tests, some cricket and ensuring they do not take a half-hearted approach to these matches. Sharjeel Khan has been called up after a successful A-tour of England, while Umar Gul has the opportunity to show he can still deliver his pinpoint yorkers. ALSO READ: England announce ODI squad vs Pakistan; Ben Stokes, Mark Wood return

Top Order – Azhar Ali regained his form in the final two Tests against England, making a fine century at Edgbaston, a solid 49 after being promoted to open the batting and then finished the series with a six. But the Pakistan ODI skipper has to focus back to trying to find a winning formula in one-day cricket. And he needs to score runs as well. Sharjeel Khan has got off to good starts in the past, but he has not always grabbed on the opportunity. Mohammad Hafeez has been in disappointing form in Test’s against England. So his inclusion can be a dicey thing for Pakistan. But having said this, Hafeez has the quality to get going if he stops irresponsible shots. Sami Aslam should might be given a chance instead of Baber Aslam as Sami has shown his batting credentials for Pakistan. ALSO READ: Pakistan vs England: Misbah-ul-Haq vows to leave Test legacy

Middle Order – Shoaib Malik will be the anchor of the Pakistan’s middle order. Having someone as good as Malik will be really helpful for Pakistan as he comes in with lot of experience which is must for a young team of Pakistan. Sarfraz Ahmed did good amount of batting in Test series and so he would have got accustomed to the bounce and pace of the wicket. He also played a good knock in the final Test at The Oval against England so he likely to get picked up instead of Mohammad Rizwan. Imad Wasim might get picked up in the team as the all-rounder. Pakistan would want to keep an extra spinner with them as the wicket can be helpful for spinners and assist Yasir Shah.

Lower Order – Pakistan will for surely go ahead with Mohammad Aamer, Wahab Riaz, Yasir Shah and Umar Gul who was included in the ODI squad. Except for Gul all other have played in the Test series against England  and Gul himself comes with lot of experience of international level cricket. So it is very likely that Pakistan will go ahead with these 4 bowlers as their spear attack against Ireland. 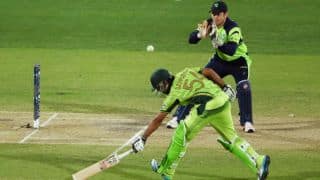 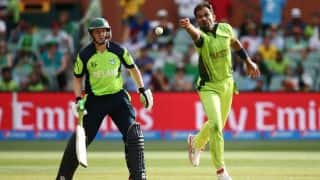