Pakistan are the side which can be extremely atrocious on a bad day.

Pakistan will take on New Zealand in the first Test of three match series at Abu Dhabi on Sunday. Recently, the hosts had humiliated Australia in the two-match Test series, and they will be the favorites to win this match. However, Pakistan are the side which can be extremely atrocious on a bad day, and a New Zealand victory cannot be ruled out. Sameer Jha looks at some of the key battles that may decide the fate of the match.

1. Younis Khan vs Trent Boult: Younis Khan has been in terrific form for Pakistan, scoring three consecutive hundreds (including a double hundred) in the recently concluded Test series against Australia. He is likely to play a key role in helping Pakistan reach a big total. He will face stiff resistance from Kiwi bowler Trent Boult, who is capable of some superb swing bowling.

2. Misbah ul-Haq vs Tim Southee: Misbah ul-Haq who has been criticised for being very slow in scoring runs in Test cricket, silenced his critics once and for all, by equalling the record (set by Viv Richards) for hitting the fastest century in Test cricket. Misbah took just 56 balls to reach his century, and embarrassed the Australian bowlers. He would look to  inflict similar treatment on the Kiwi bowlers, but may find the going tough against Tim Southee. The 25-year old Kiwi, is capable of bowling with lethal accuracy that could trouble Misbah.

3. Brendon McCullum vs Zulfiqar Babar: Brendon McCullum’s doggedness and determination was on full display as he scored a majestic 302 to save a Test match early this year. If he manages to play a similar innings, it’ll sap out the energy from the Pakistani players, and make losing unlikely for the Kiwis. McCullum will have to contend with Zulfiqar Babar, who had the Australians bamboozled during their tour to United Arab Emirates (UAE). Babar is bowling with a lot of guile and skill, and he may well prove to be a nuisance for McCullum and other Kiwi batsmen.

4. Kane Williamson vs Yasir Shah: Kane Williamson is probably New Zealand’s best player of spin and he will be the key batsman for the visitors. Yasir Shah, whose bowling has impressed even the legendary Shane Warne, will be hoping to take the prize wicket of Williamson and help his team to keep the Kiwi batsmen quiet. Shah has shown his skill on the Abu Dhabi wicket, and it’ll be up to Williamson to match fire with fire. 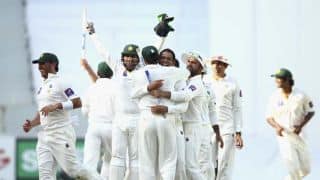