Here are some of the key clashes which can turn to be decider in the first day-night Test between Pakistan and West Indies.

Pakistan takes on West Indies in the first Test at the Dubai International Cricket Stadium, Dubai in the three-Test series in what can be anticipated as crunch of a series. Pakistan have had a very contrasting Test results as compared to their counterparts. The hosts (Pakistan) may not be the top team in Test rankings as they lost it to India, but still have the aura of being the former top team and they will be looking to carry on that aura when they step down to face West Indies in what will also be a pink-ball Test. The expectations are high from this series as this is a redemption time for the visitors as they are yet to win a single match since the time they have landed in UAE.

On the other hand, the hosts are touted to be the clear favourites after they drew the four Test match series against England at 2-2. West Indies had to suffer defeat against India in their own land after which they haven’t had a good time of cricket except the win in the Twenty20 International (T20I) match against India. So will the hosts, who have won six consecutive matches carry in with their winning streak or will the visitors gain something positive from this. Keeping these things in mind, here are some of the key clashes that should play a vital role in the first Test.

Babar Azam vs Jason Holder – Babar Azam announced himself in style after hitting three consecutive half-centuries in the One-Day International (ODI) series. It has looked impossible for the Caribbean bowlers to stop this run machine and now in the longest format of the game, the West Indian skipper should take up the responsibility. He has looked in peach of a form as he was seen middling the ball from the very first that he played. Having played such classy innings, he is bound to be with full confidence level and if he gets going again, then it will be difficult for the visitors to stop him.

So it will be very vital that the visitor s captain himself leads from the front and implies tactics to make sure that Babar doesn’t get into his strides and that he is sent back to the dressing room as quickly as they can.

Mohammad Nawaz vs Darren Bravo – Darren Bravo struggled in the home Tests against India, but he will be encouraged by the fact that his overseas average (51.18) far exceeds his average at home (29.35). He comes into the series with a bit of form behind him, with an innings of 61 in the second ODI and a 97 for the West Indians in their tour game against the PCB Patron’s XI in Sharjah.

Left-handed all-rounder Nawaz, who impressed in the limited-overs leg against West Indies, is likely to make his Test debut. Nawaz will be mostly sharing the spin attack with Yasir Shah and it will be a very worth watching contest as Bravo will try to score some much needed runs for himself and the team while on the other hand, Nawaz would try to continue with the same form that he displayed in the 50 overs format of the game.

Sarfraz Ahmed vs Carlos Brathwaite: Sarfraz has been the silent assailant in the Pakistani side. He has piled some crucial runs with his unorthodox style of play and put the opposition under pressure. He played exceptionally well in the ODI series in England and scored an unbeaten in the only game where he got a chance to bat in the T20I series against West Indies. Brathwaite on the other hand has gone for runs but at the same time has the ability to chip wickets with his canny variations.

With the format changing to Tests, this will be a different contest as to who’s persistence pays off the most as both have had contrasting limited overs series so far, wherein Ahmed was bang on target, while Carlos has struggled continuously.

Yasir Shah vs Marlon Samuels These two are regarded as the main arsenal in their team. Yasir had put the England team in bothering spot which made him rise like a phoenix, while Samuels hasn t been in the best of his form in the recent past. In a situation wherein one is already at his best, the West Indian power house will have to come in strong to destroy Shah s line and length and this is bound to be a very competitive contest between the two. 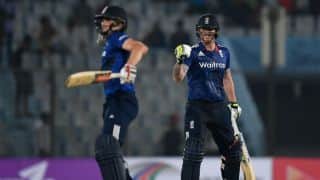