At one point the hosts were struggling at 154 for 6, but an unbeaten stand of 132 runs between Chase and West Indies skipper Jason Holder (58*) assured the hosts posting a challenging total at the end of days play.

Riding on Roston Chase s impressive second Test century, West Indies posted 286 for 6 at the end of Day One in the second Test against Pakistan at Barbados. At one point the hosts were struggling at 154 for 6, but an unbeaten stand of 132 runs between Chase and West Indies skipper Jason Holder (58*) for the seventh wicket assured the hosts of posting a respectable total at the end of days’ play. Mohammad Aamer (2 for 52), Mohammad Abbas (2 for 47), Yasir Shah (1 for 83) and Shadab Khan (1 for 90) shared the 6 wickets among them in the first two sessions, but some great display of determination and resolve to resist, from Chase and Holder saw the last session of the day going wicketless and West Indies scoring 120 runs. Let s have look at some of the highlights of the day s play that grabbed the attention: Full Cricket Scorecard: Pakistan vs West Indies 2nd Test at Barbados

West Indies top-order falters; yet again: The hosts had seen their entire top-order batting falter in the series opener. They looked clueless against the fiery spells from Aamer and Abbas. But still, the Caribbean side persisted with the same starting XI at Barbados and the move took to have backfired soon. Kraigg Brathwaite was the first to depart and this triggered the West Indies batting collapse, as Shimron Hetmyer, Shai Hope, Vishaul Singh all departed quickly one after the other leaving the side crumbling at 37 for 3.

The not so costly drop: Mohammad Aamer, since his comeback, has seen several catches being dropped off his bowling. But in the series opener, out of 7 wickets, he cleaned up the batsmen four times while Younis Khan took two catches and wicketkeeper Sarfraz Ahmed took one. It felt like Pakistan had finally got learnt the art of catching, especially off Aamer s bowling. But in the second Test, Ahmed Shehzad proved it wrong. Brathwaite was having a hard time dealing against the swingers from Aamer. Seeing his struggles against Aamer, Misbah got in a short cover, hoping to get the first breakthrough. The plan worked very well as Aamer bowled an away swinging delivery which Brathwaite tried fending in a very awkward position but all he managed was a leading edge which flew straight to Shehzad at short cover.

But, Shehzad spilled the easiest of catches. Aamer, with a disappointed look, went back to his bowling mark. Luckily for the bowler, two deliveries later Brathwaite edged it again but this time to Sarfraz who made no mistake in grabbing hold of the ball.

The nervy wait for maiden wicket: Shadab Khan had blown away the entire West Indies batting in Twenty20 Internationals (T20Is) and One-Day Internationals (ODI). On the same promise, he was selected in the Test series but did not play the first Test. But at Barbados, he was opted instead of Wahab Riaz.

Misbah got Shadab in to the attack in the 19th over. But the change in format saw the change in batsmen s approach towards him. Shadab didn t look effective and gave away runs as well released the pressure that was built initially. He had to wait for his maiden Test wicket for 59 deliveries. It was the last delivery of 10th over that saw Dowrich edging a leg break to Younis at first slip.

Chase and Holder holding things together: West Indies were 166 for 6 at the start of the third session. All hopes were not lost as Chase and Holder were still at the crease at 70* and 0* respectively. But Pakistan bowling looked lethal. They had dominated the previous two sessions dismissing six West Indies batsmen. If any of these two would have been dismissed early in the last session, West Indies tail was wide open to bundling out.

But this two batsmen presented a great batting display. Despite being put on the backfoot, Chase and Holder resumed with optimism. They defied swing bowling from Aamer and Abbas. They nullified Yasir and Shadab s guile. Once they eased in the game, runs came easy. The played some glorious shots down the ground as well as over the fielders. This in return frustrated Team Misbah and soon followed up some sloppy fielding. The pressure was built slowly and steadily and as the day ended, Chase walked back making X sign with his hands to celebrate his century in front of his home crowd. 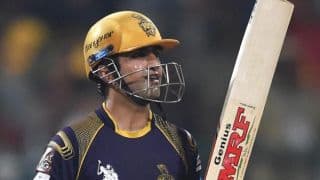