It is not a surprise that not many current Pakistani cricketers have found a place or even competed for a place in this illustrious XI.

Many of the Pakistani cricketers may continue to remain in a denial mode about their No.9 ranking in ODIs but the fact remains that the subcontinent giants are no longer the dangerous limited-overs unit that they once were. It is not a surprise that not many current Pakistani cricketers have found a place or even competed hard for a place in this illustrious XI.

While Pakistan have lost 1-4 in the just concluded series against England, Suvajit Mustafi looks at the 1992 World Champion’s all-time ODI side.

Graceful and wristy, Anwar’s batting was a treat to eyes. Left-handers typically make batting look pleasing to the eye and Anwar was another addition to the classy bandwagon who have graced the game. Anwar scored at a brisk pace but his batting was more about timing and placement than power. For over a decade Anwar’s authoritative 194 was the highest score in ODIs till Charles Coventry scored 194 not out. Later, Sachin Tendulkar, his arch-rival, slammed the format’s first double-hundred.

Anwar is an automatic choice for the opener’s role.

At 16, Afridi bludgeoned his way to the then-fastest hundred in ODIs. In a career spanning close to 20 years, Afridi had amassed over 8,000 runs and claimed almost 400 wickets. Frustrating, enthralling, mesmerising, ordinary, keep the adjectives coming. An enigma, Afridi is one of his kinds.

In the late 90s, Afridi has opened with Anwar and the pair inflicted a lot of damage together. His inconsistency makes up for his strike-rate. He will be expected to blaze at the top. In fact, he has registered every single one of the 9 fastest fifties scored by Pakistanis. However, his real role will be with his leg-spin and zooters.

One of cricket’s original street-fighters, Miandad is the best batsman Pakistan have produced. He was tactically brilliant, and apart from his batting skills, his mental strength and calculative approach that made him stand apart. His last-ball six against India to clinch the Austral-Asia Cup in Sharjah in 1986 will forever be remembered as one of the greatest ODI knocks. In the 1992 World Cup that Pakistan won, he scored 6 fifties.

Miandad was excellent with placements and running between the wickets, a hallmark of a good ODI batsman. The fulcrum, Miandad bats at No. 3 in this side.

Zaheer was called Asian Bradman for a reason. Brilliant to watch, hunger for runs (he averaged 42) and ability to score them at a brisk pace makes Zaheer possibly the best ODI batsman Pakistan have produced. It is unfortunate that the likes of Mohammad Yousuf and Misbah-ul-Haq do not find a place in this side despite their wonderful record but Zaheer seals the No. 4 spot. You do not argue with the selection of a man with an average of 48 and a strike rate of 85.

Shoaib Akhtar has petrified the best of batsmen during his days but recently revealed that his teammate Inzamam-ul-Haq was the most difficult batsman he bowled to. It was under Imran Khan’s captaincy Inzamam took his formative steps in international cricket and the legendary all-rounder hailed him as the best player of fast bowling and often rated him more talented than Tendulkar. Opinions may vary and Inzamam does not need testimonials.

A heavyweight, literally and as a figure in Pakistan cricket, Inzamam’s batting was a fine mix of touch and power. He knew this format better than the most and mastered the art of pacing an innings. Minus the apparent lethargy and the hilarious run outs, Inzamam could have gone in the annals as one of the finest. Never mind, he has done enough to be regarded as a great and is an easy choice for No. 5 in this side.

A heartthrob and a larger-than-life character, Imran Khan is the greatest cricketer to emerge from Pakistan. Period. Imran could bat anywhere in the order, and could both anchor innings and decimate opposition attacks. He was capable of striking lusty blows or play the waiting game if required.

His role does not end there. He will come in as the first-change bowler (the fact that one of the most-feared fast bowlers will not get the new ball gives an indication of the depth of the attack). Imran could bowl fast, and could move the ball, both old and new, prodigiously. Of course, as Pakistan’s only ODI World Cup winning captain, he is also the obvious choice as the captain.

The presence of Imran and Afridi also mean there is no place for Abdul Razzaq.

Moin Khan and Rashid Latif were good contenders for this position but Sarfraz makes the cut because he is a superior batsman. The team, laden with two quality all-rounders, have only four specialist batsmen; therefore, the role of a wicketkeeper-batsman becomes all the more important. The current Pakistan vice-captain is a sound and intelligent batsman, and very reliable behind the stumps.

A master of seam and swing, Wasim is one of the greatest bowlers the game has witnessed and perhaps the best-ever left-arm pacer. He could bowl wherever he wanted to, move the ball away like only a wizard could, and all that at reasonable pace.

Wasim was also a decent batsman with a Test double-ton and 6 ODI fifties. Apart from his quota of 10 overs, his lusty blows towards the end will be an added advantage.

It is funny that this needs a mention, but Wasim will get the first share of the new ball.

We talk of batsmen making the art look good, but Waqar injected sootiness to watching a fast bowler run in. Facing him was certainly not the same. Seriously fast, Waqar was a master of reverse-swing and the searing in-swinging yorkers.

While Akram can stifle down the scoring and bamboozle batters with six different balls in an over, his chief partner-in-crime, Waqar had the ability to run through sides. Expectedly, the duo will share the new ball. Nobody, not even Muttiah Muralitharan, has come close to his 13 five-wicket hauls.

At his prime Shoaib used to give sleepless nights to the best of batsmen in the world. Possibly the fastest bowler the game has seen, Shoaib was much more than just express pace. He had an excellent yorker, could move the ball, and later added a slower delivery to his arsenal. His numbers, too, are not much inferior to those of Wasim and Waqar.

The attitude and aura added to the menace — making Shoaib one-of-a-kind. Shoaib’s smartness, combined with his intimidating nature made him a serious threat. He was a genuine match-winner of the era.

Sorry Saeed Ajmal, despite the fantastic record the prolific off-spinner loses the race to his predecessor. Saqlain Mushtaq, who held the record of the fastest to 100 ODI wickets till very recently, is the first bowler to master the art of doosra. You ought to be special when you become a case study for the likes of Murali, Harbhajan Singh and Ravichandran Ashwin.

Saqlain’s variations and intelligence made him lethal in limited-overs cricket. An astute thinker, Saqlain varied everything, including his run-up (he often delivered from behind the stumps at the bowler’s end to confuse the batsman in flight), his change in flight and length, or the sheer extent of his turn.

Imagine a fast bowling attack that comprises the skills of Wasim and Imran, ferocity of Waqar and pace of Shoaib combined with the guile of Saqlain and the unorthodox leg-spin of Afridi. No ODI bowling unit can look better. 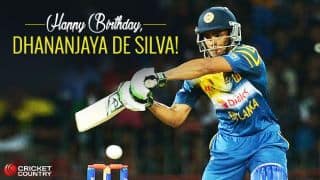