Youngsters like Parvez Rasool and Ambati Rayudu need to be given a long rope, once selected for national duty

Youngsters like Parvez Rasool and Ambati Rayudu need to be given a long rope, once selected for national d

The Indian team selectors should announce a squad for a complete series and refrain from picking one for just one or two games, be it Tests or ODIs, writes Jaideep Vaidya. The squad that is picked at the beginning of a series should be entrusted enough to be in contention for the entire series. 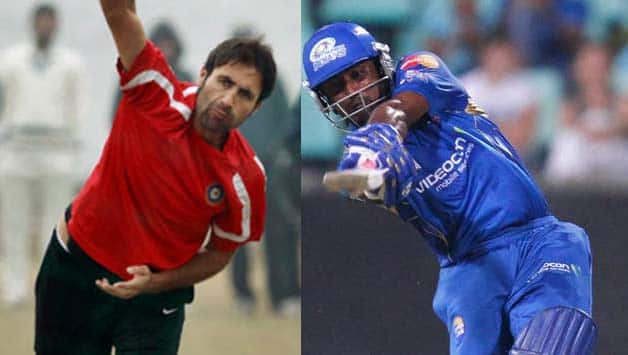 Parvez Rasool (left) and Ambati Rayudu, both, could stake their claim for the much coveted No 6 spot – albeit Rasool would be more suited a couple of slots down the order in the Indian team © PTI & AFP

The Indian team selectors should announce a squad for a complete series and refrain from picking one for just one or two games, be it Tests or ODIs, writes Jaideep Vaidya. The squad that is picked at the beginning of a series should be entrusted enough to be in contention for the entire series.

Twenty-three-year-old Jammu & Kashmir all-rounder Parvez Rasool followed up his blistering form in the Ranji Trophy 2012-13 with a seven-wicket haul against the touring Australian side in a warm-up match.

Among Rasool’s victims were batsmen of the inexperienced, yet skilled, calibre of opener Ed Cowan, stand-in captain and wicketkeeper-bat Matthew Wade, and the impressive Steven Smith. True, Rasool still has to be tested against the big guns in Michael Clarke and Shane Watson; but taking seven Australian wickets in an innings is more than a noteworthy feat. As an added bonus, the lad can swing the blade a bit too. He has, after all, scored 594 runs apart from taking 33 wickets in the domestic season.

Also highly impressive of late has been the slightly older Baroda skipper, Ambati Rayudu. After scoring an eye-catching, title-grabbing ton in the Irani Cup even as the selectors announced the squad for the first two Tests against Australia, Rayudu, 27, would definitely have gotten the five wise men of Indian cricket to look up and take notice with his fluent 87 against the Aussies. What makes the second knock more impressive is the fact that it came against four bowlers who are almost certain to make the playing XI on February 22 in Chennai — Peter Siddle, James Pattinson, Jackson Bird and Nathan Lyon.

Rasool and Rayudu, both, could stake their claim for the much coveted No 6 spot —  albeit Rasool would be more suited a couple of slots down the order — in the Indian team, which is more than likely to go to Ravindra Jadeja in the first two Tests. But if the frizzy-haired, one-Test all-rounder fails, a string of players would be snapping at his heels — Suresh Raina, Manoj Tiwary, Yuvraj Singh, Abhishek Nayar, to name a few — and a swap is almost certain.

It’s all to play for in Chennai and Hyderabad, and this is exactly what’s going wrong with Indian cricket.

If India has to crawl back to the summit of the Test rankings, the selectors need to give a long(er) rope to the young players coming in. Any newcomer would require a little time to settle in and get into the groove. Selecting him for a couple of games and dropping him if he doesn’t perform does not only hurt the rhythm and balance of a side, but also severely dents the player’s confidence.

The selectors need to give the newcomers the confidence that they are in the team for these many games. They need to remove the fear of being dropped from the players’ heads, and allow them to play freely. The uncertainty in selection and the constant shuffling of the side within a particular series must certainly be playing on the youngsters’ minds and hanging over their heads like the sword of Damocles.

Former India captain Nari Contractor, in a recent chat with CricketCountry, said, “Give a long rope to the youngsters who you pin-point as having potential. It is no use playing you in one match and dropping you in the next. You need to give them the confidence that you are there [in the team for long].

“But when I know that if I fail, the sword is falling on my neck, it takes away half my ability,” Contractor added. “Any youngster that goes into the international field should be told that, ‘Look, for these five matches, you are definitely there in the team. Don’t worry about being dropped. You need to tell them, ‘You’re going to play this series whether you succeed or fail.'”

Unless a player performs miserably for an extended period, like in the case of sacked opener Gautam Gambhir, who failed to score a ton for three years, he should not be dropped from the side without being given a fair chance to prove himself. The selectors should not scuttle the potential once it is tapped. The players need to be given a long rope and, more importantly, they should know that they are being given a long rope.

The current scenario in Indian cricket is littered with examples of players being dropped after a couple of games. Ajinkya Rahane and Yuvraj Singh come to mind, during the recent ODI and Test series respectively against England. Cheteshwar Pujara, who was selected for the Australia series in 2010, was dropped after getting injured soon after. But after he was back from injury, and started scoring prolifically on the domestic circuit, his name wasn’t considered for selection for a long time. Bengal’s Manoj Tiwary is in the same boat.

Another former Indian skipper, Sourav Ganguly was spot on when he told Wisden India that the men in charge of Indian cricket should stop hunting for overnight replacements for Sachin Tendulkar and Rahul Dravid.

“Indian cricket has always produced talent, especially in batting, and the selectors will have to give youngsters a long rope,” Ganguly said. “All those involved with the game will need to realise that there can’t be overnight replacements for the likes of Dravid, Sachin and [VVS] Laxman. Every team goes through a rebuilding phase and now it is India’s turn.

“This was a generation of cricketers that produced exemplary cricket and lifted Indian cricket’s image overseas. Now, we have to allow young players to settle down and do well…I am a firm believer that just as quality cricketers came to the fore after Sunil Gavaskar’s retirement, so new faces will adequately replace the famed middle order.”

If Shikhar Dhawan and Ravindra Jadeja find a spot in the starting XI in Chennai, their names should be there, external factors excluded, on the team sheet for the final Test in Delhi too. For starts, the selectors could refrain from announcing a squad for just half a series — be it Tests or ODIs. Fifteen players who are picked at the beginning of a series should be deemed good enough to be in contention for the entire series. Picking a squad for just the first couple of matches of a series is bound to detrimental to the morale of fringe players, who are the team’s future.